Professor Emeritus Bob Diaz of William & Mary’s Virginia Institute of Marine Science has co-authored a new report—commissioned by the United Nations Environment Programme (UNEP)—that provides recommendations for managing the use of nitrogen and phosphorous in a world where the coastal waters of most developed nations suffer from excessive inputs of these and other nutrients, while developing areas in Africa, Latin America, and parts of Asia lack access to the nutrient-laden fertilizers needed to support growing human populations.

Diaz is the world’s leading expert on the low-oxygen “dead zones” that form when excess nutrients enter coastal waters and help fertilize blooms of algae. When these algae die and sink to the bottom, their decomposition by bacteria removes dissolved oxygen from surrounding waters, suffocating or ousting other marine life. 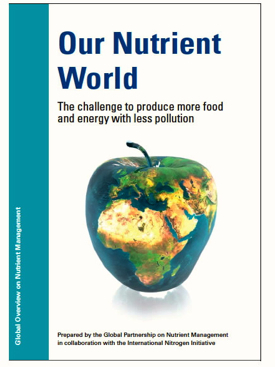 “Our Nutrient World” was launched at the UNEP Governing Council/Global Ministerial Environment Forum in Nairobi, Kenya, on February 18. It notes that while human use of nutrients has brought huge benefits—the nitrogen fertilizers of the “green revolution” support food production for about half the world’s 7 billion people—it has also “caused a web of water and air pollution that is damaging human health, causing toxic algal blooms, killing fish, threatening sensitive ecosystems, and contributing to climate change.”

The 128-page report, carried out by nearly 50 experts from 14 countries, suggests steps to reach a 20% increase in the efficiency of nutrient use by 2020, which would reduce the annual use of nitrogen fertilizer by 20 million metric tons. The authors term this global aspirational goal “20:20 for 2020.”

Their analysis shows how better use of nitrogen—through refined farming and industrial practices, more efficient use of fossil fuels, coordinated global actions, and other means—could save about $165 billion per year. This includes implementation costs as well as financial benefits from reduced nitrogen use and improvements to the environment and human health.

“We’ve identified 540 coastal systems worldwide that are suffering from nutrient pollution and low-oxygen conditions, with another 220 areas of concern,” says Diaz. “Steps to manufacture and use nitrogen compounds more wisely are critical components of any serious attempt to restore the health of coastal waters and their marine life.”

Diaz adds that coastal ecosystems are resilient—with 60 areas worldwide in recovery after management actions led to nutrient reductions and consequent increases in water clarity and oxygen levels. That holds promise for America’s largest estuary, Chesapeake Bay, where a “pollution diet” enforced by the U.S. Environmental Protection Agency now defines Total Maximum Daily Loads, or TMDLs, of nitrogen, phosphorus, and other pollutants for each state in the Bay watershed.

Pollution sources considered in the report include emissions from agriculture and combustion of fossil fuel. The report proposes a package of 10 key actions to reduce these pollution threats, and makes recommendations for shared action by governments, business, and citizens.  Key action items include:

Recognizing that nutrient use is a global problem, especially given the worldwide trade in agricultural products, the report calls for an intergovernmental framework to address these issues, and proposes a road map of how such an agreement would look.

The roadmap recommends a holistic approach wherein more efficient use of nutrients in one sector such as agriculture would benefit other sectors as well. For instance, more than 80% of manufactured nitrogen compounds are now lost to the environment. More efficient farming methods would not only reduce the energy needed to produce these compounds in the first place—almost 2% of current world energy use—but also lessen the amount of nitrogen-bearing gases that escape from soils to the atmosphere. One such gas—nitrous oxide—contributes 300 times more to global warming than a similar amount of carbon dioxide.

The report’s lead author, Professor Mark Sutton from the UK’s Centre for Ecology & Hydrology, says, “Our analysis shows that by improving the management of the flow of nutrients we can help protect the environment, climate, and human health, while addressing food and energy security concerns.”

Co-author Dr Bruna Grizzetti, based at CNRS/Université Pierre et Marie Curie in Paris, says, “The option of localizing agricultural production is a really important one. Crop and livestock farming are often separated by many hundreds of kilometers. Localisation helps improve nutrient recycling, reducing nutrient losses, while bringing the production benefits and pollution responsibilities closer together.”

In the report’s forward, UNEP Executive Director Achim Steiner echoes these comments, noting that the report “addresses the scientific complexity of how humanity can rise to these challenges and maximize the opportunities of improved nutrient management. Its preparation has forged new links between communities, gradually building a network of institutions and actors for better scientific understanding to support future decision-making in this field.”