The developed world’s seemingly insatiable thirst for the newest digital products generates a stream of electronic waste whose magnitude is truly staggering. U.S. consumers alone discard 130,000 computers every day, 100 million cell phones every year, and in 2007—the first year of the conversion from analog to digital televisions—26.9 million TVs with a total weight of 1 million tons.

During last week’s 33rd annual meeting of the Society of Environmental Toxicology and Chemistry, Mark La Guardia of the Virginia Institute of Marine Science presented results of research into the consequences of this “e-waste” stream—a study from South Africa of “brominated flame retardants,” synthetic chemicals used to fireproof the plastics that encase many electronic products.

“BFRs,” which include tongue-twisting compounds like polybrominated diphenyl ethers (PBDEs) and hexabromocyclododecane, are of concern because they have been shown to escape to the environment, where they accumulate up the food chain to impact animal and human health. They have an even more direct impact on human health through their presence in indoor dust.

La Guardia partnered on the study with VIMS professor Rob Hale, an internationally recognized expert in the source and impacts of BFRs. Hale has previously studied the distribution of BFRs within the U.S and China, and their prevalence and affects in fish, insects, and birds.

The VIMS team conducted the study as a follow-on to a request from Dr. Brent Newman, an ecotoxicologist with South Africa’s Council for Scientific and Industrial Research.

“Brent initially contacted us to gain help in analyzing sediment samples for historical  pollutants like PCBs, PAHs, and chlorinated pesticides,” says La Guardia. “They regularly monitor the concentration of these compounds in the tributaries that feed Durban Harbor, and were looking for a lab that was a little more sophisticated in what it could do.” Durban, with a population of 3.5 million, is the third largest city in South Africa and the continent’s busiest port.

Once La Guardia and Hale received the samples, they decided to analyze them for BFRs as well. “There’s very little research in the Southern Hemisphere on these chemicals,” says La Guardia. Previous studies have focused on the U.S. and Europe, where the compounds are most widely used; and on China, where most are manufactured and large quantities are released to the Pearl River Delta through waste streams from poorly regulated electronic manufacturers. 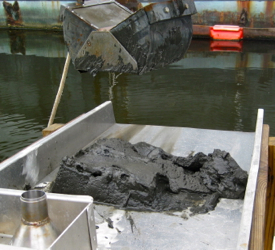 The pair’s analysis, conducted using a combination of ultra-performance liquid chromatography and tandem mass spectrometry, showed that BFRs were present in all 43 of their samples, with concentrations ranging from 114 to 47,000 nanograms per gram. The median values exceed those detected in San Francisco Bay, and are similar to values reported downstream of a North Carolina automotive interior manufacturer and in China’s Pearl River Delta.

“We found the highest sediment concentrations in samples from Durban Harbor, in streams that feed the harbor, and at a storm water drainage ditch near e-waste and automotive salvage operations,” says La Guardia. “That shows that BFRs are widespread in Durban’s urban environment and are being released from a diversity of sources.”

Because South Africa has few of the manufacturing operations typically associated with high levels of BFRs, La Guardia and Hale think the compounds are most likely entering the environment from consumer goods such as computers, cell phones, and TVs, as well as through poorly regulated e-waste and automotive-salvaging operations.

Like other developing nations with a rapidly growing domestic market for electronic devices, South Africa meets its demand by importing a mix of new and used goods. Although BFRs are not chemically bound into plastics and thus escape in minute amounts during everyday use, La Guardia says “we add to this by exporting outdated electronics to countries with poor environmental policies assuming that if they’re not reused they will be disposed of properly.

However, data from the United Nations shows that 15-30% of second-hand electronics that arrive in developing nations are in an “non-serviceable” state. This is despite the Basel Convention on hazardous wastes, an U.N. treaty that among other goals attempts to bridge the world’s ”digital divide” by encouraging the flow of still-usable electronics from developed to developing nations, while banning the latter’s use as a digital dumping ground. 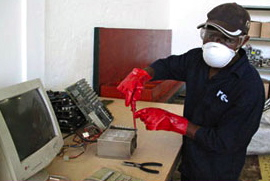 “Recycling” of e-waste in developing countries often takes place in unregulated dumpsites, where local inhabitants break apart and burn computers, TVs, and other electronic equipment to access copper and other valuable materials. In addition to their direct impacts on human health, these practices also hasten the release of BFRs and other toxic compounds into the soil, air, and water.

“Our study is a just a first step,” says La Guardia. “Given the region’s growing demand for electronic products and weak environmental policies, we think it’s important to continue investigating the environmental burdens and risks associated with BFR use in countries of the Southern Hemisphere. A recent study predicts that developing nations will dispose of more old computers than developed countries by 2016, so this problem is only likely to grow."