Since its founding in 1994, the William and Mary Middle Eastern Music Ensemble has hosted multiple guest artists from a variety of traditions.  This Spring they welcome musicians travelling from abroad for the first time.  Professor Jonathan Glasser has been playing with the ensemble since his arrival in Williamsburg in 2006.  This year, as part of his new tenure track position in Anthropology, he has been able to use professional development funds to support the residency of Nasreddine Chaabane and Amina Bensaad, musicians he worked with while doing fieldwork in Oujda, Morocco.

The ensemble’s director Anne Rasmussen said, “Most new faculty at William and Mary use start-up funds for equipment, materials, or their own research.  It’s unique that Professor Glasser is using his professional development funds to invite his musical colleagues from Morocco.  The ensemble has been hard at work learning a full program of ‘Andalusi’ repertoire and we are very excited to host these musicians.  The ensemble has hosted over 20 guest artists, but we’ve never had the opportunity for such a long residency.  We will all be speaking Arabic by the time they leave!”

The Ensemble will work with Nasreddine and Amina for two weeks of rehearsal and workshops in preparation for their concert on Friday March 30th.  Professor Glasser said, “Nasreddine 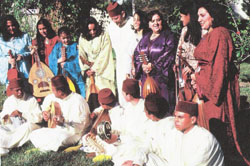 Chaabane and Amina Bensaad are leading musicians in the Moroccan city of Oujda and have travelled with their group ‘Association Ahbab Cheikh Salah’ to many places throughout North Africa and Europe.  This will be their first visit to the U.S. and I am excited that we will be able to introduce them to the Ensemble, the college, and the wider community.  The association that they run is dedicated to teaching young people the Andalusi tradition of North Africa, so in many ways this will be a perfect fit.”  Students in the ensemble as well as those in Professor Glasser’s senior seminar “North African Music” have been preparing for their visit all semester, and eagerly anticipate their arrival.  Ensemble assistant Tiffany Schoneboom said, “I’m so excited for the visit of Nasreddine and Amina.  This is an incredible opportunity for me to experience this music culture first-hand and I will benefit as an ‘ud player in the ensemble and a student in Professor Glasser’s senior seminar!”  At the end of the residency, Nasreddine and Amina will collaborate with William and Mary students a free concert of North African Andalusi Music at Williamsburg Regional Library Theatre on Friday March 30th at 8pm.