The following story originally appeared in the summer 2012 issue of the William & Mary Alumni Magazine - Ed.

Many come to the College of William & Mary to pursue degrees that they think will lead them to careers. Julian Oreska ’09 didn’t think his education would someday lead him to designing toys on the other side of the globe.

When Oreska returned to Williamsburg later in 2009 for the College’s Homecoming celebration, reconnecting with old friends led to a unique career. Oreska was searching for a permanent job in the United States after returning from an internship in Japan. He met Professor Rachel DiNitto from the William & Mary Japanese language faculty, who told him about a career forum in Boston for Japanese-English bilingual individuals interested in working in Tokyo, Japan. 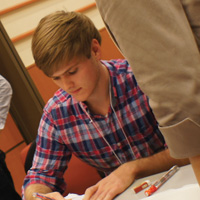 Upon looking into the event, Oreska noted that Bandai, a prominent Japanese toy company, was among the companies that would be conducting interviews. Because Oreska had been a fan of Bandai since the company introduced the Power Rangers craze to the U.S., he decided to apply. During the interview process, his enthusiasm for the company won him the position.

"I apparently surprised my interviewers with an ability to answer questions in detail regarding specific Bandai product lines,” Oreska says.

With Bandai, Oreska serves as an integral part in the creation of new toy lines. As a product developer, he does everything from brainstorming new ideas to designing the packaging for the final product — and he does this all in his second language. Although he began studying Japanese when he was a sophomore in high school, majoring in East Asian studies and business at W&M made for a heavy course load that prevented him from taking language classes until he was a junior. He credits immersion into the culture as the only way he was able to achieve the level of mastery he has now.

“With a language like Japanese,” he says, “there are a myriad of idioms and nuances that arise in different settings, which formal instruction cannot replicate.”

While Oreska believes the skills he learned in the classroom at the College have prepared him for working for a consumer production company, he still faces many challenges working abroad.

“Living in a country where you were not born speaking the language can be tiring,” Oreska says. “Daily communication is a battle to remember the right words and phrases at the moment they are needed.”

For Oreska, a Richmond native, living in Japan has required many adjustments. He enjoys the conveniences of living in Tokyo, since “just about anything one could need or want is either in walking distance or just a short train ride away,” he says. However, he also noted that “living in a country as population-dense as Japan can feel strange at times.” His one-room Tokyo apartment that measures about 9 feet by 9 feet is a stark contrast to the “trees and wide-open spaces” of Virginia. Additional concerns, from the inability to find certain staples of American cuisine to earthquakes, make living abroad a challenge.

American and Japanese business practices can seem nearly as different as the languages the two countries speak. While companies on both sides of the Pacific seek to create a profit, Oreska personally witnesses the different ways they accomplish this. For instance, Japanese developers are often expected to perform joukin, a practice that requires Oreska to explain his products to individual shoppers. The countries also differ in work ethic. Oreska says, “Late nights in the United States are becoming more of the norm for young, American businesspeople, but 14-, 15-, even 16-hour days are nearly universal at Japanese companies.”

Even though Oreska misses many things from home (namely, Chipotle and his class of 2009 group from West Barrett Hall) he believes his experiences at the College prepared him to succeed abroad:

“I feel very fortunate to experience the business climate and culture of Japan firsthand.”