Award-winning journalist and author Bob Woodward will speak at William & Mary on Nov. 5.

The event, which will be held in the Sadler Center’s Chesapeake Room, is free for faculty, staff and students with W&M identification. Public tickets will be sold at the 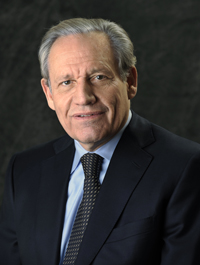 A graduate of Yale University, Woodward has also authored or co-authored numerous books, including 12 top national best-sellers. His latest book, “The Price of Politics,” focuses on how top-level political leaders from both the Republican and Democratic parties tried to restore the country’s economy.

The event at William & Mary is being sponsored through Alma Mater Productions (AMP), the university’s student programming board, and the Janet and Peter Atwater Lecture Endowment.