At a March Face 2 Face conversation, Professor Ravi M. Gupta (Religious Studies) and Professor William Hutton (Classical Studies) discussed their work and ideas, finding common ground in their roles as translators of ancient texts. Following is an abridged version of their conversation. The event was held in a classroom at the College's Wren Building.

Professors in the arts and humanities inhabit more than one world, and one of the most profound examples can be found in the act of translation. 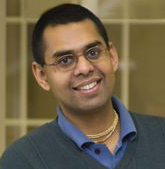 Gupta began, “There are three main texts that shape Hinduism today and over the last 1,000 years. My work focuses on one of these texts, the Bhagavata Purana, a philosophically sophisticated work of history and literature.” Written in Sanskrit, the text includes more than 14,000 verses with narratives of the history of the universe from creation to destruction, genealogies of kings, heroes, sages, and demigods, and descriptions of Hindu cosmology, philosophy, and geography. Gupta is writing both a primary text translation as well as a secondary literary explanation of the text.

“These are living religious texts and part of a family of texts that are actively used,” said Gupta. “There is no way to avoid the importance of this text in understanding how Hinduism is practiced today. It is also wonderful storytelling and great literature.”

"Translation is one way to open the door to creating a habit of independent thought.” - Bill Hutton

Is it different for ancient texts that are no longer in everyday use?

“Travel writing also includes great storytelling,” said Hutton, whose work focuses on the study of travel in Greece during the 2nd century C.E. In translating existing literary and archeological materials, he is examining the social and communication aspects of travel during this period. Hutton spoke about the materials he works with and how they could be considered the first novels in the Western tradition.   “Modern literature uses travel as a device to make characters encounter and discover things. The same was true back then.” 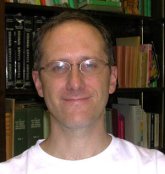 he greatest challenges of translation is, do you stick literally to the text or try to interpret what was meant at the time?” said Hutton. “The purpose of translation is to make a text useful, so it can’t be completely literal.”

“It is a huge struggle to try to capture the beauty of the language and convey the literal meaning,” agreed Gupta. “Sometimes the words are off, and you must strike a balance and work from the best meaning.”

Gupta outlined three components of translation: the poetic dimension (capturing the beauty in the language); the literal dimension; and the playfulness dimension, which is often the hardest to convey. Sometimes words or ideas may have a double meaning that can get lost.

“A direct translation can go one way, but then you must use different terms to show the sophistication of the words,” said Hutton. “It can be a challenge to preserve the general idea as well as the richness of the text.”

“You must also understand the time period of any ancient commentary on the original text,” said Gupta. “It’s like having a conversation across centuries.”

"Regardless of your access to an ancient language, without some capacity to translate, you can’t function in this world.” - Ravi Gupta

“Translation is an experience as much as a technique,” continued Gupta, who said he feels at home in translation after growing up in multilingual cultures in the United States and India. “It is so much more than communicating in words. It is also cultural assumptions and body language."

“The role of translation is so much more powerful than, ‘here is a book you can now read’; it is more ‘here is a culture,’” said Gupta. “In essence, we’re asking our students to become translators themselves. Translation is an act of active collaboration. Regardless of your access to an ancient language, without some capacity to translate, you can’t function in this world.”

“Students often bring misconceptions to the work,” said Hutton. “We need to break down those barriers. We want our students to take responsibility for what they know about the ancient world, which is not that foreign from what we are today. Translation is one way to open the door to creating a habit of independent thought.”

Gupta concluded, “There is a saying in Sanskrit, ‘No matter how well trained the acrobat; he can’t stand on his own shoulders,’ and this is what I hope my students can do. To stand on someone’s shoulders could be an act of domination or an act of playfulness. I think there is a wonderful opportunity to find that place of playfulness in what we do.”