When Jeff Eckert of the Virginia Institute of Marine Science’s Shark Survey called out that the team had caught a great white shark, VIMS graduate student Kaitlyn O’Brien wasn’t buying it.

“I didn’t believe him at first and I had to lean over the rail to see it myself,” said O’Brien.

You can excuse her skepticism. The capture of the 8½-foot immature male was only the fifth great white shark captured by researchers in the survey’s 45-year history of longlining in the waters off the Virginia capes.

That was on Thursday, June 7. On Friday, history repeated itself, as the survey crew encountered another, even larger, great white.

“When the second one came up, we noticed that lines were all tangled,” O’Brien said. “Keith (marine engineer Keith Mayer) yelled ‘Something big down there’s messing it up,’ and when we saw the head, it was huge compared to the first one. We were all kind of in shock. It was once in a lifetime.”

The survey crew estimated the second shark, a mature male, stretched from 12 to 13 feet long.

Begun in 1973, the VIMS Shark Survey is one of the longest-running studies of shark populations in the world. It brought global attention to declines in shark populations due to overfishing, and led to the first U.S. management plan for sharks, in 1993. As regulations help shark populations rebound in U.S. waters, data from the survey and other components of VIMS' Shark Monitoring and Assessment Program continue to inform stock assessments and fishery management plans at federal and state levels.

Professor Rob Latour, who directs the Shark Monitoring and Assessment Program at VIMS, said the back-to-back capture of a white-shark pair is unusual, but not a sign of any direct risk to ocean enthusiasts.

“It’s a rare occurrence, but not really any more meaningful than seeing two pink cars going down the road,” Latour said. “Unfortunately, observing a rarely seen shark often comes with a negative or fearful connotation, but the risk hasn’t really increased. The animals have always been there, and taking a few commonsense precautions minimizes a risk that’s already very low.”

Cassidy Peterson, a VIMS graduate student who has been working on the Shark Survey for the last five years, advised, “Don’t wear shiny jewelry, don’t go swimming near a pier where people are casting with bait or chumming, and don’t swim during dusk or dawn because that’s when shark feeding is most active. Just be mindful, and you’re likely to be safe.”

The VIMS Shark Survey encompasses a single 5 to 7-day cruise each month from June to September, during which the researchers fish a 100-hook longline at eight stations off the Virginia coast from just north to just south of the Chesapeake Bay mouth. Each caught shark is measured, tagged, sampled for DNA, then released. Last week’s cruise was the first of the 2018 season.

Where the researchers encountered the 12-foot great white, at a station about four miles offshore from Sandbridge, Virginia, they also recorded sharks on 41 of their 100 longline hooks. And across all eight stations, their average was 30 sharks per 100 hooks. These values are much higher than the 10 to 15 sharks per 100 hooks typically recorded by survey scientists over the long term.

The sharks they observed were also atypical of June. 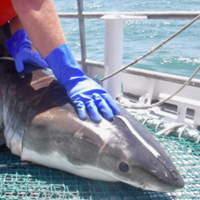 “We saw a lot of big sandbar sharks, a lot of dusky sharks, and a lot of spinner sharks,” Peterson said.

A more typical assemblage for this time of year would feature smaller sandbar sharks, Atlantic sharpnose sharks and dusky sharks.

Latour and Cassidy suggested these observations are likely related to the relatively cool spring experienced in the mid-Atlantic region.

The temperatures were thus more similar to those typically found in May, when winter’s cooler, more nutrient-rich waters still bathe the mid-Atlantic shelf. These rich waters attract the plankton and forage fish that ultimately support apex predators such as great whites. The cooler conditions also explain the presence of the large sandbar sharks.

“The size composition changes as the season and summer progresses,” said Latour. “In the early part of the year, we typically see bigger sandbars, because they’re the older, mature moms that are getting ready to pup in the Bay and coastal Virginia waters. The smaller juveniles appear later.”

Great whites also prefer these cooler waters, both because their favorite prey are cold-water seals, and because, unlike many other sharks, they can control their body temperature.

“Elevating their body temperature above the surrounding seawater gives them a competitive advantage in terms of preying on other species,” said Peterson.