The 2017-2018 academic year marks the 50th anniversary of the first African-American residential students admitted to William & Mary. In 1967, Lynn Briley, Janet Brown Strafer and Karen Ely arrived at William & Mary. The university honors them and William & Mary’s entire African-American community, past and present, this year through “Building on the Legacy,” a series of special events, guest speakers and performances. All events are free and open to the public, unless otherwise noted.

The commemoration’s theme is Sankofa, which, in the Akan Language of West Africa, reflects the idea that “it is not taboo to go back and fetch what you forgot.” The philosophy is famously represented by the Adinkra symbol of a bird with its head turned backward, taking an egg from its back. "Building on the Legacy" calls back to the Sankofa teaching that the past must be known and understood in order to move forward and make the most of the future. – Ed. 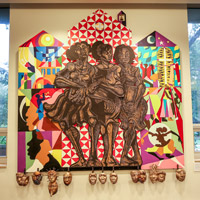 The work of African-American artist and educator Steve Prince is the focus of a special exhibition, “Communal Resurrection,” in Andrews Hall running the month of March. Prince has visited William & Mary before, teaching middle-school students and working with a summer class to develop a mural that launched the yearlong commemoration. He will also participate in the Lemon Project Symposium (below). A reception, Leah Glenn Dance Theatre performance and gallery talk for “Communal Resurrection” will be held on March 15 at 4:30 p.m. in Andrews Hall, partially funded by the W&M Arts & Sciences Annual Fund.

Some of the first African-American alumnae and faculty will return to William & Mary at 6 p.m. on March 15 for “Learning from the Past to Shape the Future,” a panel discussion hosted by the School of Education’s Higher Education Program that will explore the experiences of these trailblazers as well equity and inclusion in higher education. Moderated by Assistant Professor Stephanie Blackmon, the panel will be held at the School of Education’s Holly Room. It will include two of the three African-American students first in residence at William & Mary — Lynn Briley ’71 and Janet Brown Strafer ’71, M.Ed. ’77 — who both went on to be educators. Joining them are James M. Patton, professor emeritus, and Brenda Williams, professor emeritus. 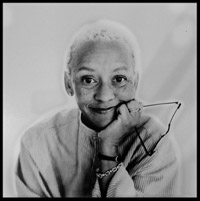 The Lemon Project and the 50th commemoration committee have joined forces for this year’s spring symposium, scheduled March 16-17 and themed “Desegregating Higher Education in Virginia: William & Mary in Historical Context.” The March 16 events will be held in the Commonwealth Auditorium, while the March 17 events are scheduled at the School of Education. Poet Nikki Giovanni is the keynote speaker, scheduled for 9:30 a.m. on March 17. The two-day event features presentations, panels and performances, plus a hands-on workshop with artist Steve Prince, who with W&M students created the mural “Lemonade: A Picture of America” to launch the 50th commemoration: 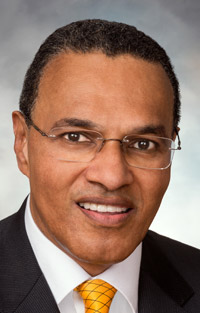 The final talk in the School of Education’s Diversity Lecture Series will feature Freeman A. Hrabowski, president of the University of Maryland, Baltimore County, at 6 p.m. on March 21 in the school’s Matoaka Woods Room. Hrabowski was named by former U.S. President Barack Obama to chair the President’s Advisory Commission on Educational Excellence for African-Americans. He was named one of the 100 most influential people in the world by Time Magazine in 2012 and one of America’s best leaders by U.S. News & World Report in 2008. Hrabowski’s most recent book, Holding Fast to Dreams: Empowering Youth from the Civil Rights Crusade to STEM Achievement, describes the events and experiences that played a central role in his development as an educator and leader. The lecture series is supported by the late Robert Stanley Hornsby ’41, J.D. ’49 and Lois Saunier Hornsby as well as the W&M Center for Gifted Education. 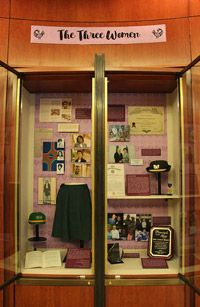 Swem Library will continue to display “Brave Enough to be First: Exploring 50 Years of African-Americans in Residence at William & Mary,” an exhibition of artifacts detailing the university’s history with African-Americans, from slavery to the present day. The exhibition will remain available in the first floor rotunda’s Marshall Gallery through May 13.

On April 19, a special ceremony will be held as two plaques are dedicated at the Wren Building. One plaque recognizes the 50th anniversary of the first African-American students in residence, the other recognizes the 100th anniversary in 2018 of the first women students at William & Mary. The university will commemorate that milestone during the 2018-2019 school year.

The W&M Choir will publicly premiere composer Jeraldine Herbison’s “Messages to the Human Heart” at Commencement on May 12. The work was commissioned to honor the 50th anniversary of the first residential African-American students at William & Mary.