A fish helped Khalil Russell ’21 determine that William & Mary was a better place for him to attend college than Harvard and Yale.

Already a strong candidate for a 1693 Scholarship, Russell was visiting campus last spring when one of the previous scholars took him on a tour of the woods near the university.

“I fell in love with it instantly,” he said. “During that hike I saw one bald eagle, three deer and a fish – I’m obsessed with fish. If nothing else, that spoke to me, stuck with me. I’m definitely a nature kind of person. I don’t like the city that much, so that definitely pushed me toward William & Mary. There’s rarely a window I look out here that I can’t see trees. And that makes it feel like home.”

Russell has incorporated one other creature comfort at the Murray House on Chandler Court, headquarters for the 1693 Scholars, to make it feel more like his home in Hampton, Virginia.

It’s a 55-gallon fish tank. That’s in addition to the two smaller tanks he maintains in his dormitory.

“The fish tank was a huge part of me,” Russell said. “Imagine just going to college and having a really small tank in my dorm. Having fish is a really big part of me because it’s a place to sit and watch and relax, a place to learn.” 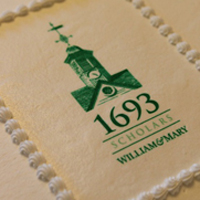 Russell was one of eight incoming freshmen chosen for a 1693 Scholarship – all 14,914 applicants for admission were considered. A student must have pursued the most demanding curriculum available to him or her, ranked in the top 1 percent of his or her graduating class, and scored above 1,500 combined on the math and critical reading portions of the SAT and/or scored above a 33 on the ACT. Additionally, 1693 Scholar students have been successful leaders in their school and local communities.

Russell was president of his senior class, received a Governor’s School honors research mentorship, was Drum Major for the Hampton High School marching band, was a member of the National Honor Society, the Math Honor Society and the Tri-M Music Honor Society, just to name a few. 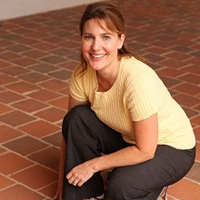 “From an admission counselor’s perspective, Khalil’s application had it all,” said 1693 Associate Director Kimberly Van Deusen. “His essays were well written, personal, and allowed the reader to experience his world in a very honest and sincere way. His application radiated personality and curiosity. After reading his application I remember thinking, ‘I hope I get the chance to meet this young man.’”

As an in-state student, Russell will receive a full scholarship and a $5,000 research stipend he can use once he comes up with a project that is approved by 1693 Director Dan Cristol. He also gets access to the Murray House, which he called “very, very useful,” especially when a 55-gallon fish tank is in play.

“Khalil's interest in fish was a factor in his being awarded the 1693 Scholarship in the sense that we are looking for students who are extremely passionate about something, and who can both excel at it and explain why it excites them and should excite us,” Cristol said. “But if it hadn't been fish I believe he would have been just as passionate about something else, and we would have liked that, too.”

Although he isn’t sure in which direction he will take his 1693 research project, during his visit to campus last spring Russell impressed the selection panel by putting forth the idea to study why fish sometimes altruistically raise the offspring of other fish, sometimes to their detriment.

“This is a sophisticated idea for a high school student to be thinking about,” Cristol said, “but, again, if it wasn't fish, I am pretty sure Khalil would have impressed us with something else.

“William & Mary is a great place for him, with (William & Mary’s Virginia Institute of Marine Science) nearby and several biology department faculty working on questions he's interested in. As a 1693 Scholar he'll be poised to take advantage of undergraduate research from the start and able to fund his own research for awhile.” 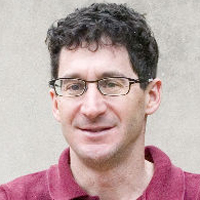 Russell described his interest in fish as a “complete accident.” One night seven years ago, his father brought home swordtails and bronze cories. Russell put them in a tank, went to bed and when he awoke the next morning, he found fry swimming around the tank.

After researching what to do, he placed the babies in a smaller tank, raised them, then set them back in the larger tank. That got the ball rolling.

“It more or less spiraled out of control from there,” he said.

At one point, the owner of a pet shop in Hampton told Russell that he’d give him a pair of fish — Kribenesis Cichlids, for you purists — that he could breed and return the babies as payment for the original couple.

“I didn’t have to pay a dime,” he said. “They made me fall in love with fish breeding because it was the most interesting behavior I’d ever seen.”

Kribenesis Cichlids “brood care,” Russell said. “They take care of their babies, herd them around the fish tank, take them into little caves at night and bring them out in the morning. They are very protective.” 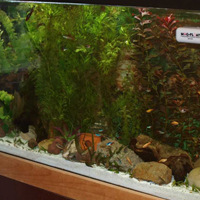 That’s in stark contrast to the Cockatoo Dwarf Cichlids (or Apistos for short) he has raised.

“Most of the siglets I breed would be single male and single female, and they would defend their offspring,” he said. “With the Apistos, they form harems. It’ll be one male, two or three females. He’ll breed with all of them and he’ll kind of maintain the territory, but each female is in charge of each individual brood. And they protect the brood, even from the father, which is something I’d never seen before.”

“It gives me responsibility. It makes sure that, if nothing else, I can’t just stop working. You don’t want to fail a class, but if you do, nothing dies. With fish, if you stop taking care of them, they start dying. Life is valuable. Keeping fish keeps me focused, keeps me working, keeps me interested, keeps me entertained and keeps me from getting stressed.”