Camber in a road is tremendously useful — unless you happen to be running, not driving, on that street.

Another name for an arched surface, camber helps siphon off water and enables automobiles to gain better traction. But when a person runs on that same road, their foot lands a little sideways, increasing the runner’s chances of injury.

What kinds of injuries?

Under the direction of Associate Professor of Kinesiology and Health Sciences Ray McCoy, that’s what William & Mary student Erin Heald ’18 is researching. She plans to have the data she collected analyzed by the end of the semester and in time for her to write an honor’s thesis.

{{youtube:medium:center|LK7S2LtRZaM, The impact of running on a cambered surface}}

Last semester, Heald recruited 12 female students who run between five and 20 miles per week — “the recreational running population,” Heald called them — to take part in her experiment.

Women are an under-represented population in terms of running research. From what Heald could find, previous studies focused on elite male runners, those who ran far greater than 20 miles per week.

This, she said, “is our contribution to the field.

The runners were placed on a treadmill, where they began running on a recreated flat surface. The treadmill then was lifted on either the left side or the right side using two wooden blocks to simulate running on a down slope or an up slope similar to what would be encountered on a cambered street. One of the four trials was run barefoot; the other three with new shoes Heald purchased with money from the Kinesiology and Health Sciences department, all the same make and model. Each trial lasted no more than two minutes, at 7.5 miles per hour. 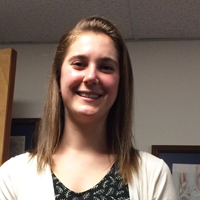 The runners were filmed, full-body, head-to-toe, from the side and the rear so that Heald could view different angles of impact from both directions. Markers were placed on the neck, hip, knee and ankle so that Heald and team could look at the whole chain, including pelvic tilt at the hip.

All of the subjects were healthy; none wore orthotics in their personal shoes as a corrective measure.

McCoy cut out part of the shoe back and had subjects run without socks so the team could use a sharpie to draw two little dots on their heel. In turn, that would allow them to draw a line on a computer program that would show if the runner’s foot was tilting from side to side, known as pronation.

Heald said she was looking to find “if there’s a connection between the cross-sloped running pattern that could create more of an injury risk,” she said. “There’s no way for us to directly say, ‘Running on cross slopes causes plantar fasciitis.' We could say, ‘This pronation angle increases when you’re running in a cross slope, and that can put more stress on ligaments and joints that over time could wear down and cause tendinitis or other injuries.’” 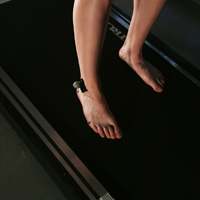 Heald was tabbed by McCoy for the project, in part because she is a runner — though recovering from a soccer-induced knee injury. But she also has worked as a salesperson in an athletic shoe store and has a keen interest in shoe design.

“I want to make running accessible to other people because I love running and I want people to know the risks of running,” she said. “If they go out on a particularly slanted road they might run toward the crown of it more than on the edge, so that they can continue running.”

Asked why running can produce such injurious side effects, McCoy said it’s all about our anatomy.

“We have a lot of body that stands high over a small base,” he said. “I’m really amazed how we can balance on such a small foot. But it does give us a challenge … especially on the red bricks of the sidewalks in this area. We see a lot of changes to the foot structure and movement when we’re working on uneven surfaces.”