Katie McCormack is exactly the type of William & Mary freshman Robert and Jane Sharpe had in mind in 2001 when they made the funds available for the community scholars program that carries their name.

McCormack was raised in Bristol, Virginia, near the Appalachian Mountains. She spent a lot of time on the trails there, intuitively aware that her experiences exerted a calming effect on her. She had heard the term “eco-therapy,” but didn’t know much about it and was eager to learn.

{{youtube:medium:center|RpzfzzVOK2g, Katie McCormack and the value of eco-therapy}}

Likewise, she had not done much community service work in high school, but was eager to do more. She thought the Sharpe Community Scholars Program might be the way to meet her needs.

W&M’s Sharpe Community Scholars Program offers first-year students the chance to combine research and academic study with community engagement. For the fall semester, students selected for the program enroll in a seminar, a small, discussion-based class that explores academic approaches to social issues.

In the spring, students propose independent research projects that they can continue through the university’s community studies minor, or with advising support from other departments. 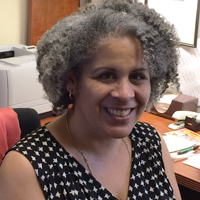 “We spend the beginning of semester wrapping their minds around the idea of community-based research in classroom learning and within communities,” said Monica Griffin, director of engaged scholarship and the Sharpe Community Scholars Program. “One of the things we really emphasize is that communities are not laboratories. People are not subjects in labs; therefore, doing any research involves relationships.

“We spend time getting a sense of what that means before thinking about a topic that doesn’t dehumanize or turn a community into a lab issue. Instead, they investigate the complexity of social problems and the resources and politics that are involved.”

During the first semester, McCormack observed and interacted with her fellow students – including other Sharpe Scholars, all of whom are housed in Spotswood Hall in what is called a “living-learning experience,” something McCormack said she appreciated. She gauged the pressure many of her peers exerted on themselves in striving for academic excellence, took in the natural, wooded environment in which the campus sits, and had her project.

“For me that was eco-therapy,” she said. “You want to do something that will benefit the community. William & Mary students have shown to have a stress issue, but we also have acres and acres of beautiful woods, so it’s a perfect area to explore something like eco-therapy.”

Working with fellow students Han Qiao, Jordan Gregg and Shelsy Delgado, McCormack researched the history of eco-therapy – known in Japan, where it has been practiced for centuries, as Shinrin Yoku and focuses primarily on walking through the country’s dense forests.

She also conducted a survey with students, asking about stress on campus and how eco-therapy might impact it. However, she is wrestling with the validity of the results, as only 66 students responded. She’d be more comfortable with a larger sample size.

Nonetheless, her work as a Sharpe Scholar has given her a baseline from which to proceed with what she ultimately hopes will be an eco-therapy-based plan to present to the university.

“I would like to do further [study] to find a causative link between reduced stress and eco-therapy,” she said. “After that, I’d like to implement something that would help students on campus, like an outdoor study space.”

[The university administers the National College Health Assessment survey every three years, regarded as the best benchmark for assessing college health needs nationally. The results of this year's survey show that W&M students' level of stress is a little below the national average.]

McCormack, who hopes to become a doctor, said that she has learned that there are many options for students – anyone, really – to reduce stress in and around Williamsburg. The William & Mary Parks Research Lab, which conducts interdisciplinary, use-inspired research and develops community parks and public space projects including the Greater Williamsburg Area Park Prescription program (GWA Park Rx) and the W&M Greenspaces Map project, has compiled a database of the parks in the region.

And while she prefers the dock behind Keck Lab, McCormack said that she has come to learn just sitting in the Sunken Garden, or anywhere outside, or walking for a few minutes, can help relieve stress.

“One major theory today is ‘Attention Restoration,’ which states that in society today, you really have to focus on everything and be aware of what’s going on,” she said. “But when you go out into nature, you don’t focus on every little detail and this allows your mind to refresh.”

Griffin would say that McCormack’s project, focused as it will be on the W&M community, is just the right size. Many students, she said, have to learn “scope,” or what she calls “the first harsh lesson.”

“Changing the world is popular, current and it’s certainly something Sharpe Scholars come in wanting to do – and some of them are already starting to do,” she said. “We have Sharpe Scholars who have started non-profits before they got here ... They come in with really big questions about, for example, ‘What causes poverty?’ or ‘Why does racism continue?’ or ‘When will women get paid the same?’ Or ‘What is equity?’

“That’s way too big a scope for them to engage the question as a whole. So we spend a lot of the second semester sharpening their focus, narrowing it down, and helping them find something that’s feasible for the semester. In that stage I try to give them a range of options, from continuing with service learning all the way to participatory community-based research should they choose.”

Griffin said there are any number of outcomes for a Sharpe Community Scholar. Some, such as the students who built a community garden in the Grove section of James City County, prefer to have a sense of mastery at the end of the semester. Others prefer to continue interacting with organizations already addressing a community’s needs and seeing what more can be done.

“And I had a student who wrote a draft of a paper and included the note to me that, ‘I’ve never been more excited about doing research,’” Griffin said. “It’s really telling that some students get satisfaction over pursuing their questions over a period of time and have the intellectual patience to do so.”