The following story was originally published in the winter 2016 issue of the W&M Alumni Magazine - Ed.

Five years ago, when William & Mary geology professor Chuck Bailey ’89 started research in a new study area in the Piedmont region of Virginia, he thought it would be fun to organize a departmental canoe field trip to see the terrain.

“It was this gorgeous, early-fall day,” Bailey said, “and looking out at this flotilla of boats on the river, to me it was one of those moments as an educator and researcher where you think, ‘I get to do this for a living.’ We’re not just out in the river playing. We’re learning about the earth and the environment.” 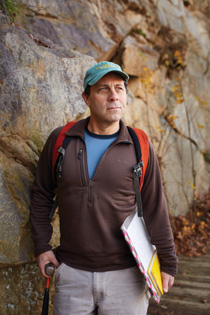 Bailey is a structural geologist, interested in understanding the architecture of the earth: how it’s put together, what the structure actually looks like, and what happened to make it that way. He is particularly interested in understanding how fault zones work and how mountain belts are raised up. His research has taken him all over the world, from the deserts of southern Arizona to Oman.

But as a kid growing up in Ivy, Virginia, Bailey wanted to be a golf course architect. “I think that came out of an unstated interest in the landscape,” says Bailey. “And I played golf and thought I could certainly design better golf courses than those I got to play on. But then I went off to college and I didn’t think much more about what one would do to become a golf course architect.”

Bailey was raised by a single mother and finances mattered when it came time to pick a college. Not only was William & Mary a state-supported school, but it had great academics and provided Bailey the opportunity to run cross country.

“When I arrived here, I didn’t know I was going to be a geology major. I serendipitously took a geology class my first semester and that set the course.”

After graduating, Bailey went right on to Johns Hopkins University to pursue his Ph.D. in structural geology and then took a faculty position at Denison University in Ohio. Bailey joined the William & Mary faculty in 1996, becoming chair of the Geology Department in 2011. “I’m proud that there are many young first-class scientists out there who first worked with me when they were W&M students. Our department is launching the next generation of earth scientists. That’s why I came here. I wanted to have that kind of impact.”

Bailey believes that his work and the work of his students in structural geology is important for a variety of other disciplines. If scientists want to understand why ground water flows the way it does, often times understanding the earth’s structure is important. In the energy industry, locating natural resources also often comes down to being familiar with the structure of the earth.

While most people don’t come to William & Mary to study the earth sciences, Bailey constantly sees students who take a geology class and genuinely enjoy it. “And that’s a cool thing to witness,” he says. “As an instructor, what I do can make them realize that this is something they can see themselves doing as a career.”

Bailey notes that William & Mary’s geology department now graduates as many students as places like Virginia Tech, which he says has a lot to do with the faculty. “The reason we have a great geology department is because we have faculty who know their students and are not only concerned about their well-being, but are interested in challenging them. Any way you look at it, we are doing right by William & Mary and we are doing right by our students.”

In January, the geology department, in conjunction with the Reves Center and the music department, launched an interdisciplinary study-abroad program in Oman. According to Bailey, the landscape and geology in Oman is iconic and, in many ways, like no other place on earth. “Also, problems that a lot more of our world will be facing in the 21st century, the Omanis are already dealing with because of the nature of their environment. Why wouldn’t we take students to a place like this? It’s a safe, modern country, and we can touch on a lot of things.”

Fifteen students and two faculty traveled to Oman in January and spent two and a half weeks in a vastly different environment, learning about a very different culture, music and of course, geology. The program is just another example of how the department is providing bold opportunities for its students.

“If William & Mary really wants to be bold, then look right here at our geology department because we have a lot of tangible examples,” Bailey says. “We float down rivers, we climb mountains, we study how planet Earth operates. We are bold. We do a lot of cool things.”