2015 was a good year for William & Mary Sociology Associate Professor Gul Ozyegin, who had the distinction of publishing two books over the summer – both dealing with sex, love and gender in the Muslim world.

In August, NYU Press published the book Ozyegin had worked on for more than a decade, New Desires, New Selves: Sex, Love and Piety Among Turkish Youth.

But while that book was in production, Ozyegin had the opportunity to edit a new volume, Gender and Sexuality in Muslim Cultures, published in July by Ashgate.

“It’s pure coincidence,” said Ozyegin, who teaches in Sociology and the Gender, Sexuality and Women’s Studies program and is affiliated with the Asian and Middle Eastern Studies program. “I couldn’t resist; I took on the challenge [of the new book]. It was kind of an urgent project for me because it was informed significantly by my teaching.”

Over the course of four years, between 2002 and 2006, Ozyegin interviewed 87 young Turkish students attending Istanbul’s prestigious Boğaziçi University about their experiences and views on relationships, sex, love and gender.

“When you study young people – sex and love, intimacy and desire – these are very important issues for self-construction, the self-making,” Ozyegin said. “That’s why I consider the realm of love and sex as an important site for understanding self-making, gender and sexuality. Through those experiences and narratives, I explore how young Turks reconfigure gender and sexuality.”

In Ozyegin’s book, the students’ explorations are tightly bound to the conditions in Turkey over the course of their lifetimes and to their hopes for the future. They experience tension between the neoliberal globalization that has characterized their youth and the current Islamization of public, political and private life.

“On the one hand, there is the desire to surrender to the seduction of sexual modernity, to renounce the normative model of selfless femininity and protective masculinity, and to reject power and authority located external to the individual,” Ozyegin writes. “On the other hand, there is the longing to remain loyal and organically connected to social relations, identities and histories that underwrite the construction of identity through connectivity.” 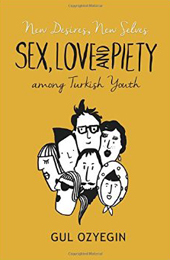 She had originally hoped to include two more groups: lesbians and pious males. But the majority of her taped interviews with lesbian students were destroyed in travel, while “pious men” refused to speak with her about sex and love, even though she enlisted respected Islamic scholars whom the students admired to intercede.

“Part of the reason was that I was inviting them to talk about gender and sexuality,” she said. “Mixing of sexes is an issue in Islam. I’m a stranger, and I tried to engage them to talk about intimate issues … I couldn’t get any interviews with them.”

She noted that she isn’t the only scholar trying, and failing, to study pious Muslim men in Turkey. As they continue to gain political power under Turkish President Recep Tayyip Erdogan, scholars have become increasingly concerned that pious men are effectually inscrutable.

“There’s a huge empowered Muslim upper-middle class,” she said. “They are invisible in the sense that there is nothing about their look – they don’t have beards, they don’t have Islamic outfits or anything else that would identify them as Muslim. Muslim women who are feminists, they have been complaining that [Muslim men] are not subject to scrutiny because they can easily pass. They don’t have to carry their religiosity.”

But what the book lacks from young pious men, it makes up for in the intimate stories and thoughts of the other young adults with whom Ozyegin spoke.

"Through sensitive interviews and rich storytelling, Gul Ozyegin shows that we cannot understand young peoples’ intimate lives in universal ways – either as conforming to traditionally religious sex/gender scripts, or as morphing into modern global neoliberal selves,” wrote Michael A. Messner, University of Southern California sociology professor, who reviewed the book. “Instead, Ozyegin paints a picture of young Turkish people today grappling with ‘fractured desire’ in a rapidly changing and contradictory social context.”

“This is not market research; you are not asking what type of soap or detergent they use,” she said. “So there’s this special connection between researcher and the researched. They might say something and I might, not in a fake manner, I would say, ‘Oh, when I was growing up, we were calling those ‘one-night stands.’ So I would engage with them. It was mostly like conversation in that sense. People do not respond if they feel like they are being questioned in a one-sided way. I wasn’t faking it.”

Gender and Sexuality in Muslim Cultures

Ozyegin took on the second project, editing Gender and Sexuality in Muslim Cultures, believing classes suffered from the lack of quality texts.

“I was always looking for good teaching materials on Muslim identities and cultures,” she said. “What you usually find is either good theoretical work, but with heavy jargon, or some very simplistic, essentialist, Orientalist treatments.” 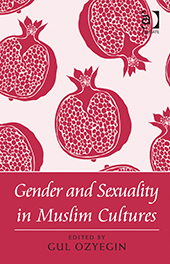 In the project she saw an opportunity to mix theory with empirically rich ethnographies and new studies on global and local Muslim identities and how they’ve been transformed. She also saw a chance to pay critical attention to masculinity in Muslim-majority countries, an area that’s been largely neglected, she said.

Ozyegin also organized the book by theme, rather than by country. Most textbooks, she said, devote one chapter per Muslim-majority country – Yemen, Pakistan, Morocco, etc. – and focus on a unique aspect of that country. But the effect, she said, reinforces stereotypes rather than countering them.

“If you teach only one article on Pakistan and it happens to deal with honor killings, students leave your class closely associating honor killings with Pakistan,” she said. “Whenever they think of Pakistan, that’s the mark: honor killings.”

By organizing the book around broad themes, Ozyegin invited multi-disciplinary, scholarly works that cut across the Muslim world. So the section devoted to “challenged masculinities” includes an essay from Pakistan, another from Egypt, plus three works from present-day Turkey and one from an Ottoman perspective.

“Students would then understand that we are talking about multiplicities of identities and subjectivities, complicated questions about social transformations,” she said. “With these examples, they can imagine that there might be others.”

Ozyegin is not the sole William & Mary voice in the volume. Included is an interview on female genital cutting in Egypt and Kurdistan conducted by undergraduate Faith Barton ’14, who spoke with anthropologist Maria Frederika Malmstrom and Goran A. Sabir Zangana, founder of Doctors against Female Genital Mutilation.

Victoria Castillo, visiting assistant professor of gender, sexuality and women’s studies at W&M, wrote the interview’s introduction from a pedagogical perspective, discussing when and how she teaches students about female genital cutting.

Ozyegin’s volume has been well-received by scholars who recognized its value to students.

“This is a welcome collection on sexualities and gender ideologies in Muslim-majority contexts by established and emerging scholars,” wrote reviewer Frances S. Hasso, associate women’s studies professor at Duke University. “It fills a scholarly gap on body-focused regulations, intimacies, masculinities and queerness … This is a fresh and teachable text.”

Hasso’s review is high praise for Ozyegin, who set out to keep students at the heart of Gender and Sexuality in Muslim Cultures.

“Our students, when they learn these things, they get excited,” she said. “They are learning something so that they can go out and when they encounter these stereotypical images, they can say, ‘Do you know that in Islamic cultures …’ They feel they are empowered, equipped intellectually to be able to engage with others.”