Bettina Judd knows how to be patient. The visiting assistant professor of Gender, Sexuality and Women’s Studies at William & Mary said she was patient when she waited for medical care and was patient, to a point, with the hospital staff withholding it. Then she was literally a patient. Later she wrote patiently, waiting to sort out the ghosts that haunted her experience as a young, black woman undergoing “an ordeal with medicine.”

So it was only fitting that she played on every sense of the word when she titled her first book of poems, published in November by Black Lawrence Press, “Patient.”

The project began as Judd healed from surgery that removed her ovary after a torsion. As Judd tried to process through poetry the experience and the negative aspects of treatment she received, the voices of the forgotten women she learned about through scholarship insistently broke through, she said. No matter how hard she tried, she could not decouple the past from her present experience.

So Judd worked the voices into the poetry, letting the “ghost” women speak and in doing so, elucidating a historical link between women’s medicine, showmanship and racist treatment of black, female patients.

In “Patient.” the reader encounters the dubious legacy of J. Marion Sims, credited as “the father of gynecology” for fashioning the first speculum, from a pewter spoon, in the 1840s. 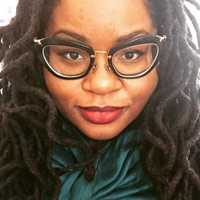 Usually not credited are the three enslaved women – Anarcha Westcott, Lucy Zimmerman and Betsey Harris – on whom Sims experimented for years in a makeshift operating room in his backyard. He performed dozens of surgeries on them without anesthesia while medical students observed.

They become Judd’s ghostly companions in her poems, and are joined by Joice Heth, a black woman exhibited as a sideshow freak by P.T. Barnum, billed as the 161-year-old enslaved nurse who had raised George Washington.

In Judd’s poems, Heth’s voice becomes ironic, mimicking the over-the-top language of the showman’s trade. She was the easiest character to write, Judd said, because her barbed wit paralleled the personalities of real-life women Judd has known.

“Ghosts might not be real, but I know this woman from another place,” Judd said. “I know this hilarious old woman who tells you about yourself, and you don’t realize until two weeks later that you just got made fun of and told off.”

Also in “Patient.” is Saartjie Baartman, also known as Sara Baartman, a South African woman billed as the “Hottentot Venus” and exhibited in 19th-century Europe for her large buttocks. Judd also references Henrietta Lacks, a black woman whose cells were cultured in the 1950s without her knowledge, and Esmin Green, a New York woman who died on the floor of a hospital waiting room in 2008 after waiting for more than 24 hours to be treated.

Judd adopts a persona in the book – the Researcher – which serves to distance herself in the 55 poems and signals the reader that she’ll be asking questions; not posturing to answer them. The device also nods to the scholars on whom Judd depended for historical and interpretative information. Judd further blurs the line between art and scholarship by including credits and endnotes.

Judd said poetry gave her room to imagine the women’s lives, to make them real for the reader in a way that a more scholarly treatment wouldn’t have allowed.

Judd’s imagination tries to humanize the historical record, but her characters evade, buck and mock her efforts, adding another layer of complexity to “Patient.”

“They are telling their stories through this researcher’s voice and also being really clear about how problematic that is, to assume you are speaking for dead people and people who were never supposed to be recovered,” she said. “It’s an internal dilemma of the researcher as she goes on. Who can she do that to? Why is she the person to do that? And if she doesn’t, who will?”

One example is Judd’s treatment of Baartman, who has been studied exhaustively. Judd turns that on its head in the short poem, “The Researcher Contemplates Venus,” in which Baartman herself is exhausted by it:

“When I talk about my work I am asked to speak of Saartjie Baartman. / I take Saartjie’s hand and ask her: Where would you like for me to put you? She laughs, or maybe she sighs. Researchers only ask leading questions. Questions that lean toward the body sometimes trip over the dead.”

The poem “was trying to address the great responsibility to tell all of the stories, to connect all the dots, to uncover all of what has been made rendered invisible by history,” Judd said. “But what I’m also interested in in this project is letting her and all of these women rest a little bit.”

One reviewer admitted in an otherwise positive review that it took three starts before she got through the book, which she called “an uncomfortable jaunt into America’s crippling disregard of black bodies.”

But the reviews have been positive, and even before it was published, the book had been awarded the Hudson Prize for poetry.

And as Judd performed the new poems to audiences, women – usually women of color – approached her afterward, divulging their own harrowing stories.

“It became a project about this audience of folks who thought they were alone in their stories, who felt ashamed in their stories with medicine,” she said. “All of those little things, the shameful part … That’s in the legacy of what becomes pelvic exams, what becomes gynecology.”

She also met medical practitioners who had asked themselves what gynecology would look like if it had moral roots and a history of conscience devoid of racism and enslavement. They were working to make women’s healthcare less uncomfortable and humiliating.

To her, the two projects are related, as she regards the creative production of black women as valuable feminist work. Scholarship soberly discusses how discrimination undermines people, limits their potential and threatens their lives, she said. But art conveys the lived experience and offers ways of coping that aren’t presented in popular culture or academia.

In fact, because the conclusions of popular culture and academia are so depressing, art based in emotion is indispensable in suggesting healthy ways of confronting reality, she said. She is currently working to convert the dissertation into a book.

“I’m using this homegrown idea of affect of feeling as a productive thing. It’s not a throwaway; it’s not irrational,” she said. “There’s work that can be done that is based in our feelings, that is equally valuable and equally productive, but that still pushes back.”