William & Mary has retained ties to its royal heritage since namesakes King William III and Queen Mary II granted the royal charter establishing the university on Feb. 8, 1693. In the intervening 322 years, William & Mary has hosted members of the British Royal Family as well as sent delegations to London. 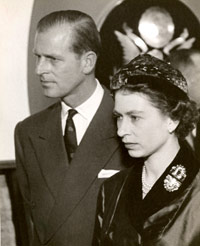 In November 1954, the university received its first British royal visitor, Elizabeth the Queen Mother, when she visited Williamsburg as part of a 25-day tour of the United States. She stayed for three days, a guest of John D. Rockefeller Jr. and Winthrop Rockefeller, and apparently enjoyed a quintessential Williamsburg experience, as the Schenectady Gazette reported she was served both peanut soup and Virginia ham the night of her arrival.

Three years later, in 1957, Queen Elizabeth II and Prince Philip, Duke of Edinburgh, visited the Historic Triangle as part of the 350th anniversary of the landing at Jamestown. They were the first reigning monarchs to visit William & Mary. Elizabeth was here less than an hour, according to Earl Gregg Swem Library’s account, but in that short time she had tea at the President’s House, spoke from the balcony of the Sir Christopher Wren Building to a crowd of roughly 20,000 people – believed to be the largest crowd ever seen in the city – and accepted gifts from the university.

Twenty-four years later, in 1981, Charles, Prince of Wales, came to campus for the first time as part of a celebration commemorating the 200th anniversary of the Battle of Yorktown.

“I felt that in my capacity as colonel of the Welsh Guard you would like to have a genuine Redcoat in your midst,” he joked in a speech delivered at William & Mary. While here, he also gave Swem its millionth volume, “Windsor Castle: Picturesque and Descriptive,” and accepted William & Mary’s first honorary fellowship.

The food of the Royal Family must have been a preoccupation with reporters, because a Chicago Tribune writer reported that the prince ate a “light lunch” that included crab, beef tenderloin and asparagus. The prince was scheduled to travel to the White House the next day, where the reporter noted he “had to face more crab and asparagus,” as well as a dessert made of red, white and blue sherbets with a brown sugar royal insignia, apparently concocted for his visit and dubbed the “Crown of Sorbet Prince of Wales.” 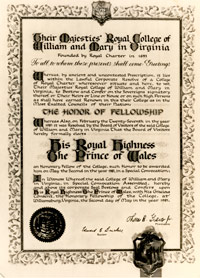 In 1988, William & Mary returned the favor, sending a special delegation to Britain for the 300th anniversary of the ascension of King William III and Queen Mary II. Wilford Kale, author of Hark Upon the Gale: An Illustrated History of the College of William & Mary in Virginia, noted that Congress selected William & Mary to represent the United States through a joint resolution. Led by former W&M President Paul R. Verkuil, the delegation included former Rector Hays T. Watkins and former Chancellor Warren E. Burger.

Five years later, Prince Charles returned for the 300th anniversary of William & Mary, speaking to roughly 12,000 people at the 1993 Charter Day ceremony. He cautioned against de-emphasizing liberal arts in a quest for technological advancement, saying, “There is a real problem in the poverty of many people's ability to express themselves, which causes not only practical difficulty but often leads to an aridness of spirit and a deep sense of frustration.” 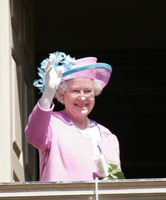 Most recently, Queen Elizabeth II returned in 2007, 50 years after her first visit, for the 400th anniversary of the founding of Jamestown. She became an honorary member of the Class of 2007, greeted more than 7,000 people from the balcony of the Sir Christopher Wren Building and rang its bell. She did not speak publicly at William & Mary that day, though she did comment on the age difference between her and the rest of the Class of 2007 to the senior class president, according to the Flat Hat.