Jalbert is a photography professor at the Savannah College of Art & Design whose work emphasizes landscape and language. He will give a lecture at noon on Monday, followed by an opening reception at 4 p.m. The exhibition will run through April 3 in the gallery within Andrews Hall, behind Phi Beta Kappa. The exhibition and lecture are free.

“I am excited about Josh Jalbert’s exhibition and lecture,” said Eliot Dudik, visiting assistant professor of photography and Andrews Gallery coordinator. “He has come up with some very interesting and unique process and exhibition techniques. I can’t wait for this one.”

Jalbert’s work diverges from what an image simply “looks like” to encompass the relationship between himself as a photographer and how the landscape responds to his presence. 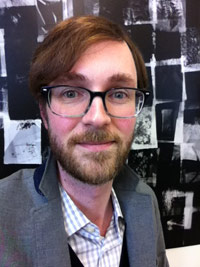 “I try to make work dealing with a phenomenon, rather than an outward appearance,” he said. “I look at things like wind and human breath, the movement of light – on the surface of water especially – and how bugs eat through leaves.”

He is particularly fascinated with the idea of language, calling it one of two principal themes running through his work. Landscape is the other.

“The origin of language comes principally from our involvement in the land and is largely – at least at the origin of writing – pictographic,” he said. “A basic understanding of photography involves ‘writing with light’ or ‘drawing with light,’ as the term photography implies. Many of the principle inventors of photography describe the medium as ‘nature drawing itself’ or ‘writing itself.’ So I continually look at things that refer to linguistic forms in the landscape. That might be things like the movement of light or the hieroglyphic patterns that are made by bugs as they eat through leaves.”

In presenting those linguistic forms, Jalbert also considers photographic processes. “Sunlight on Water,” for example, was shot directly on photo paper rather than film, so he could sidestep the need to make interpretative decisions in the darkroom. The resulting sunlight, in negative, on a white background often resembles “scribble script.”

“Sunlight on water is almost invisible to our eye because it's so blindingly bright, you can't really see it. I think of the camera as a mediator between phenomena that are invisible to our biological senses, translated through the apparatus – the camera – and becoming legible as a ‘script’ so it can be seen. Not read, but nevertheless seen and acknowledged.”

Similar thinking went into “Morse Code.” Jalbert shot photos of the sun over a month, capturing its various moods. “It’s a very reductive, simple form of photography, to think about it as conditioned on, and possible by, sunlight. So I decided just to point the camera at the origin point, the source of what makes all photography possible.”

Morse code, of course, is represented by pulses of electricity or light. Jalbert interpreted how the sun is occasionally obscured by clouds and environmental conditions as “something like Morse code, but in a very long form,” he said.

The exhibition is one part of the Department of Art and Art History’s efforts to create a new photography program at William & Mary.