by Emma Craige '16 Institute for the Theory and Practice of International Relations |  December 19, 2012

In the wake of the 2012 U.S. general election, it is now imperative to understand the intricacies of regional governments in China and India. That was the message of William Antholis, managing director of the Brookings Institution, when he addressed a full auditorium of students and faculty at William & Mary on Nov. 30.

After being introduced by Provost Michael R. Halleran, Antholis discussed the importance of correctly interpreting foreign federalism for the study and practice of international relations, citing current events in two Chinese provinces and two Indian states. 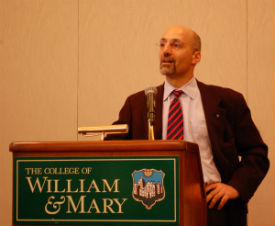 Antholis spent six months conducting field research in the Guangdong and Jiangxi provinces of China where he discovered strikingly different approaches to governance. He also traveled to the Indian states of Gujarat and Bihar in order to obtain first-hand knowledge of how the governors in these rapidly growing states are using their local experience to build nationwide constituencies in opposition to the ruling Congress Party.

"We need to take local leaders seriously and understand their effects on national politics and foreign policy," said Antholis.

Antholis explained that while many Americans think of India and, especially, China as monolithic nations states run by centralized states, the reality is quite different. For example, in the area of climate change, any post-Kyoto environmental regime that is negotiated internationally will need to be accepted and regulations enforced not just by the central government, but by the state and provincial governments. And their interests are not always identical to those of the central government.

"These regional divisions are still huge barriers to global cooperation," he said.

During his time in China, Antholis found that the provincial governors in Guangdong and Jiangxi were devoted to lifting citizens out of poverty, creating environmental sustainability and eradicating corruption. In particular, the Guangdong provincial government accepts members of civil society, like citizen activist groups, as legitimate voices when crafting policy, contrary to the stereotype of a wholly repressive China. Antholis suggested that the Chinese provinces are testing grounds for new economic and political directions the national government is considering, with the local leaders trying to simultaneously fill the "values vacuum" found in Chinese politics.

Regarding India, Antholis emphasized the dramatic decentralization and economic liberalization that have taken place over the last 20 years. He contrasted Gujerat and Bihar as rival states, with the state chief minister of Gujerat using politics to deepen traditional Hindu and Muslim divisions and the chief minister of Bihar rejecting identity politics in favor of unity. Antholis explained the radical differences in Indian regional governance to create a deeper understanding of the country as a mosaic, not a unitary actor.

With many of these regional governors running states and provinces as vast and populous as countries, Antholis implored the U.S. government to learn more about Chinese and Indian regionalism as the countries continue to grow in global economic importance. His final message, however, was one of hope.

"I learned from my time abroad that we live in a world of widely shared goals," he said. "We are not destined to clash."

Michael Campbell '15, an international relations major with a special interest in China, said that Antholis "brought to light a fact that we should know intuitively but often ignore: that, like those in the U.S., India's states and China's provinces are distinct forces with their own cultural, economic, and international goals."

A student research assistant for the Teaching, Research, and International Policy (TRIP) project at the Institute for the Theory and Practice of International Relations. Campbell spent last summer in Beijing, where he conducted a knowledge survey of Chinese undergraduate and graduate students to evaluate the extent to which access to the internet affects knowledge of censored events.

"[Antholis] transformed his findings from his travels into terms and concepts relevant to the American public, academic community and policymakers," Campbell said. "China and India aren't ignoring these challenges, and neither should we."

During his day at W&M, Antholis also met with a smaller group of students who are conducting international research on the TRIP project, the Project on International Peace and Security (PIPS), and the project on the Environment, Food, and Conflict (ENFOCO). Along with the opportunity to discuss their own research interests with Antholis, the students were given valuable advice on pursuing careers at Brookings.

This event was co-sponsored by the Institute for the Theory and Practice of International Relations, the Reves Center for International Studies, the Roy R. Charles Center and the W&M Washington Office.