On November 21, a standing room only crowd packed into the Reves Room at the Reves Center for International Studies to hear Professor Philip Roessler, assistant professor of government at the College of William & Mary, and Harry Verhoeven, a Doctor of Philosophy (DPhil) student of the University of Oxford, discuss "Sudan’s Perfect Storm: What Next?," a roundtable discussion sponsored by the College’s Institute for the Theory and Practice of International Relations.

For more than an hour Roessler and Verhoeven explored the current state of Sudan and the crisis it faces after the separation of South Sudan. They also analyzed the causes and consequences of Sudan's partition, and policy options for the United States as Sudan faces a “perfect storm” of economic collapse, regional turmoil, civil war, internal factionalization, and the potential for a full-blown war between Sudan and South Sudan.

Roessler, who has regularly visited Sudan since 2002, has published on the political dynamics leading to the civil war in Darfur and is currently collaborating on a panel survey of approximately 1,400 randomly selected residents of Khartoum, which analyzes the effects of state partition on identity change, political attitudes and migration.

Verhoeven has also conducted extensive original research in Sudan, focusing on the evolution of the current regime since its seizure of power in 1989 and the link between water, state power, and modernization in the Nile River Valley.

“South Sudan is the newest state 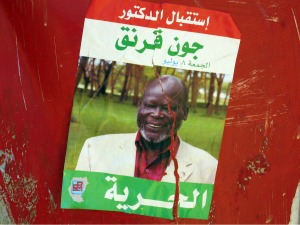 in the international system and its relations with Sudan to the north are fraught with complexity,” said Michael Tierney, director of the Institute for the Theory and Practice of International Relations at the College of William & Mary.

“We were incredibly fortunate to have two of the world’s brightest young scholars on Sudan help us sort through the issues raised by this uncertain relationship: cooperation on oil extraction and pipelines, the prospects for accountable government, the role of regional and international organizations, the role of foreign aid donors, and the possibility of war between these two states that once shared a single government.”

Roessler provided a comprehensive history of Sudan, including its colonization by the Ottomans and the British through the Comprehensive Peace Agreement (CPA) in 2005 and finally the independence of South Sudan in July 2011. He believes the discussion was important to alerting a new audience to the challenges Sudan and South Sudan face after partition.

“In the wake of the independence of South Sudan, the rump state of Sudan faces a number of critical challenges, including the economic shock of losing 75 percent of its oil production, new wars in South Kordofan and Blue Nile, an unresolved conflict in Darfur, demonstration effects from Libya and Egypt, and factionalization within the ruling party,” said Roessler.

“The country faces a real risk of state collapse unless major reforms are undertaken, such as the formation of a transitional government and the holding of an inclusive national conference to forge a new constitution.  It is important that William & Mary students gain a nuanced understanding of such complex events and go beyond the sound bytes retweeted on Twitter or linked to on Facebook.”

Students demonstrated a keen interest in the subject and peppered Roessler and Verhoeven with an array of questions, ranging from the local dynamics of the violence in South Kordofan to the effect of separation on oil contracts to the policy options available to the United States.  A lively discussion lasted well past the event’s publicized closing time.