For international relations major David Newbrander ’13, studying abroad is something of a way of life.

After growing up in Berlin, Germany, Newbrander spent two summers during high school working in France, then a summer in college interning at the Cambodian Embassy and studying Arabic in Morocco. Exploring Middle Eastern and North African culture whetted his appetite for further time in the Middle East.

With the help of the inaugural Todd W. Weaver Study Abroad Scholarship, Newbrander will return to the region to spend the spring semester in Amman, Jordan.

The scholarship, named to honor the memory of Todd W. Weaver ’08, who died in battle in Afghanistan in September, 2010, was opened to government and international relations majors to support study abroad in the spring or summer of 2012. It is the result of Weaver’s family and friends, who undertook a fund-raising campaign to create an endowed scholarship, as well as the efforts of participating student organizations and community groups. The original goal of raising $50,000 was exceeded in less than a year.

Under the First Lieutenant Todd W. Weaver Memorial Endowment, the first funding would become available in the 2012 -13 academic year. In order to award a scholarship in 2011 for the 2012 spring semester, an additional sum of money was raised, largely through the sale of paintings by Jeanne Weaver, Todd’s mother.

“The Weaver family and so many friends on and off campus have demonstrated their ability to turn the tragedy of Todd’s death into a beautiful legacy of hope and understanding,” said John McGlennon, department chair and professor of history. 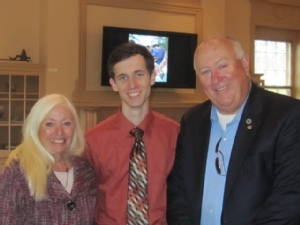 ed their own ambitious expectations for the endowment, and now they have even topped that by raising the money to begin the scholarship a year early. We in the government department are delighted that David Newbrander so nicely fits the objectives of the scholarship and emulates Todd’s passions so well.”

Newbrander himself recognizes how closely his interests match the terms of the scholarship, which require students to express how the funding will enable them to reflect Todd’s desire to better understand the world and to be of service to people in other nations.

“I think my desire to foster cross-cultural understanding was a strength in my application,” said Newbrander. “My interest in studying languages, Arabic in particular, is based on my keen interest in cultures and learning what different cultures can teach each other.”

While studying in Jordan, Newbrander plans to take language and international relations courses, and hopes to intern with a non-profit organization. He also looks forward to living with a Jordanian host family and immersing himself in Jordanian culture.

“My time in Jordan will be a tremendous help in understanding first-hand some of the issues that Jordan is facing as a middle eastern monarchy,” he said.

Newbrander is also a Monroe Scholar, one of the most academically distinguished undergraduates at the College of William & Mary, and says he will use his senior year to build on the understanding of Middle Eastern monarchies that studying in Jordan will offer. He already plans to do follow-up research next summer on “Monarchies and the Arab Spring.”

“I was honored to have been chosen,” said Newbrander of the Weaver Study Abroad Scholarship. “It is a privilege to carry on Todd Weaver’s legacy of dedication to public service and international understanding.”

Newbrander was recently interviewed on NewsChannel 3 regarding his award. More information on the Todd W. Weaver Study Abroad Scholarship can be obtained from the Government Department.