“What each of you have and what you must believe in, from this day forward, is your inherent uniqueness,” she said. “Your singular point of view. No one looks out onto the world through your eyes.

“Your perspective is unique. It’s important and it counts. Try not to compare it to anyone else. Accept it. Believe in it. Nurture it. Stay fiercely, joyously connected to the friends you have made here, to those you love and trust. You will have each other’s backs for the rest of your lives.”

Close, an award-winning actress, served as W&M's 2019 Commencement speaker. The event also served as the culmination of W&M's yearlong commemoration of 100 years of coeducation. Throughout the weekend, 1,438 undergraduate degrees and 764 graduate degrees were conferred.

Close received an honorary fellowship. She is only the third person in the university’s history to receive the honor.

“Glenn, for your talent, passion, fearlessness and hunger for knowledge, William & Mary is honored to count you among its most esteemed alumni,” said W&M President Katherine A. Rowe while presiding over her first Commencement since joining the university last summer.

Chancellor Robert M. Gates ’65, L.H.D. ’98 also addressed the graduates at the ceremony, saying that it is common purpose that ties the university’s generations of alumni together.

“The legacy of service — of making a difference for our communities and for our country — is the oldest and greatest tradition of this ancient institution,” he said.

“That shared legacy is what makes this home so special for all of us, so worth cherishing for a lifetime. And so as you graduate today, know that you, too, are destined to make a difference.”

Acknowledging the university’s 100th anniversary of coeducation and first woman president, Close said that although King William was likely “spinning in his grave,” Queen Mary had been “fist-pumping in the nether world for the past 100 years.”

“I’m proud to be here to help celebrate the women who have worked, taught and studied at this incredible institution,” said Close, adding that she was the first woman in her family to earn a college degree.

Growing up in a “cult-like group” that her parents had joined, Close decided she wanted to come to W&M after visiting the university with a singing group. The students who attended the show responded with looks that said, “Really?”

“That’s what I’d been secretly feeling for a long, long time, but I hadn’t had the courage to face it and do something about it,” said Close. “‘Really? Is this who I really am?’ Somehow, in spite of my ignorance, I sensed that on this campus, I would find kindred souls.”

Leaving the group, Close came to W&M at the age of 22 and soon found a mentor in Theatre Department Chair and Professor Howard Scammon, who cast her in “Twelfth Night.”

“I soaked up everything I could learn and, like a desert when the rains come, for the first time in my life I started to bloom,” she said. “The rest is history.”

One of the lessons that Close has learned throughout her career is that we all share a common humanity, she said.

“The exploration into each character I play has made me a more tolerant and empathetic person,” she said. “I have had to literally imagine myself in someone else’s shoes, looking out of someone else’s eyes. I urge you to learn how to do that. You can with practice. Start by being curious about the ‘whys’ of someone’s behavior. Before you judge someone, before you write them off, take the time to put yourself in their shoes and see how it feels.”

{{youtube:medium:left|VW1PWMyAB5c, The walk across campus}}

Another lesson that Close has learned has come through her work to end the stigma around mental illness. She founded the nonprofit Bring Change to Mind a decade ago with her sister, who lives with bipolar disorder, and nephew, who has schizophrenia.

“The fact is that, conservatively, one in six of us in this room is touched in some way by mental illness,” said Close. “It makes absolutely no sense to me that we don’t talk about it like any other chronic illness. Starting the conversation is the first step.”

Close was recently at an event where her nephew was asked what people should do if they encounter someone with mental health issues. He said, “Be kind.”

“Kindness. It’s a simple word, but it is essential if we are to survive as a species on this planet,” said Close, adding that humans have been so successful as a species because of our capacity to empathize.

“In order for the community, the tribe, to survive and thrive, we humans had to evolve the ability to register the emotions, the plight, the fears and the needs of other members of our tribe and to respond to them with empathy. We die without connection. Nothing is worse for us humans than to be bereft of community.”

In a small ceremony in the Wren Chapel following Commencement, the university surprised former W&M vice rector and chair of the W&M Real Estate Foundation John Gerdelman ’75 with an honorary degree. The honorary Doctor of Humane Letters degree was approved by the Board of Visitors during its April 2019 meeting.

In his remarks, Gerdelman spoke about his family’s long connection to William & Mary. In the early 1970s, then-football coach Lou Holtz was the first to contact Gerdelman and convinced him to come to W&M and play for the Tribe. A chemistry major, Gerdelman met his wife, Sue Hanna Gerdelman ‘76, in one of his classes. The rest has been history, he said.

“It’s so exciting to be here with you today,” he said. “It’s so wonderful that our kids have gone here and their spouses have gone here. It’s just such an honor. I really appreciate this. Thank you.” 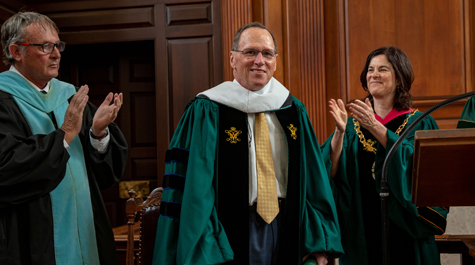 Gerdelman served seven years in the U.S. Navy as a pilot before embarking on a successful career in business management and information technology. He also served on the Campaign for William & Mary Steering Committee and was chair of what is now the William & Mary Foundation. Gerdelman served two terms on the W&M Board of Visitors, beginning in 2003. He became vice rector in 2007. The next year, he represented the board to the W&M Real Estate Foundation. Gerdelman also served as a member of the State Council for Higher Education and the Northern Virginia Technology Council.

He and his wife, Sue, have been longtime and generous supporters of the university, giving toward scholarships, professorships and other aspects of the school. The Gerdelmans regularly announce challenge gifts during the university’s annual giving day, One Tribe One Day. Sue Gerdelman serves as the chair of For the Bold: The Campaign for William & Mary, and serves as secretary of the Board of Visitors.

John Gerdelman received the Alumni Service Award from the W&M Alumni Association in 2001 and Alumni Medallion in 2005.

“John W. Gerdelman, you have positioned William & Mary to flourish for all time coming,” Rowe read from the citation. “Your alma mater is exceptionally grateful for your years of skillful leadership and devoted friendship.”

Along with Gerdelman, many other members of the William & Mary community were honored during Commencement weekend.

On Friday, R. Alexander Kurland, a parent of a W&M alumnus and longtime supporter of the university, was inducted as an honorary alumnus.

At the Commencement ceremony Saturday morning, several awards were presented to faculty and students. The Lord Botetourt Medal was presented to Emily Martell ’19, and the James Frederic Carr Memorial Cup went to Corey York ’19. Yi Hao Ph.D. ’19 was awarded the Thatcher Prize for Excellence in Graduate and Professional Study, and Susan Donaldson, professor of English and American Studies, and Lynda L. Butler, chancellor professor of law, took home the Thomas Ashley Graves Jr. Awards for Sustained Excellence in Teaching. This year’s Algernon Sydney Sullivan Awards for students went to Zauhirah Tipu ’19 and Jerome Shaen ’19; Frances L. and Edwin L. Cummings Associate Professor of History and Africana Studies Robert Trent Vinson, who was unable to attend the ceremony, will receive the Algernon Sydney Sullivan Award for faculty at another time. More on the awards may be found here.

Rhea Sharma ’19, who was selected as the student Commencement speaker, encouraged her fellow graduates to keep up the practice of breaking traditions.

“Continue to let that fire, that deep hunger for progress, inclusion and change, burn bright inside your hearts because tradition never graduates – but today, we do!” she said.

During Saturday afternoon’s diploma ceremony for graduate business students, Kyle Milliken, a Navy SEAL who was killed in action in 2017, was remembered. A student in the Online MBA program, Milliken would have graduated on Saturday. His wife and mother attended the ceremony and were recognized on his behalf.

Along with departmental ceremonies, Commencement weekend featured multiple special events, including the commissioning of four ROTC cadets and the inaugural Ceremonia Raíces for Latinx students. In its second year, the Lavender ceremony for LGBT students saw a significant increase in participants, with 70 students attending. 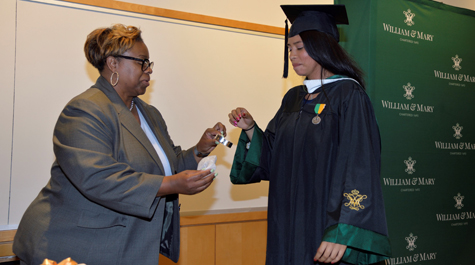 At the conclusion of the Commencement ceremony, Rowe surprised Provost Michael R. Halleran by asking him to the podium praising him for the work he has done at the university for the past decade. Halleran announced last fall that he would be stepping down at the end of the academic year to return to the classroom.

“The university owes immense gratitude to Provost Halleran, and I am grateful to him for his partnership this past year,” said Rowe.

As she concluded the ceremony, Rowe recalled the life of Mary-Cooke Branch Munford, the first woman to serve on the Board of Visitors.

“She was a leader who lifted as she climbed,” said Rowe, adding that her life should inspire the graduates to “extend the invitation to come study to the next generation.”

“Extend a hand to those who follow, and remember that you are always a part of this level-headed and fearless William & Mary family,” she said.

Brian Whitson contributed to this story.