One has worked to promote suicide prevention and improve mental-health initiatives. The other has volunteered to protect and serve the William & Mary community for nearly two decades. Both will honored during the university’s 2018 Opening Convocation ceremony Aug. 29 in the Wren Yard.

Tom Chamberlain, a volunteer police officer with the W&M Police Department, and Danny McNeil ’19 have been selected as the recipients of this year’s President’s Award for Service to the Community.

The President’s Office and the Office of Community Engagement present the award annually to a student and a staff or faculty member who have “demonstrated a sustained commitment to service and made a significant and measurable impact on our community,” according to the award website.

“Both Danny McNeil and Tom Chamberlain have brought depth and breadth to their engagement with community,” said Melody Porter, director of the Office of Community Engagement. “Tom has not shied away from opportunities to support communities he believes in, whether by taking on a leadership position in a community group, getting his hands (literally) dirty as a handy person and laborer, or spending many hours to be present with people and keep them safe.

“Danny's practices of empathy, responsibility and curiosity have allowed him to explore and challenge marginalization for many communities of people, including Native American students and adolescents with mental health concerns, and for the purposes of intentional education and positive action with others; throughout, he has been reflective about his growth and choices as an active citizen.” 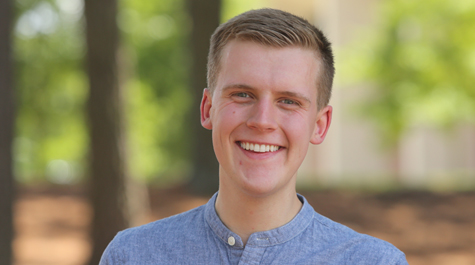 McNeil has chaired the W&M Out of the Darkness suicide prevention walk since 2016, its inaugural year. More than 750 members of the campus and local communities have since participated in the event, which seeks to raise awareness and funding for suicide prevention efforts. Since its inception, more than $30,000 has been raised through the walk.

McNeil has also served as a clinical volunteer with several community organizations, including Eastern State Hospital, Lackey Free Clinic, the Arc of Greater Williamsburg and the One Child Center for Autism.

Internationally, McNeil worked as a member of the Olderkesi East Africa Project, teaching a class on leadership, health and sexual education at a rural school in Kenya.

His service work at W&M began during his freshman year as a Sharpe Community Scholar when he explored the cultural experiences of American Indian students on campus. He later served as a Sharpe Scholar Teaching Fellow, supporting students in the Reimagining Communities and Health Disparities classes and leading a Mental Health Working Group to develop ways to improve campus mental health.

A psychology major, McNeil’s research work has also centered on the community. As a member of Psychological Sciences Professor Janice Zeman’s Social and Development Lab, he worked on a project to study the emotional development of local middle school students. McNeil’s honors thesis was spawned by that effort and focuses on the role of parents in the positive mental health of their children.

“Danny McNeil models the intended growth and development of an active citizen scholar at W&M,” Monica Griffin, director of the Sharpe Community Scholars Program, wrote in a recommendation letter. “He is nothing short of beloved by his peers and by incoming freshman who benefit from his mentorship in Sharpe. Our campus community, offices, and classrooms are all better places with him in them. He is consistently a delight to staff, an engaged scholar with faculty and a role model to his peers.” 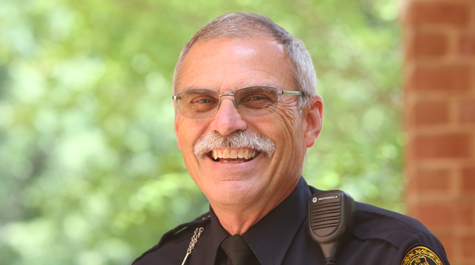 Chamberlain has worked closely with students during his 18 years as a W&M auxiliary police officer, receiving the same training and performing the same duties as his colleagues but without compensation.

He has also worked closely with students during his 20 years serving with the Catholic Campus Ministry. He is currently a member of that organization’s advisory board, and he has long hosted pool parties, murder mystery dinners and other activities for students. Chamberlain also “adopts” a student each year through the ministry, providing that person with meals, conversation and other support while they are away from home.

Chamberlain, who served as a Boy Scout leader for 35 years, also supports Dream Catchers Therapeutic Riding Center where he provides maintenance and electrical work and helps to maintain the pastures and barns. He is also a volunteer driver for Williamsburg Faith in Action, taking people who can’t drive to appointments.

“Tom spends a significant amount of his own time and money to make the greater community a better place for all,” Maj. Don Butler wrote in a recommendation letter. “Even more importantly, he spends a tremendous amount of time and energy making the William & Mary community, specifically, a better, safer and happier place.”