Seven William & Mary ROTC cadets will be commissioned as officers in the U.S. Army during a May 11 ceremony on campus.

Lt. Gen. Theodore D. Martin, deputy commanding general/chief of staff of the U.S. Army’s Training and Doctrine Command, will commission the cadets and speak at the ceremony, scheduled for 12:30 p.m. in the Commonwealth Auditorium.

Menhart, a W&M professor of military science, took over as department chair last summer after Army Lt. Col. James M. Kimbrough retired after four years at the university and 22 in the U.S. Army.

"I am so proud of and confident in our newly commissioned second lieutenants,” Menhart said. “They have the ability and leadership skills to instantaneously contribute to the Army.  Our program here at William & Mary continues to safeguard leaders of character and quality second lieutenants for the Department of Army, thanks to the support we receive from the faculty, administration and staff."

The cadets to be commissioned are: 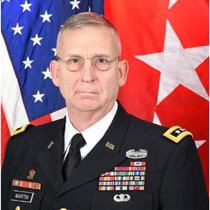 Martin assumed duties as deputy commanding general/chief of staff at TRADOC in March.

Martin’s family military heritage goes back more than 10 generations to 1776 when Pvt. Daniel Martin enlisted in the 1st New Jersey Infantry Regiment and fought the British during the American Revolution, including service at Valley Forge. Lt. Gen. Martin graduated from the United States Military Academy in 1983 and was commissioned a second lieutenant of armor.

W&M’s Commencement will take place May 12 at 9 a.m. at Zable Stadium, and for the second year red, white and blue graduation cords will be available for student veterans to wear at the ceremony.