Associate Professor of Sociology Deenesh Sohoni and Yosselin Turcios ’20 researched the deportation of U.S. military veterans who are non-citizens throughout Turcios’ four years at William & Mary.

That work has culminated in the acceptance of their paper “Discarded Loyalty: The Deportation of Immigrant Veterans” for publication in Lewis and Clark Law Review next year. The paper examines non-citizen veterans who have been deported after committing criminal acts and the issues and complications surrounding their cases, according to Sohoni.

“Writing this paper has been one of my greatest achievements, and I hope to inspire other first-generation students to pursue their research interests,” said Turcios.

The paper compares the deportation of non-citizen veterans today with the failure of the U.S. government to grant citizenship to foreign-born Asian-American military veterans in the first half of the 20th century, using that as a means to explore the role of the legal system in adjudicating between two competing views regarding immigration, according to its abstract. It argues that despite the U.S.’s professed belief in the importance of patriotism for national belonging, support for granting citizenship to foreign-born veterans has frequently given way to broader racialized and restrictive tendencies that manifest explicitly and implicitly within the legal system, the abstract says. 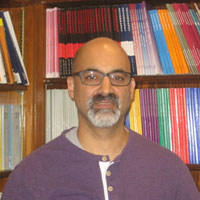 Today, approximately 5% of the U.S. military consists of immigrants, with most coming from Latin America and Asia, he added. Sohoni’s earlier research examined how foreign-born Asian Americans in the first half of the 20th century sought citizenship through their military service, but were denied by court rulings that the more general race-based immigration and naturalization laws took precedence over military naturalization laws. The current paper compares this historical period with the contemporary deportation of non-citizen U.S. military veterans who have committed crimes.

In examining the conflicting ideologies of immigrants as both people who can work and make the country better and as a threat to national identity, Sohoni honed in on how and why U.S. military veterans who were immigrants were being deported.

“And the reason they were being deported is because they had engaged in criminal activity,” Sohoni said. “And so we’ve started to create what some of the legal scholars have called a ‘crimmigration’ regime, where criminal law gets tied to immigration law. Today, what was happening is that more and more criminal kind of activities have become considered deportable offenses.

“And so originally serious offenses were things like murder, rape and so forth. But now shoplifting or other types of things such as minor drug offenses have also become considered to be potentially a deportable offense.”

For non-citizen veterans who fail to complete the naturalization process, these criminal offenses can become deportable offenses, according to Sohoni.

“In addition, many types of criminal offenses such as drug abuse, or violence, can be traced to their military service, where rates of post-traumatic stress disorder, suicide and other mental illness have been on the rise for both citizen and non-citizen service members and veterans,” Sohoni said. “Yet, while judges can give leeway to military veterans who are citizens, more recent legislation doesn’t allow judges to look at mitigating circumstances for non-citizen veterans.

Turcios took a class with Sohoni her freshman year and started working with him the following summer as part of the W&M Undergraduate Scholars Undergraduate Research Experience summer research grant.

“One of my projects at that time was on the legal regime that was allowing the present day deportation of non-citizen military veterans if they had been charged/convicted of felonies,” Sohoni said. “Given her interest in public health issues, I had her work on the mental health issues that many citizen and non-citizen veterans faced when transitioning into civilian life. These two sections eventually became combined in what became the current article.”

Turcios, who will start working on a Master of Public Health in community health and prevention at Drexel University in the fall, said that as a first-generation student she came to W&M unfamiliar with undergraduate research and looking for opportunities.

A double major in psychological sciences and public health, she ended up co-authoring a law paper with sociology faculty.

“At first, writing a paper seemed daunting,” Turcios said. “But my experience taught me how I can use my interests to inform my research pursuits and how intricate writing an academic paper can be. Co-authoring a paper helped build my confidence in writing academic papers and taught me invaluable skills such as conducting literature reviews and data management.

“Spending the summer after my freshman year working with Professor Sohoni has been one of the most rewarding experiences of my undergraduate career.”

After initially presenting her research at the Charles Center Summer Research Showcase in 2017, Turcios found that many attendees were unaware of the issue and assumed that non-citizens automatically become citizens once they joined the U.S. armed forces.

“This motivated me to study the bureaucratic barriers non-citizen veterans face when trying to become naturalized citizens and to discuss how difficult and complex naturalization is,” she said. “Through my research, I began to learn of the dissonance that exists in the military naturalization process since immigrant veterans joined the armed forces to prove their patriotism and to protect their adopted country, yet their service can go unrewarded.

“Immigration is a contentious issue, and with this paper I hope that people learn of how interconnected immigration and criminal law have become over the past decades and the impact this has had on noncitizen veterans. Most importantly, I hope readers recognize the sacrifice and injustice immigrants face when trying to prove themselves worthy of citizenship.”