What is likely the oldest extant building in the Northern Hemisphere used for the purpose of educating enslaved and free Black children is relocating to Colonial Williamsburg’s historic campus. Eight months after researchers from Colonial Williamsburg and William & Mary announced they had identified the original Williamsburg Bray School – and four months after the researchers conclusively verified its identity – the two organizations today announced the site of the building’s future home on the living-history museum’s historic campus where it will become a central point of interpretive focus in the foundation’s ongoing efforts to tell a more complete story of 18th-century America.

During a ceremony held today inside Colonial Williamsburg’s Hennage Auditorium, the two educational institutions also announced the creation of a joint research initiative to document the history of the school and its students, which will lead to new interpretive programming that explores the complicated history of this 18th-century institution dedicated to the education of Black children.

Renovations performed over the years have obscured the original structure of the small, white building currently situated at 524 Prince George Street, two blocks east of its original location at the intersection of North Boundary and Prince George streets. The modern additions make it difficult to visualize the 18th-century schoolhouse that has captured the attention of historians and the public alike. 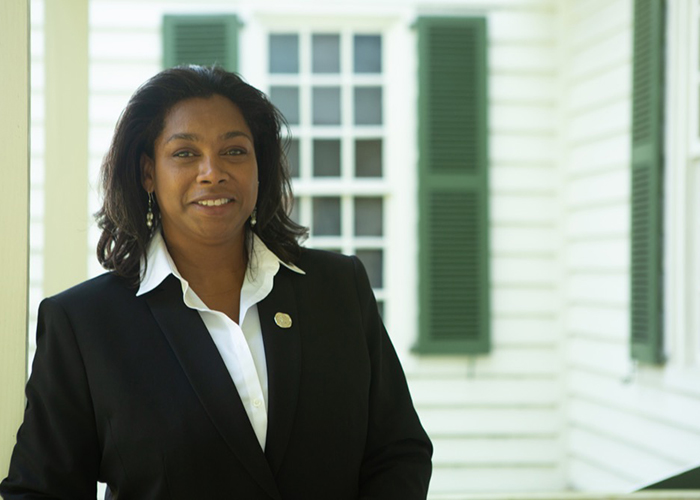 That will change over the next several years through a special arrangement between the university and the foundation. As part of the agreement, the newly formed Bray School Board voted unanimously on Sept. 13, 2021, to approve Colonial Williamsburg’s purchase of the building, remove the modern additions to the building and transport it to its permanent home at the northwest corner of the intersection of Francis and South Nassau streets where it will be restored to its original state and used in the foundation’s public history programming.

Upon its arrival, the Williamsburg Bray School will become the 89th original structure on Colonial Williamsburg’s campus — the first new addition to the Foundation’s cadre of historic buildings since the 1960s. The foundation anticipates restoring this nationally significant structure by 2024, which marks the 250th anniversary of the school’s closure on the eve of the American Revolution.

Purchase of the building is made possible by a grant from Truist Financial Corporation through its Truist Charitable Fund, a donor-advised fund at The Winston-Salem Foundation.

“Truist is proud to support efforts to ensure Williamsburg Bray School has a prominent and permanent home on Colonial Williamsburg’s campus,” said Thomas Ransom, Virginia regional president for Truist. “Stories of Bray School’s rich history will live on, ensuring future generations understand its significance and the people who were part of it.”

Additionally, Colonial Williamsburg’s initial work to restore, transport and interpret the Bray School’s historic structure is possible in part thanks to a grant from the Gladys and Franklin Clark Foundation. A major component of the partnership includes the creation of the William & Mary Bray School Lab that will document the school’s history to fully understand its complex legacy. Funding for the lab’s development has been made possible by a generous lead gift from William & Mary alumni Steven and Gale Kohlhagen.

“This nondescript building that was hidden in plain sight for decades is taking The Colonial Williamsburg Foundation and William & Mary in a new and exciting direction,” said Cliff Fleet, president and CEO of Colonial Williamsburg. “Thanks to the generosity of Truist, the Gladys and Franklin Clark Foundation and Steve and Gale Kohlhagen, we are able to fully research and interpret the story of the Williamsburg Bray School. This important work will expand our understanding of 18th-century America and add to our body of knowledge about this important time in our nation’s history. These new stories will be passed along through our public history programming and offer visitors a richer and deeper connection to our shared past.”

Additional funds are being raised by both institutions: Colonial Williamsburg is securing funds to complete the restoration and support interpretive work, and William & Mary is fundraising to expand the William & Mary Bray School Lab.

“This partnership between William & Mary and Colonial Williamsburg promises to transform our nation’s understanding of the intertwined histories of race, slavery, education and religion in America,” William & Mary President Katherine A. Rowe said. “Each intersects in the story of the Bray School. Bray School research will illuminate what it means to educate justly — William & Mary’s commitment for all times coming.”

William & Mary is also requesting state support for the project, including funding the research teams to study the Bray School and other similar projects. State Senator Monty Mason from Williamsburg and Delegate Cliff Hayes, Jr. from Chesapeake attended today’s ceremony and offered their support.

“This initiative will position Williamsburg as a model for broadening and deepening nation-wide dialogue around the origins of our democracy, leading up to the 250th anniversary of our nation’s founding in 2026,” Mason said. “It is hard to overstate the importance of this work to our community, region, and Commonwealth.”

Hayes added, “Like the Cornland School in Chesapeake, Bray School has an empowering story to tell and now more than ever we need to tell the full story of the Bray School and its importance in African American history.”

The William & Mary Bray School Lab consists of William & Mary students, faculty and collaborators whose research is focused on gaining a deeper understanding of the school from the perspectives of families whose children attended it. They also are examining the motivations of the founders who developed the institution and its pro-Christian curriculum in which white slaveowners sent Black children to this school to receive indoctrination in the Christian faith.

Most importantly, the lab will explore the legacies of the children who took ownership of their education and used it in ways the founders never intended. Colonial Williamsburg will bring this important research to life through rich and detailed narratives using the restored Bray School as a backdrop to interpret the lives of those with ties to the school.

“A multidirectional flow of research is essential to understanding more about the school and, particularly, the students,” said Ann Marie Stock, the university’s presidential liaison for Strategic Cultural Partnerships, who will oversee research operations regarding the Bray School. “We’ll be doing descendant research, conducting oral histories to document the restoration while getting input from visitors and the local community. It’s an exciting expansion of our approach to research. By engaging the community in this endeavor, we will catalyze collaboration across boundaries and ensure a broad range of perspectives.”

Professor, author and humanities scholar Maureen Elgersman Lee serves as Mellon Engagement Coordinator for African American Heritage and Culture at William & Mary and will simultaneously serve as Director of the William & Mary Bray School Lab. Elgersman Lee is former chair of the Department of Political Science and History at Hampton University. She brings a wealth of knowledge to the program, including serving as Executive Director for the Black History Museum and Cultural Center of Virginia in Richmond, Va., and authoring books and articles focusing on the African diaspora.

From her office in Colonial Williamsburg’s Travis House at the corner of Francis and Henry streets, which serves as the William & Mary Bray School Lab, Elgersman Lee will guide the day-to-day research and coordinate with university faculty, external scholars, graduate students, undergraduates and Bray School descendants.

“I’m excited about the model of the lab,” Elgersman Lee said. “It’s vertical integration, a broad group of individuals who all play a role and get to contribute to the thinking, imagination and study of the Bray School and the dissemination of its story. This is a lab for collaboration.”

Nicole Brown, a member of Colonial Williamsburg’s corps of Nation Builder interpreters who portrays Bray School Headmistress Ann Wager, will join the research lab team on a part-time basis. A master’s student in American Studies at the university, Brown has conducted considerable research on the Bray School and will join the team as the William & Mary Bray School Lab Assistant while pursuing her master’s degree. Brown will continue part-time in her role as Ann Wager at the foundation.

“The work of Nicole Brown – her own personal research, her graduate research and her experience as a living-history interpreter at Colonial Williamsburg – will add so much to the work of the lab,” Elgersman Lee said. “She really problematizes the education of enslaved Black children during that period, because it was not provided as a means of self-actualization. It was pragmatic, the actions of slave owners to further claim and control their chattel, a certain amount of education delivered through certain means of catechism. But it was education, nonetheless, and Blacks had agency to use it for their benefit.”

The latter is comprised of community leaders representing local church congregations, local educators, former elected officials and Terry Meyers, a William & Mary professor emeritus of English whose initial research led to the discovery of the original structure. The council will help ensure that researchers engage the broadest possible number of voices and visions so that they consider a wide and diverse range of perspectives. The Board will review this input and make recommendations to advance the Bray School initiative.

“The lab creates an incredible opportunity to continue to welcome the local community into the academic spaces where we have traditionally formed our understanding of history and culture,” Elgersman Lee said. “As a historian, and as someone who has worked in community history, I’ve learned that the history often resides much more in the community than in the academic spaces. I see building and strengthening these bonds as an essential component of lab work.”

The Bray School partnership continues a tradition of collaboration between William & Mary and The Colonial Williamsburg Foundation, which includes the reestablishment of Colonial Williamsburg along with the university to support the Omohundro Institute of Early American History & Culture, and a joint partnership with the Greater Williamsburg community that includes members of the city’s Historic First Baptist Church to research and interpret the church’s first permanent site on South Nassau Street.

This release was produced in coordination with Colonial Williamsburg.