William & Mary’s Office of Graduate Studies & Research has announced the 2022 recipients of the S. Laurie Sanderson Awards for Excellence in Undergraduate Mentoring.

The awards honor S. Laurie Sanderson, who served as Arts & Sciences dean of graduate studies from July 1, 2005 to June 30, 2012. They recognize master’s and doctoral students in Arts & Sciences programs who have demonstrated a high degree of commitment in out-of-the-classroom contributions to the research and scholarly development of undergraduates. 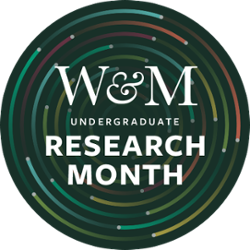 “The responses I receive from graduate students when they learn they are to receive a Sanderson Award are the highlight of my day,” said Virginia Torczon, current dean of graduate studies and research. “They are truly honored to have been selected for this award. They report the pleasure it has given them to work with outstanding William & Mary undergraduate students – one of the best parts of their graduate school experiences at William & Mary.”

Sarah Glosson, director of the Arts & Sciences Graduate Center, noted that the purpose of the Sanderson Award is to recognize the valuable “under the radar” contributions of graduate students.

“I myself received a Sanderson many years ago,” Glosson said. “And the undergrad who nominated me now has a Ph.D. and a dozen publications and we’re still in touch. So, it’s very meaningful to me, for certain.”

“As our graduate students prepare for the next steps in their professional career, they acknowledge that the experiences they have gained mentoring undergraduates will serve them well as teachers, mentors, and scholars,” Torczon concluded. “It truly is a win-win situation for everyone.”

Heather Baier has been a mainstay in geoLab, the collection of data-rich, student-run, AI-based initiatives at William & Mary. Dan Runfola, assistant professor and director of graduate studies in the applied science department, says Baier has provided a spectrum of help, advice and assistance to the undergraduate students involved in many geoLab projects.

“Heather has been instrumental in standing up a new data collection initiative called the Global Education Observatory, which collected school education information and makes it public — frequently through freedom of information act requests,” Runfola wrote in his nomination of Baier for the Sanderson award. “She has single-handedly helped to motivate and mobilize a group of approximately six students to implement these activities, resulting in undergraduates working hands-on with departments of education globally.”

Undergraduates who have worked with Baier supported her nomination for the award: “All of geoLab knows to go to Heather with questions on how to get code to work,” wrote Maeve Naughton-Rockwell ’22.

“I know for a fact that geoLab would not be as productive without Heather,” Naughton-Rockwell wrote. “She has been a key part of many of the papers and projects at geoLab.”

“I believe that my acceptance into an internship with National Parks Service was aided in large part by Heather working with me to draft and edit cover letters and my resume.” O’Brien wrote.

Catherine Forestell, associate professor of psychological sciences, says that she usually mentors 8 to 10 undergraduate students in her lab, along with a grad student or two. They work as a team to design experiments and collect data.

Forestell wrote of Krishnamurti’s inclusion of undergraduates in research practices, fostering curiosity, a work ethic and a sense of excitement among the students. She cited Krishnamurti’s involvement in projects in which students collected data from nearly 500 participants, plus collecting and analyzing content from around 1,000 magazine articles.

“I worked closely on the content analyses and observed first-hand the excellent quality of the work. In addition to tremendously improving research productivity and quality, Harini's efforts have instilled a strong sense of community among the students,” Forestell wrote. “My students and I are grateful for her willingness to share her time and positive energy.”

Matt Siroty ’23 is one such student. He wrote in support of Forestell’s nomination that Krishnamurti welcomed him into the Child Development and Eating Behavior Lab. He became interested in Krishnamurti’s own research, which involves assessing the expression of biases against vegetarians.

“Harini invited me into her office to discuss what working on her project would be like,” Siroty wrote. “Throughout the Fall 2021 semester working with Harini, I got to know her on a personal level; she gave me advice on graduate school and careers, we talked about our personal lives, and we discussed our shared passion for psychology.”

Another undergraduate, Leah Kappel ’22, also wrote in support of Krishnamurti. Kappel is another member of the Eating Behavior Lab and found Krishnamurti a friendly, approachable and valuable resource.

“From the beginning, she was the person I went to if I had any lab-related questions and she was always eager to help and guide me,” Kappel wrote. “When I was debating doing an honors thesis, she was a helpful support in the process, and provided wisdom that only Harini can give.”

Rebekah Planto has been conducting doctoral fieldwork at Bacon’s Castle, the 17th-century site rich in both history and artifacts. Audrey Horning, the Forrest D. Murden Professor in the Department of Anthropology, notes that Planto has included undergraduate students in her work.

“Working with Rebekah, students — including several she had formally mentored as part of the summer W&M and Colonial Williamsburg Foundation archaeological field school — gained additional archaeological experience and expertise at this significant early Virginia site,” Horning wrote in nominating Planto.

Through Planto’s mentorship, the undergrads gained skills in field, laboratory and archival methods, “all of which contribute to career development and employability,” Horning wrote.

“In a concrete sense, Rebekah was a formative influence on Matt Forcier's decision to pursue his master’s in historical archaeology. The archival training he received with Rebekah has also supported his contributions to a grant-funded project with anthropology department colleagues.”

Lacy McLain ’23 was one of the students that Planto mentored during an archaeological field study. Planto taught the undergraduate researchers “things that can’t be taught in textbooks,” McLain wrote.

“She helped each and every one of us succeed in a course that was based almost entirely on hands-on experience,” McLain wrote. “She used her experience working at Bacon's Castle to help us understand the rigorous and demanding physical work that goes into archaeological discovery. As a direct result of her mentoring, I not only received an A in the course but actually found myself fully understanding the ins and outs of the field by the end of the course.”

Danielle Dallaire pointed out in her letter of nomination that Jen Traver was a 2019 graduate of the Department of Psychological Sciences undergraduate program and came right back to enroll in the M.S. program in 2020.

“I think that perhaps because Jen was a W&M UG, she really has a better understanding of W&M UG students,” wrote Dallaire, a professor in the department. “Although our lab was mostly online during the 2020-2021 academic year, she went out of her way to mentor the 9-10 UG students in my lab.”

Dallaire notes that Traver has helped the undergrads prepare posters for conference presentations as well as a number of papers submitted to peer-reviewed journals. She said Traver also worked with the students to design an in-person study that launched last year and has mentored several undergraduates’ honors theses.

Grace Phillips ’23 wrote in support of Traver’s nomination, relating that the two met through the Healthy Beginnings Research Lab. Phillips said that Traver has been more than helpful in another project, one that uses EEG to study the neurological biomarkers of stress resilience among college students.

“None of it would have been possible without Jen. While it may have been easier to conduct herself, she chose to fully include me in the research from start to finish,” Phillips wrote. “Jen works tirelessly to ensure that each member of our research lab feels included, understands our project goals, and can voice their ideas in our meetings.”

Dallaire said that Traver has been “an exceptional role model” to Phillips and a number of other undergraduates in the psych department.

“She has helped them prepare graduate school applications, she has worked with them on data analysis,” Dallaire wrote. “I am impressed with how she patiently works with them to analyze their data, so that they understand how to do it themselves.”