A William & Mary student will compete for the Miss America crown on Saturday, Jan. 12. 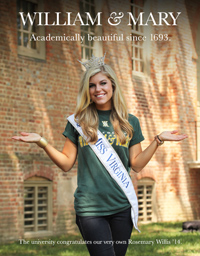 Rosemary Willis will represent the Commonwealth in the competition as Miss Virginia. The event, which will take place at Planet Hollywood in Las Vegas, will air live on ABC at 9 p.m. EST.

A native of Chesapeake, Va., Willis was crowned Miss Virginia in July 2012. Her platform, "Get Moving Today for a Healthier Tomorrow," promotes exercise and physical activity as a way to improve one’s overall quality of life.

Willis, who is majoring in government and minoring in kinesiology, has taken the year off from her studies to fulfill her duties as Miss Virginia, travelling across the Commonwealth. However, she visited the campus in August 2012 to talk to students and tour groups and promote healthy living.

As a student at the College, Willis has taught exercise classes at the Student Recreation Center and performed as a member of The Accidentals, an a capella group.

Two years ago, another William & Mary student participated in a national pageant. Samatha Casey, a native of Jeffersonton, Va., competed in the 2010 Miss USA pageant after being crowned as Miss Virginia USA in 2009.