Most students hope for an A for their midterm projects. Thomas Vandiver ’13 got a whole business from his.

What started as a project for an elective at the Raymond A. Mason School of Business is now The Neighborhood Harvest, a Hampton Roads-based home delivery service for local organic produce, meats, dairy, bread, prepared food and more from local small businesses and farms.

In a time when many companies are shrinking, they have grown from making around 2,600 deliveries a week to almost 5,000, as stay-at-home orders and understocked stores encourage more people to order their groceries for delivery. 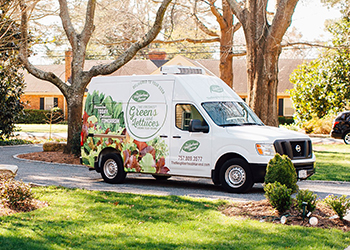 Though other businesses are laying off workers, The Neighborhood Harvest has hired 30 new staff members to handle the demand — many of whom were laid off from the food service industry due to the crisis — and are helping keep their suppliers’ farms and businesses alive.

And it all started with a class.

“That's the story of the Neighborhood Harvest, from these misty little dreams to where we are today. We're so blessed with what we have been given to make lemonade out of what is otherwise a big pile of lemons,” says Vandiver.

As a government and Middle Eastern studies double major, Vandiver hadn’t set out to take a class at the business school. However, he was also working at the now-closed restaurant The Crust on Richmond Road as a bartender. At the time, The Crust was experimenting with being student-run.

John Stein, the CEO and owner of The Crust’s parent company, The Baker’s Crust, and Eric Coble, the CFO, encouraged their employees to take a business school class they were teaching: “Sustainability/Green Supply Chain.” Vandiver signed up.

The class focused on supplying, creating and distributing products in an environmentally-, ecologically-, and socially- responsible way. The midterm required students to work in teams to redesign some element of the supply chain to meet these three responsibilities. Vandiver and his partners started to look into hydroponic gardens — growing plants in water instead of soil — and how they could use the power of the sun, despite being indoors.

Their final project — a greenhouse that lets sunlight in and allows you to grow basil hydroponically year round — earned them an A, and an offer. Would they like to go into business with their professors and make this happen, for real?

“I found all this totally fascinating, but I never envisioned actually doing it,” says Vandiver. “But like many William & Mary students, I love a challenge.”

Vandiver said yes, and the three business partners built a 18,000-square-foot greenhouse (for economies of scale) in Suffolk (near to Sysco foods, a major distributor) and began growing basil. At the time, basil was mostly imported, so their basil could fetch almost $10 per pound — and in the summertime, they were growing more than a ton a week.

They called their company SmartBasil LLC. Soon they had a booming business, distributing through Sysco to restaurants and food service.

Then, suddenly, import and trade laws changed, and the bottom fell out of the basil market. Cheap, lower-quality basil flooded grocery stores.

“We had all this demand from customers who were eating our basil at restaurants and asking ‘How do I get some? This is better than what I can find at home,’” says Vandiver. “So we went into grocery stores with lettuce, greens and basil.”

Before long, though, the business partners were dissatisfied with the way grocery stores were stocking their basil — keeping it on shelves after it had wilted, for example. The home delivery market was growing, as was community-supported agriculture (CSAs), where farmers make regular deliveries of produce and more to local residents. 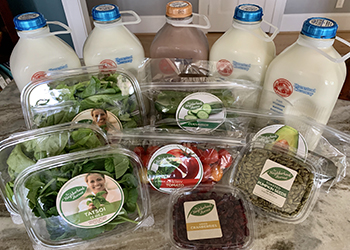 SmartBasil became The Neighborhood Harvest, switching its greenhouse over to vegetables of all kinds. They formed partnerships with local farmers and other businesses to provide meat, dairy, bread and pre-packaged foods as well.

“We’re now the farmers market delivered to your house,” says Vandiver.  “If it's milk, it's in a glass bottle. If it's beef, it's grass fed. If it's produce, it's organic or pesticide free. Eggs are pasture raised. Yes, our service is a bit more expensive than the grocery store on some items, but we’ve found the market will reward a quality product that has values and stands behind its mission.”

He credits his liberal arts education at William & Mary for helping set him up for success.

“Thinking critically is a bit of a dying art, but entrepreneurs are called on more than ever before to developing products and services in a socially responsible way,” he says. “I didn’t come into this from a business owner’s mindset, but as a problem solver and as a critical thinker. William & Mary made me capable of thinking quick, pivoting, adapting and seizing opportunities. John and Eric have the industry knowledge, and we complement each other well.”

Now, the new Entrepreneurship Hub occupies the space where Vandiver once tended bar at The Crust — helping students from all majors build businesses of their own. No midterms required.