Collecting tick specimens is easy—you drag a white piece of canvas over the right piece of ground, then turn it over. Voila—ticks!

If the actual collection of ticks is easy, it’s also nasty work. Working with ticks can be dangerous, too, which is why Joanna Weeks ’13 wants to be sure that her tick collectors are mentioned in this story.  So, for the record, Joseph Thompson ’14, Alan Harris ’14, Stephanie Wilson ’12, Chris Tyson ’12, Matthew Feresten ’12 and Nora Wicks ’12 got out into the woods, made sure their coordinates were right, and dragged the white canvas—known as a flag—through tickland. Repeatedly.

Weeks based her William & Mary senior honors project on Amblyomma americanum, known as the lone star tick. It’s a common woodland parasite and Weeks and her collaborators are finding a widely distributed lone star tick population in the woods of the Virginia Peninsula.

“They are the most common tick in the south of the United States—that includes Virginia,” Weeks said during a presentation of her research at the annual meeting of the Wilson Ornithological Society, held at William & Mary in early spring. “They are aggressive and indiscriminate feeders, take three blood meals during their lifetimes and can bite humans and transmit disease as larvae, nymphs and as adults.”

The habits of Amblyomma americanum are unpleasant enough from the human point of view, but wait, there’s more: Weeks has also found that a uncomfortably significant number of the ticks she sampled carry Ehrlichia chaffeensis, the bacterium responsible for human monocytic ehrlichiosis, or HME. Like Lyme disease, HME is tick-borne. It’s established a foothold on the Virginia Peninsula and it’s almost certainly under diagnosed. Weeks outlined the seriousness of HME in her Wilson Society presentation.

“It causes about 41 to 63 percent of patients diagnosed to be hospitalized. It has a case fatality rate of 1.73 percent,” Weeks continued, although she noted that annual fatality rates for HME vary from zero in 2005 to 3.7 in 2003. “Just to give you some relevancy to those figures, the worst influenza pandemic in history—the Spanish flu—had a case fatality rate of 2.5 percent, so that gives you an idea of the severity of the disease.”

Weeks’ tick study involved lab work as well as field work, so she worked with both Matthias Leu and Oliver Kerscher, both faculty in William & Mary’s Department of Biology. Leu and Kerscher are friends, but Leu is a spatial ecologist, logging a lot of time in the field, while Kerscher studies the DNA of yeast; their professional paths rarely cross.

“Matthias is not scared of molecular biology and while I am pretty clueless about ecology, I do enjoy, you know, talking about conservation biology,” Kerscher said.

Weeks needed both a field biologist and a laboratory biologist as mentors on her project. Ticks may be ridiculously easy to collect, but once you have them on your flag, you have a set of challenges on your hands. The first step is to get your ticks off the flag.

“We used to take masking tape—painters’ masking tape—and just get the ticks off the flag and then come back to the lab and painstakingly rip off each tick from the tape,” Leu said. “Then we realized that takes way too long.” 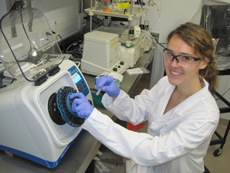 The tape-bound ticks also dry out, becoming virtually useless. “The tricky part,” Kerscher said, “is preserving the DNA.” He suggested taking vials of a 70 percent ethanol solution into the field. It’s the liquid he uses to kill and preserve yeast in his lab. A field-to-lab protocol evolved, in which the tick wranglers used fine tweezers to pluck ticks from the flag and then place them into a cryogenic vial that contains Kerscher’s 70 percent ethanol solution.

It’s ironic what happens to the ticks back in Kerscher’s lab when you consider the care with which the bugs are transferred. Weeks transfers individual ticks into “bead beater” vials. Kerscher usually uses the bead beater to grind notoriously tough yeast cells. Anyone who has ever tried to crush a tick knows how hard it is to defeat that chitinous exoskeleton. Kersher’s bead beater works just as well on ticks.

“The bead beater is essentially a machine that shakes the tick inside a vial with small glass beads,” Weeks explained. “You end up with tick pulp.”

Once a tick has been pulped, the molecular biology can begin in earnest. Using the polymerase chain reaction, Weeks examined the DNA of the ticks as well as any pathogens they carried. Weeks was only interested in the lone star tick, and so she needed to sort out other species. DNA analysis helped because most of the ticks captured were nymphs, immature pinhead-sized specimens that are difficult to identify visually.

Weeks and her collaborator Matt Feresten were able to analyze the field data to figure out where the ticks were thickest and why. Her team of tick wranglers collected ticks from 101 points on the Peninsula, from Richmond down to Hampton. Using techniques they learned in Leu’s Geographical Information System class, Weeks mapped out tick density across the Peninsula.

Secondly, there are a number of contributing factors for the increase in ticks, including the proportion of damp oak forest and the amount of “edge” buffering the ticky oak woods and nearby habitat. One of the strongest predictors is the presence of deer. The field notes recorded at the collection site included the presence or absence of deer pellets in each transect. Where they found signs of deer, there were more ticks. Weeks says she wasn’t surprised by the deer-tick connection.

“From about 1970 to now, the tick populations on the East Coast have been on a pretty significant rise,” Weeks explained. “That rise mirrors almost exactly the rise in population of white tailed deer.”

There are some equally sobering implications, too. For one thing, Weeks says that she suspects that more adult lone star ticks carry HME than the population she sampled, which were nymphs—immature ticks. Further, like Lyme, HME displays flu-like symptoms. HME is easily treated in the early stages. But HME responds to doxycycline, an antibiotic not usually prescribed for Lyme. Leu and Kerscher wonder about the degree to which HME is misdiagnosed as Lyme.

“There’s one paper out that says that Lyme disease actually is over diagnosed,” Leu said. “People who are getting bit by lone star ticks and developing that rash automatically are treated for Lyme disease—when in fact it is not Lyme disease.”

Leu says that Weeks’ study, and others like it, reinforces the need for management of deer population and careful planning of housing developments to minimize human exposure to HME and other tick-borne diseases.

This story appeared in the summer, 2013 issue of the William & Mary Alumni Magazine.