The 2011 loss of Goshen and Machi, two whimbrels included in the Center for Conservation Biology’s tracking project, to hunters near Port-Louis, Guadeloupe, was a watershed event for shorebird scientists. The event forced researchers and government officials to consider the real possibility that hunting within the West Indies and the northern coast of South America may be playing a significant role in observed population declines. 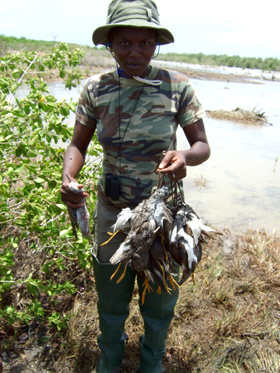 The key issue is whether or not current harvest levels within the region are above sustainable limits. The Center for Conservation Biology has received a grant award from the U.S. Fish and Wildlife Service to estimate sustainable mortality limits for shorebird populations, a first step in understanding this complex relationship and setting harvest limits.

Over the past few decades a large portion of the more than 30 shorebird species migrating along the Atlantic Flyway have declined. The underlying cause or causes of these declines are poorly understood. However, the fact that some of these populations breed in different locations, depend on different resources, and have varied winter ranges argues for either a long list of species-specific causes acting in concert or some overarching, broad-based cause.

From a cursory survey of biologists within this region in 2010, it was determined that considerable hunting pressure exists at least on Guadeloupe, Martinique, Barbados, Puerto Rico, and Trinidad and Tobago, as well as in other jurisdictions within South America. The collective, annual harvest of passage shorebirds throughout the Caribbean Basin and the northern coast of South America appears to be in range of 200,000.

A considerable amount of work is currently needed to quantify harvest pressure and to understand hunting policy for jurisdictions within the flyway. However, even if we had a complete understanding of current harvest rates for all species, we would be in no position to evaluate the population-level consequences of such harvest.

The joint CCB-FWS project will estimate sustainable mortality limits that will, for the first time, allow for the assessment of population-level consequences that result from mortality sources whether due to hunting, wind turbines, oil spills or other sources. Such estimates are critically important when evaluating hunting policy or assessing mortality from other sources on a flyway scale.

The Center for Conservation Biology is a joint program of William & Mary and Virginia Commonwealth University.