Photo - of -
by Joseph McClain |  June 30, 2009
Lizabeth Allison, professor of biology at William & Mary, has just received $204,105 in funding from the National Institutes of Health to continue her research on intracellular nuclear transport, a hot topic in basic biomedical science that has potential clinical applications for such cell-based maladies as cancer and thyroid hormone disorders.

The grant was announced through the office of Congressman Rob Wittman of Virginia’s 1st District. Allison’s lab has had continuous funding for this work since 2001—from the National Science Foundation as well as from NIH.

“Nuclear,” in this case, refers to the cell’s nucleus, where genetic information 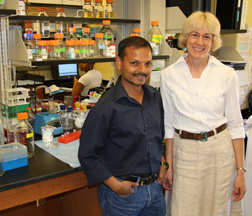 “Our interest is in how this protein gets to where it needs to be in order to function and, in certain disease situations, how is it mislocalized,” Allison said. “The thyroid hormone receptor is made in the cytoplasm—that’s where proteins are synthesized—and it needs to go into the nucleus to interact with the DNA and to regulate particular genes.”

“It doesn’t just go in and stay there and bind to DNA and regulate genes like everyone had thought for decades. It shuttles between the nucleus and the cytoplasm,” she explained. “We still don’t really understand the physiological significance of that, but it means that we started looking for mechanisms about how it gets into the nucleus and then we discovered we also had to study how it gets out.”

Allison’s study of intracellular “traffic control” is important to the greater understanding of how a number of DNA-related diseases work. She explained that some cancer cells, for instance, show that they have more of the thyroid hormone receptor in the cytoplasm, as opposed to the nucleus.

“So if you have something wrong with the import and export properties of the thyroid hormone receptor—then it can end up mostly in the cytoplasm, which means of course that it can’t function,” she said.