Jennifer Kahn was doing archaeological work on the Polynesian island of Maupiti when she and her students were drafted into a fishing crew.

“The Hokulea was coming,” she explained. “And it was a really big deal. I mean, the whole island had festivities. When the canoes entered, there was this huge welcoming ceremony with dance groups and music.”

The islanders wanted to mark the arrival of the traditional double-hulled oceangoing canoe with a demonstration of their centuries-old fishing technique.

“Everybody participates,” Kahn said. And Maupiti is small enough that “everybody” means archaeologists and, of course, the crew of the Hokulea. She and her students found themselves in a boat offshore, part of a flotilla driving fish towards shallow water, participants in an ancient, effective and sustainable method of fishing that is also part of the traditional culture of the island.

Kahn is the Robert & Sara Boyd Associate Professor in William & Mary’s Department of Anthropology. She is part of a research collective called Sea Gardens Across the Pacific, examining cultural aspects of indigenous fishing techniques. She has studied traditional fishing methods on Maupiti and elsewhere in the Society Islands. It’s part of a larger study of human-environmental interactions, especially in Oceania, and Kahn's findings will be contained in a forthcoming book, Fare and Fenua, Marae and Mana, Social Complexity in the Society Islands, or “Houses and Land, Temples and Sacred Power.”

Kahn has studied a number of fishing methods in the islands. Some are still practiced, although modern materials are used. On Maupiti, the islanders practice a form of fish herding known as “stone fishing.” The practice is much the same as what their ancestors have done, even down to the use of traditional materials. 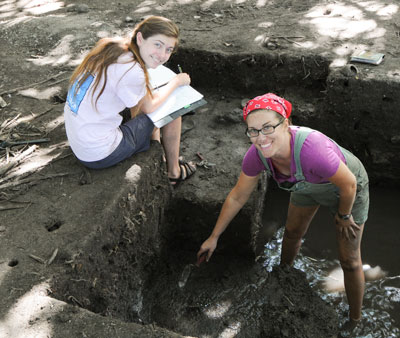 “Everybody in the village has to make these large organic panels,” Kahn said. “They make these panels out of knotted coconut fronds and other things like pandanus. They’re these big, organic mats that are probably like four to five feet high.”

One group of islanders wades out with the mats and waits for the fish. The other group of islanders go out in boats and drive the fish in to shallow water. Kahn and her students were assigned to a boat and each was issued a stone on a rope.

“And you fling the stone into the water,” she said. “You’re basically herding the fish into a fish trap.”

The hullaballoo of dozens of islanders flinging and retrieving their stones alarms the fish, sending them shoreward, to be trapped by other islanders wielding those coconut-and-pandanus mats. She pointed out that the islanders make their mats in the old-school way, using traditional organic materials. And, Kahn said Maupiti is a very small island, making a stone-fishing day is an event for the entire society.

“The entire community is expected to take part,” she said. “There is a lot of peer pressure. People were talking smack about the families who hadn’t made enough of those mats. It was the gossip of the week.”

‘You had to be watermen. And waterwomen.’

Kahn has done most of her research on Mo’orea, an island next to Tahiti. She said the inhabitants of Mo’orea, Tahiti, Maupiti and other islands of the group call themselves Māʻohi, essentially descendants of the people who first colonized the islands around the 11th century A.D., or even before.

“And to colonize the islands, you had to be watermen, right? Watermen and waterwomen, because this was a sail of two to three weeks by traditional double-outrigger canoes, probably from Samoa or Tonga,” she said.

Kahn stressed that the Māʻohi were not just watermen and waterwomen. They loaded their colonizing canoes with pigs, dogs and chickens as well as cuttings and seeds for food crops.

“But they’re very much surviving from marine resources, especially in the early periods,” she said. “Because your taro and your breadfruit take a while to get up and going. So you’re relying heavily on fish, shellfish and birds.”

Kahn worked on a rich archaeological site on Mo’orea, dating from around 1000 A.D. — the time of colonization — to the historic period. It’s what archaeologists call a multicomponent site, meaning it contains features and artifacts associated with more than one human occupation.

“And we got a lot of fish bones out of that site, as well as fishhooks and broken pieces of shell showing that fishhook manufacturing was a really big deal at this site,” she said. Kahn added that Sir Joseph Banks, the naturalist on Capt. James Cook’s voyage through the islands, once watched a Māʻohi man make a fishhook from a shell. 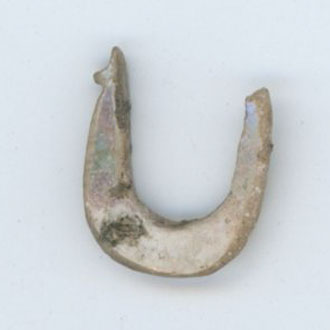 Kahn said that when Europeans introduced iron nails, the Māʻohi immediately saw they could easily bend a nail into an excellent fishhook in much less time.

“So shell fishhooks, as a practice, really drops out right away,” she said. “So we have very little understanding of who made them.”

The Māʻohi used different shells for different purposes. Hooks were fashioned from bivalves such as pearl shell and univalves such as turbo. The middens of Mo’orea yielded up a large quantity of turbo shells, but both turbo and pearlshell were used to fashion fishhooks.

“Some of those turbo shells had damage on them,” Kahn said. “It looked like they were being used as scrapers.”

Kahn had a specialist analyze the shells for phytoliths — silica secretions of plants that persist long after the plant has decayed. It turned out that the turbo shells had been used to scrape a pandanus-like vine known as Ie’Ie’.

“It has a thick root,” she explained. “And inside the root, if you scrape off the outer part, there’s this woody reed on the inside. And that is what the specialist found on the turbo shells. And interestingly enough, when I looked at the archival documents, they said these fish traps made from reeds were actually made from Ie’Ie’.”

The fish trap designs would be familiar to any indigenous person living in a watery world, and identical in principle to the crab pots of Chesapeake Bay watermen: basically a basket with an inward-leading funnel. Probably baited.

“Fish aren’t all that smart,” Kahn said. “They swim in the funnel, and they kind of go around in circles because they can’t figure out how to get out.”

More than one way to catch a fish

Kahn has studied other indigenous/traditional fishing practices in the islands. For instance, there is the hutu reva, or fish-poison tree. Islanders take the nut and grind it up. The mash stuns the fish, which float up to be scooped up off the surface.

Another traditional practice Kahn has seen is the construction of large fish-trapping weirs in strategic spots. Away from the ocean, there are structures that extend partway across rivers — in riverine parts of the U.S. they would be called wing dams. The dams are tended as floodwaters recede, the islanders netting up freshwater shrimp and eels.

“I’ve eaten the shrimp — and they are delicious,” she said. “But not the eels.”

Evidence from the middens reveal that the islanders have targeted coral reef dwellers such as parrotfish and also pelagic species — the open-water swimmers that include tuna and mahi mahi. Interestingly, she has found the reef-to-pelagic ratio increasingly tilts in favor of reef fish in more recent layers.

Her excavation has turned up copious remains of spiny puffer fish, a reef dweller that’s still a popular food fish on Mo’orea.

“I talked to some of the fishermen who were working at the site with me, and they said there's a period during the year when the spiny puffer fish migrate into the lagoon and everybody catches them, because they're really easy to catch then,” she said. “So I think that's why I have a plethora of spiny puffer fish at this site.”

Kahn said the puffers are the same species that yields the infamous Japanese delicacy known as fugu. It requires careful preparation to remove a poisonous bit of the fish anatomy, “and even then, you’re rolling the dice,” she said.

Fish and fishing in the island power structure

Kahn stresses that fish and fishing methods comprise a little-understood strand of the complex web that made up the society of the Society Islands. Her next book will compare the anthropology of Tahiti, Mo’orea and the other Societies to the Hawaiian Islands, which have been subject to more extensive studies. It makes sense, she says, to consider that fish and fishing fit into the Society Islands power structure much as they did in the Hawaiian Islands.

“The Hawaiian Islands had fish traps all over the place,” Kahn said. “And people argue that the very large fish traps were supported by the chiefs. They could have used the fish captured as another form of tribute, but also for having lots of food for warriors. Economic control in other words.”