It’s easy for people to indulge during the holiday season, adding up to 3,000 calories to just one meal, according to Julie Nance.

“Not the entire day — just one meal,” she said.

Nance, William & Mary’s campus dietitian, has been leading workshops on healthy eating for members of the university community throughout the fall semester, including sessions on healthy holiday eating.

While parties can be challenging, Nance said that finding out beforehand what’s going to be served will allow you to plan.

“If there’s nothing that’s healthy that you want to eat, you can always offer to bring something with you,” she said.

Nance’s other tips for holiday parties include:

If family members or friends tend to push you to indulge, Nance suggests declining with a compliment.

“Grandma might put a little extra on the plate, but it doesn’t necessarily mean you have to eat it,” she said. “Maybe say, ‘I’m so stuffed! It was so delicious! I’m really so, full, I can’t eat anymore.’”

People sometimes try to prepare for holiday parties by not eating earlier in the day, Nance said, but that often leads to overeating. 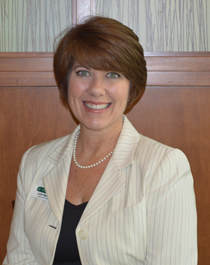 I typically recommend, don’t skip meals. Eat breakfast; eat lunch, and you’re less likely to be ready to eat so much at that next meal, especially if it’s a party that you’re going to.”

For people who enjoy going to restaurants during the holidays, Nance suggest avoiding foods with excess cheese or gravy.

“One of the best things, I always say, is ask for any kinds of sauces or gravies and especially salad dressing on the side because that way you can control how much goes on it,” she said, adding that restaurants will often use a quarter cup or more of dressing on a salad.

“Use your fork to dip into the dressing first and then stab your lettuce,” she said. “It’s a little bit easier that way.”

Nance has similar advice when it comes to side dishes, saying to go for the baked potato – just not the loaded baked potato.

“Get your butter and your sour cream on the side and that way you can control how much goes on it,” she said. “It actually tastes pretty great just plain. I know a lot of people think that’s weird, but I like baked potatoes perfectly plain. Sweet potatoes are a great option, too.”

Alcohol can be a significant source of extra calories during the holidays especially if it’s added to drinks such as eggnog, which already has 230 to 250 calories and 10-20 grams of fat per serving size, Nance said. The recommended serving of alcohol is no more than two drinks per day for men and no more than one for women, she added.

“A serving size for wine is about 5 ounces, that’s a little bit more than half a cup, so not very much,” she said. “For liquor or any of the whiskey, it is a shot-glass size, and for beer it’s 12 ounces and that’s for any beer. That doesn’t mean though that if you don’t drink Monday through Thursday, on Friday you can accrue and have five extra drinks. If you don’t use it, you lose it. But you want to keep in mind the actual recommended serving sizes because we always recommend alcohol in moderation.”

Students at W&M have shown a strong interest in healthy eating, said Nance, and W&M Dining Services offers an app to allow them to make informed decisions about their food choices, including vegan, vegetarian and gluten-free options. Nance is available to meet with students who have meal plans throughout the year by appointment, and she will continue offering workshops to the rest of the campus community in the spring.

A fan of pizza and the occasional slice of red velvet cake, Nance says that healthy eating both during the holidays and beyond is all about balance.