Following her lecture on Sept. 28, Harris was presented with an award in honor of her historic role at W&M by members of the committee for the 50th anniversary commemoration of the university’s first African-American residential students. 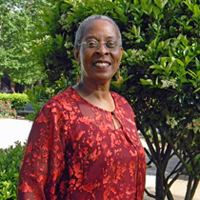 In the 2017-2018 academic year, W&M is hosting a series of events as part of the “Building the Legacy” commemoration, which seeks to honor the African-American community at the university, past and present.

“When I taught at the College of William & Mary between 1973 and 1979, I was 100 percent of the African-American faculty,” Harris said. “Though I was welcomed warmly, clearly that situation needed to change.

“It is a testament to the tireless efforts of many good people that, at this 50th anniversary marker of African-American student presence at William & Mary, African-Americans now constitute a significant percentage of faculty, students and staff.”

Harris received her undergraduate degree from Stillman College and her master’s and doctoral degrees from the Ohio State University.

She has written or edited nearly two dozen books, including The Concise Oxford Companion to African American Literature, and she has received multiple honors and awards for her scholarly work and teaching.

“Dr. Harris is an internationally recognized scholar in the field of African-American literary history and culture,” said Jacqui McLendon, chair of the 50th anniversary committee and professor of English, emerita. “Her return to the university where she began her career was an honor for us and greatly significant during this commemoration of ‘firsts’ — a truly historical moment for William & Mary.”

The 50th anniversary commemoration began in August when a mural was unveiled in Swem Library in honor of the university’s first African-American residential students — Lynn Briley, Janet Brown Strafer and Karen Ely — who arrived at William & Mary as freshmen in 1967.

The three alumnae participated in this year’s Opening Convocation ceremony and will be back on campus during Homecoming when they will serve as the parade’s grand marshals.

More information about the 50th anniversary commemoration is available online.