Surrounded by paintings of royals and founding fathers, Michael Blakey stood at a podium in the Great Hall Thursday and called attention to those people whose portraits were never painted but who built the very foundations of William & Mary.

“One can assume that the people who made every brick in this place and who laid them … were the people who slept in the basement of this building,” said Blakey, National Endowment for the Humanities Professor of Anthropology and American Studies. 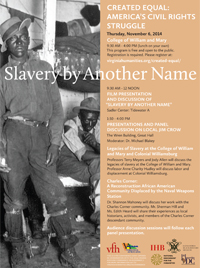 The history of those enslaved people and the ongoing impact of slavery through the Jim Crow era and beyond were discussed as part of an all-day event at the university Nov. 6 titled, “Created Equal: Slavery by Another Name.” Sponsored by Virginia Foundation for the Humanities, African American Programs; the Remembering Slavery, Resistance and Freedom Project; the Alexandria Black History Museum; and the Humanities Council of Washington, D.C., the event featured presentations from William & Mary faculty members Jody Allen, Ph.D. '07, Terry Meyers and Anne Charity Hudley; alumna Shannon Mahoney, Ph.D. ’13; and community members and researchers Edith Heard and Sherman Hill.

Dozens of faculty, staff, students and community members attended the event, which began Thursday morning in the Sadler Center with a screening of the PBS documentary Slavery by Another Name. A discussion followed the screening and included a conversation about the demographics of William & Mary. Faculty members in attendance acknowledged that while the student body has become significantly more diverse in recent years, the faculty still has a long way to go, said Blakey.

Thursday afternoon, the participants reconvened in the Great Hall of the Wren Building for a series of short presentations and discussions. Allen and Meyers discussed the history of William & Mary. Hudley, associate professor of education, English and linguistics, talked about labor and displacement in Colonial Williamsburg. Displacement was also at the center of Mahoney’s, Heard’s and Hill’s presentations, which focused on the Charles Corner and Uniontown (or Slabtown) communities in Yorktown that were forced to move by the federal government.

The Wren Building seemed an appropriate place to have those discussions, said Blakey, adding that one of the university’s most noted alumni – Thomas Jefferson – embodied the “defining American paradox.”

“People who believed in higher ideals of freedom chose to construct a society in which they took the labor from African Americans and Native Americans for their own exclusive privilege,” he said. 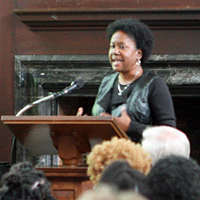 Allen, visiting assistant professor of history and managing director of the Lemon Project, offered an overview of William & Mary’s history with slavery, including its use of enslaved people to build the College. William & Mary also owned a plantation, Nottoway Quarter, on which 17 enslaved people worked, growing mostly tobacco, in order to fund scholarships at the College.

Thomas Roderick Dew, the College’s president from 1836-1846, was “considered a guiding light in the pro-slavery debate,” said Allen. “He is another reason that William & Mary is well-known in terms of its role as a slave-holder.”

A century later, another man who would become president of William & Mary, Davis Young Paschall, served as the superintendent of public instruction for the Commonwealth during Massive Resistance, an effort against desegregation in Virginia public schools.

“One of the things that was so true during the Jim Crow period is we see these awful laws, but I also see resiliency in the African-American community,” said Allen.

Although the university’s history is fraught with examples of “deeply racist thinking,” there were simultaneous countercurrents, noted Meyers, Chancellor Professor of English.

“Things are always more complicated than they seem,” he said.

For example, take the Ku Klux Klan flagpole that the university received in 1926.

“Accepting that gift did not do the College proud, but the story is complicated and shot through with ironies,” said Meyers.

J.A.C. Chandler, William & Mary’s president at the time, felt that he could not refuse a patriotic gift from a legally recognized body, said Meyers. Chandler had recently allowed Catholics to start having mass in the Wren Chapel, and he felt that the KKK was testing his liberalism. The flagpole and its benches were installed at College Corner, and more than 5,000 Klansmen from across the state gathered at William & Mary for the dedication ceremony.

“In the end, Chandler’s response may have soured the plans that the Klan had put in place,” said Meyers.

Following an address by one of the Klan’s imperial grand wizards, Chandler stood up to speak. Pointing at some of the country’s founding documents, he extolled the values of equality and acceptance and ended his speech wishing that any person who saw the flagpole would “be so impressed that he has toward his fellow citizens a spirit of tolerance, charity … and Christian forbearance.”

A professor who attended the event noted that Chandler’s speech was a “marvel of adroitness and diplomacy full of veiled thrusts at the members of the KKK, thrusts that they did not understand but the William & Mary people did,” Meyers said.

The flagpole eventually became a target for student vandalism, and its benches – which had been put in place so that passersby could “sit and contemplate the present, past and future glories of white Virginia” – were used often by African-American staff members at the College, while waiting for the bus, said Meyers. The flagpole was cut down and was moved around campus – first to James Blair Hall to fly the Virginia flag during Massive Resistance and, later, to the W&M Law School. Its current location is unknown, said Meyers.

President Taylor Reveley praised the presenters for their work in helping to build the history of William & Mary and its surrounding communities. 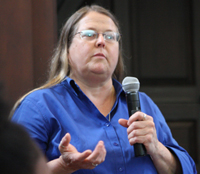 “One of the great challenges for all American colleges and universities that have any age on them, particularly those in the South but certainly not only those in the South, is to come to grips with a past of slavery, segregation and its continuing impact,” he said.

But doing that is not easy in part because the historical record is “so skimpy,” he added. However, that is changing at William & Mary largely due to the efforts of the Lemon Project, a long-term research project which was charged by the Board of Visitors “to better understand, chronicle, and preserve the history of blacks at the College and in the community and to promote a deeper understanding of the indebtedness of the College to the work and support of its diverse neighbors.”

Since 2009, the project has sponsored multiple research projects, classes and events. This semester, students in a Lemon Project course, "Memorializing the Enslaved," co-taught by Allen and Instructor of Architectural Design Ed Pease began exploring how the Africans and African Americans who helped build and maintain William & Mary throughout the years might be memorialized on campus. The class hosted an open conversation on that topic Nov. 11 in the Great Hall, attended by faculty, staff and students as well as community members.

The work of the Lemon Project is important, because it’s building William & Mary’s record in ways it has not been built before, said Reveley.

“Because until you really understand the reality of the past, it’s difficult to learn as much from it as you need to learn and, then, do anything about it.”