William & Mary’s Lemon Project was recently lauded by the College’s chapter of the NAACP.

The project, which is charged with exploring the College's past ties to slavery and to exclusionary Jim Crow practices, was named Community Organization of the Year by the William & Mary group. Project Coordinator Jody Allen accepted the award during the NAACP’s Image Awards reception at the Sadler Center on April 24.

“It is a great honor to receive the Image Award from the student chapter of the NAACP,” said Allen. “Our students are our most important constituency, and their recognition of our efforts to inspire a better community is humbling. “

The Image Awards are presented annually to “celebrate the efforts and accomplishments of students, staff, faculty and local community groups who strive to build bridges across lines of difference and foster a truly inclusive community." The William & Mary Department of History also received an award at the event for its support of the Lemon Project.

Launched in 2009, the Lemon Project is a long-term research effort. Earlier this year, the project hosted a symposium titled “From Slavery Toward Reconciliation: African Americans & The College.” More than 100 students, faculty, staff and community members attended the day-long event. 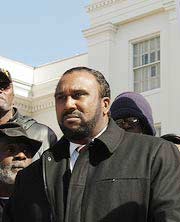 This week, the project is co-sponsoring a lecture by John Boyd, president of the National Black Farmers Association. The lecture, titled “A Hard Row to Hoe for Justice: The decades-long struggle of Black Farmers against discrimination by the U.S. Dept. of Agriculture," will take place at 7 p.m. April 27 in Andrew Hall, room 101. The event is free and open to the public.

Additionally this week, the exhibit “The World of Henry Billups” will open in Swem Library’s third-floor rotunda. The exhibit was curated by students in a class of the same name, taught by Allen and co-sponsored by the Lemon Project. Billups was a laborer at the College from 1888 to 1955. The exhibit, which opens with a reception at 4 p.m. April 28, includes documents and other items related to him as well as the world of segregation and Jim Crow that he lived in.

The award and upcoming events wrap up a busy first year for the project.

"The NAACP Image Award given to the Lemon Project continues a successful semester in which the project has gotten national media attention from the Washington Post, the Chronicle of Higher Education and local television show Another View, for its continuing historical work on the College and slavery, the Bray School, which is the oldest school for religious education of blacks in America, the Maggie Lena Walker papers and the desegregation of Virginia schools,” said Robert Vinson, associate professor of history and Lemon Initiatives co-chair.

“We have built wonderful partnerships with local community members and organizations through the recent community symposium, the upcoming John Boyd lecture and we are proud of our faculty-student research, exemplified by the upcoming Henry Billups exhibit,” he said. “But the most exciting thing is that we have only just completed our first year, and we are just getting started with a very ambitious agenda over the next few years."