Along with the recent commemoration of 50 years of African-Americans in residence and current celebration of 100 years of coeducation, William & Mary has been working closely with the Lemon Project to foster a different kind of commemoration: recognizing the enslaved people who helped build and maintain the university in its earliest years.

Through several different efforts, including panel discussions, symposiums, honorary degree recognitions and more, the Lemon Project has made a significant effort in revealing the history of the university’s use of slave labor. On Sept. 25, as part of the Lemon's Legacies Porch Talks, about 50 members of the William & Mary and Williamsburg communities gathered in the Chesapeake C room of the Sadler Center for an open forum about proposals for a memorial to the African-Americans enslaved by the university.

The university announced Aug. 28 a competition to solicit ideas for conceptual designs for a memorial. Submissions are due by 5 p.m. on Oct. 12. A jury of noted museum, arts and history professionals will select three ideas and submit them unranked to W&M President Katherine A. Rowe. She will then review each and determine if one is ready to be shared with the William & Mary Board of Visitors during its February 2019 meeting.

“This memorial is such an important project for our community,” said Rowe in a press release announcing the competition. “African-Americans have been vital to William & Mary since its earliest days. Even as they suffered under slavery, African-Americans helped establish the university and subsequently maintained it.

“A physical memorial to the enslaved will be a critical addition to our campus landscape. It will allow us to continue to learn of their contributions and remember them — for all time coming. I am thankful for work by so many that has gotten us to this point and I look forward to seeing the submitted concepts.” 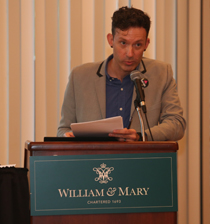 “Our students were coming to us with questions, so we developed courses that equip our students with the skills to join that conversation,” said Watkins.

Watkins’ brief history of Civil War conflict and its impact on William & Mary and Virginia’s discourse on slavery created an extensive basis for Allen and the Lemon Project to enter with its mission for a memorial.

“We’ve been working towards this monumental moment for several years,” said Allen.

Allen’s request for ideas from students, faculty, staff and members of the Williamsburg community was met with diverse yet passionate answers.

Many community members, some of whom have deep emotional connections to this cause, offered ideas including a water feature, a statue and an open space for black organizations — both from William & Mary and the surrounding community — to gather and host events.

“A number of productive conversations have resulted from this,” said Watkins.

For more information on the competition or to submit an idea, visit the memorial website.