Mark Kostro stood in the back yard of Brown Hall, looking down at a hole in the ground.

Even at a glance, the hole was different from the other features investigated by the students and professional archaeologists who were spending a second summer working behind the William & Mary residence hall in a quest to find archaeological evidence of the Bray School, the 18th-century institution established for the education of free and enslaved black children.

The 18th-century features exposed by the summer archaeological field school are all square and orderly, paralleling Brown Hall and Prince George Street. Such orderly alignment is found in digs throughout Williamsburg, says Kostro, a Ph.D. student in William & Mary’s Department of Anthropology and an archaeologist with the Colonial Williamsburg Department of Architectural and Archaeological Research.

Kostro added that the pit not only predates the 1760 founding of the Bray School, but also is older than Williamsburg itself, dating to a time in which the area was merely a crossroads between the York and the James rivers.

“Williamsburg was founded in 1699 and at that point they laid out all the city streets and lots, oriented on a north-south, east-west Cartesian grid. Everything built after 1699 would conform to this grid,” he said. “The hole that we’re looking at does not conform to that grid. That’s why I think that this feature predates 1699 and therefore the founding of Williamsburg. It’s a Middle Plantation feature, in other words.”

Kostro said the hole likely was a root cellar or food storage pit. Typically, such features are found in association with the remains of hearths, he added, but the pit behind Brown Hall stands alone, archaeologically. He said that evidence indicates that the pit was probably left open for years, slowly filling in naturally through erosion.

“After a long period of time, this three-foot pit became just a shallow depression,” he said. Only the top three to four inches held artifacts, all of which are from the early 18th century. The artifacts include the typical early Colonial refuse—animal bone, oyster shell and fragments of German westerwald and English salt-glazed stoneware. Kostro said that the pottery allows the archaeologists to date the feature. 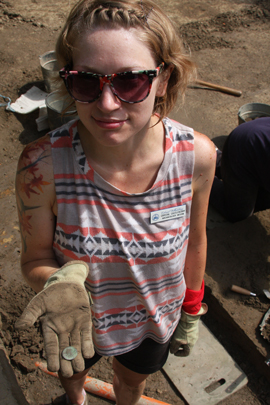 “The English salt-glazed stoneware is particularly diagnostic because it was first manufactured around 1720,” he explained.

The annual field schools are a collaboration of William & Mary and the Colonial Williamsburg Foundation and have been conducted by Kostro and Neil Norman, assistant professor of anthropology at William & Mary. This summer’s field school was a continuation of work from last year. One of the goals is to find what the archaeologists have come to call the “smoking lunchbox”—archaeological evidence that would verify a thesis that the Bray School building is still standing.

Terry Meyers, Chancellor Professor of English, compiled evidence that the Bray School was first operated in a building known as the Digges House, which stood on the site now occupied by Brown Hall. His research shows that the Digges House was the core of a building that was moved down Prince George Street in 1930. The building is now known as Prince George House and houses William & Mary’s ROTC program.

Meyers’ research shows the genesis of the Bray School, established on the recommendation of no less a personage than Benjamin Franklin and affiliated with William & Mary. He believes that the Digges House was depicted on the 1782 Frenchman’s Map, a document set up to facilitate the quartering of French troops after the battle of Yorktown.

Both Kostro and Norman accept Meyers’ documentary evidence that places the Bray School on the site now occupied by Brown Hall. They can’t yet endorse the entire thesis because the Frenchman’s Map shows that the present Brown Hall site held two structures in 1782. Either one could have been the original home of the Bray School. Or, the school may have been housed in a third building, one that had been torn down by the time the Frenchman made his map.

The field school participants were hoping to verify Meyers’ thesis: If he is correct, it means that the oldest extant building used for education of African Americans remains standing in Williamsburg. The findings of the 2013 field school were consistent with the site of an 18th century school. The tens of thousands of artifacts recovered this summer include straight pins, buttons and other sewing-related items. Meyers’ research shows that sewing was among the skills proposed for study in the Bray School.

Meyers is also co-chair of the Lemon Project, a initiative dedicated to exploring William & Mary’s history of race relations, from slavery days through the Jim Crow period and up to the present. Meyers gave the field school students some background on the Bray School through his presentation “William and Mary, Slavery, and Memory.”

“The Bray School is mentioned in no College history,” Meyers told the students. He added that much of William & Mary’s race-related history was lost during the revisionist attitudes during the “moonlight and magnolias” period in the decades following the Civil War.

Meyers argues that the College’s relationship with slavery is a complex matter. One end of the spectrum is represented by writings on the subject by President Thomas Roderick Dew and his faculty, work that Meyers terms “horrific.”At the other end is evidence of skepticism about slavery among faculty and students in the second half of the 18th century. The Lemon Project takes its name from an enslaved individual who worked at William & Mary, yet the College granted an honorary degree in 1791 to Granville Sharp, a man whom Meyers calls “England’s most famous abolitionist.”

Just as was the case in the 2012 field school, the 2013 dig produced clay marbles and slate pencils. These schoolyard items are common artifacts in Williamsburg archaeology, but Kostro says they seem to be in greater profusion around Brown Hall.

“We haven’t found the ‘smoking lunchbox’ yet,” Kostro said, “but what we’ve found, taken all together, might add up to the lid to the thermos.”

Kostro stressed that beyond testing Meyers’ thesis, the Brown Hall work will provide valuable insights into the life of free and enslaved African American children of the period. He said that archaeological evidence is especially important to flesh out the historical record of the Bray School.

“This is where artifacts such as the slate pencils and marbles and sewing-related items will have their greatest value,” he said. “But we won’t be able to fully appreciate the value until we can complete the artifact identification process.”

Kostro said that the 17th century pit, identified in the last few days of the summer field school, likely represents an earlier chapter in the African American story that played out on the same piece of ground that decades later, would be the site of the Bray School.

“Very often, pits like this are associated with enslaved Africans, with plantation slave quarters. I think it’s very possible that this is what this feature is,” he said, looking up from the pit. “This is a big deal.”