Archaeological work around William & Mary’s Brown Hall is bringing to light artifacts dating back to the early 18th century, including a few items that just might be relics from the Bray School, an 18th century institution dedicated to the education of free and enslaved black children. 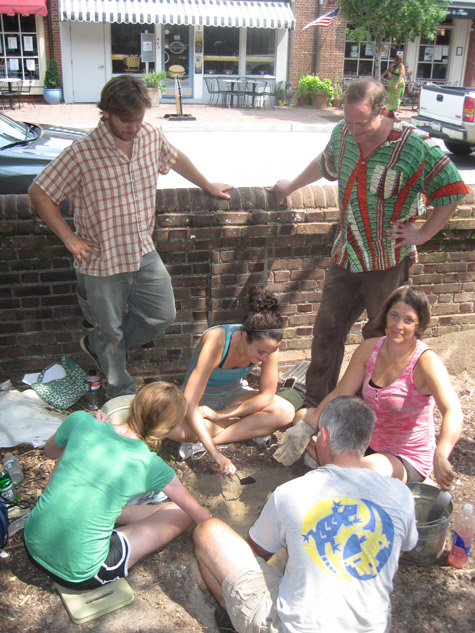 Students enrolled in summer field schools jointly sponsored by William & Mary and the Colonial Williamsburg Foundation are conducting the dig. They’re searching for any archaeological evidence that might support a professor’s theory that the Brown Hall site was the original location of the Bray School.

The hundreds of pounds of artifacts extracted from the site include pieces of slate pencils and fragments of slate that could have been used for writing exercises by Bray School students.

“That’s not much to build a school on,” said Terry Meyers, “but I’m going to try!”

Meyers, Chancellor Professor of English at William & Mary, has amassed considerable scholarship pointing to the Brown Hall site as the original location of the Bray School, a charitable enterprise founded in 1760 with the support of Benjamin Franklin. His evidence indicates that the Bray School was operated from the Dudley Digges house, a structure that originally stood where Brown Hall is today. The original Digges house, much changed after centuries of renovations and additions, still stands. It was moved to another location on campus to clear a space for the 1930 construction of Brown Hall.

Field school supervisors Neil Norman and Mark Kostro urge caution in connecting artifacts to the Bray School at this point in the investigation. Norman, assistant professor of anthropology at William & Mary, notes that the slate fragments might easily be roofing material.

“We found a half a dozen fragments of slate pencils,” added Kostro, an archaeologist with the Colonial Williamsburg Department of Archaeological Research. “They are relatively common 18th century-artifacts. We should be cautious about saying anything about these, because we find them at almost every site.”

The field schools are held each summer, give students from William & Mary and other colleges and universities an introduction to archaeological field and lab techniques. Typically, two sessions are offered each summer. This year’s first field school session, which began on May 29, concentrated on the area behind Brown Hall. The second section of the field school, starting July 2, expanded the work to the front of Brown, in the area behind the brick wall along Prince George Street. The area behind Brown Hall brought to light a set of architectural features, including a set of postholes that could represent a property line or outbuildings.

They're extracting and processing items from three centuries of occupation of the site. Much of the material is representative of Brown Hall’s eight decades as a William and Mary dormitory.

Norman says the bulk of the artifacts are ceramic and glass fragments, both common finds in Colonial-era archaeology. Field school students are assisting in the washing and cataloging of the artifacts. “The cataloging always runs a couple of weeks behind the field work,” he adds.

Kostro notes that all artifacts recovered to date have been from what archaeologists term “disturbed contexts,” meaning that the soil has been disturbed by construction or plowing and the relics have been mixed, rather than resting in layers with the oldest artifacts deepest. The next stage of the field school will move to a relatively undisturbed portion of the site.

“The features that we’re going to be excavating over the next few weeks are going to be the places where the artifacts play a very important role,” he explained. “We’re really looking forward to excavating these features and recovering artifacts that we know date to when the site was being occupied.”

Meyers says he has been visiting the dig a couple times each week and looks forward to hearing about each find. “ I think that it’s just tremendously exciting to watch. The students are so good and so patient,” he said. “They’re out there slogging away in that heat and that humidity, yet they always seem to be of good cheer and spirit.”