The history of William & Mary etched on the walls of the Wren Building will finally include two groups of people who have been essential to the success of the institution — but largely invisible — since its founding 325 years ago.

Two plaques, one honoring African-Americans and the other recognizing women, were unveiled and dedicated Thursday afternoon during a ceremony held at what many consider the most important building on campus.

“By the plaques on the wall on the Wren just erected, we are recognizing the role of African-Americans and of women over the vast sweep of William & Mary’s history,” said W&M President Taylor Reveley. “They played significant parts since the beginning. The parts they will play going forward will only continue to grow.

“Indeed, for William & Mary to thrive in this century and succeeding centuries, the parts played by African-Americans and women at William & Mary must not just continue to grow. They must grow robustly, vibrantly. It’s good and long overdue that we are here today.”

{{youtube:medium:left|0ooyKf8wSAE, Highlights from the ceremony}}

The ceremony marked a center point between two yearlong commemorations at the university. During the 2017-18 academic year, the university has been commemorating the 50th anniversary of its first African-American students in residence: Lynn Briley, Karen Ely and Janet Brown Strafer, members of the Class of 1971. In the 2018-19 academic year, W&M will commemorate the 100th anniversary of coeducation at the institution. 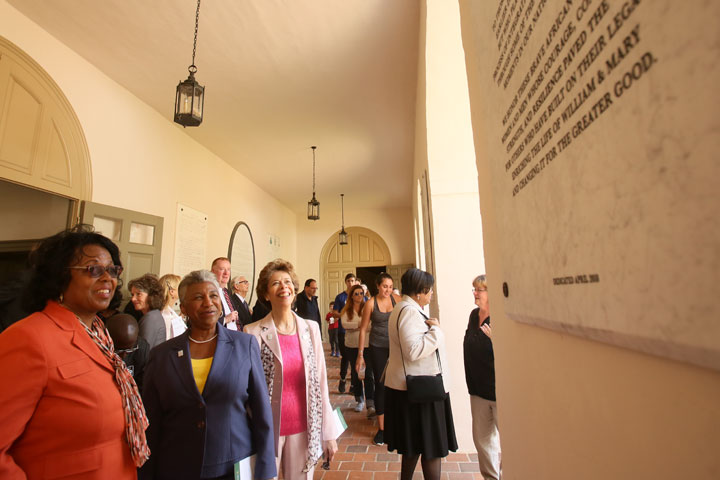 Women and African-Americans have been a part of W&M since its beginning, said Susan Kern, executive director of the historic campus.

“Like most other early American institutions, W&M has a long history entangled with slavery, Jim Crow and resistance to change. Like other seeming bastions of male privilege, women underpinned the fabric here also,” she said.

“What these tablets do is mark the moment when W&M promised change, the moment when first white women, and almost a half century later, African-Americans, entered here under the assurance they could be students, scholars, professionals – in short, they could be peer and equal to the men served at this fountain of knowledge for its first two-and-a-half centuries.”

Pointing out that the Wren Building is often referenced as the “soul” of W&M, Jacqui McLendon, chair of the 50th anniversary committee and emerita professor of English, said that she finds that term striking as it is also often used to embody African-American culture.

“Therefore, it is particularly fitting that the names of the three women, Lynn Briley, Karen Ely and Janet Brown Strafer, who were the first African-Americans to be fully integrated into the academic life of this university, along with a reference to earlier pioneers who had been denied full access but played a key role in the process of integration be prominently and forever integrated into the soul of the College with the installation and dedication of this beautiful plaque,” said McLendon, who who honored Friday with a resolution from the Board of Visitors for her work on the commemoration. “We will continue to build upon the richness of their legacy not just for this academic year, but for all time.”

Val Cushman, director of alumnae initiatives and co-chair of 100th anniversary committee, said that women were brought into the university at a time when it faced closure due to low enrollment during World War I. While the first 24 were all white women of privilege whose families could afford the tuition, they went on to live lives of service, she said.

Emily Moore Hall, one of those first 24, went on to receive a master’s degree at the university and then worked William & Mary’s Office of Institutional Research.

“Those first 24 women all were pioneers and all allowed William & Mary to claim a spot as the first public or private formerly all-male institution in Virginia to admit women,” Cushman said. “Today, built on their shoulders, William & Mary has over 55,000 alumnae who are doctors, scholars, teachers, entrepreneurs, actors, members of Congress, world-class coaches and university presidents.”

The 100th anniversary commemoration will center on the theme of inspiring, empowering and leading, she said.

“These words reflect the first 24 women, whom we are recognizing today, and they reflect the many women who have and will come after them,” said Cushman. “President Reveley, the time has come to recognize in this iconic Wren Building those women who laid the foundation for so many others.”

At the conclusion of the ceremony in the Wren Yard, Briley, Ely and Strafer, followed by the Hall brothers and their mother, led attendees through the Wren Building to see the plaques that hang prominently on the piers of the portico.

The three alumnae — known collectively as the “Legacy 3” — were surprised to see the size of the plaques. They later said they thought the plaque would be much smaller, like those awarded to individuals, and that it would be hung elsewhere in the building.

“I’m overwhelmed. It’s more than I ever expected,” said Briley.

“You see these famous names in marble across this campus, and we never thought ours would be,” added Strafer.

“And they’ll be there as long as the building is here and that’s what I can’t fathom,” said Briley.

Although their great-aunt died when they were young, the Hall brothers said they remember her fondly and their family has always been proud of her position as one of the university’s first women students.

“She was soft-spoken, great lady,” said John Lesslie Hall, adding that her father was one of the “Seven Wise Men” who taught at W&M after the Civil War. Her brothers all attended W&M, so it made sense that when the opportunity presented itself, she did, too, John Lesslie Hall said. “I know she was proud to be in the first class here.”

“We’re very proud of Aunt Emily and her classmates and the College,” said Channing Moore Hall.

Elijah Levine ’18, outgoing president of the Student Assembly, was among the faculty, staff, students, community members and Board members who attended the event.

He said the plaques were an important step in the university solidifying its history and committing to continue grappling with the issues around it.

“There’s this hope that (the university) will make good on these promises to realize our values that reach up and realize equity,” he said.

Millie West, a longtime W&M coach, administrator and fundraiser who received an honorary degree from the university in 2017, was also in attendance.

“I think it’s fabulous,” she said. “And I think it should’ve been done a long time ago. But this is just right because women are rising, and they are making their faces and voices known. And I’m proud. I think it will also bring us together more than we have been in the past.”

At the end of a busy year and with Commencement – in which they will receive honorary degrees – still before them, the Legacy 3 said they hope the plaque dedication and other commemorative events at W&M this year and next will send a message.

“Hopefully, some of this will be inspirational for people to come and not think that it’s prohibitive still to come to William & Mary,” said Strafer.

“Hopefully, if they are seeing this in the community, they will know it’s not closed off and they have a right to be here.”