High school players visiting Kaplan Arena will get to know Bianca Boggs ’19 long after she graduates from William & Mary.

“We’re going to put a big poster of her up in our recruiting lounge,” Women’s Basketball Coach Ed Swanson said. “When recruits sit in there and they ask me what we’re looking for, I’m going to point to the picture.”

Off the court, she has been a model student and leader, Swanson said. A geology major, Boggs spends three or four mornings a week at William & Mary’s Virginia Institute for Marine Science with Professor Chris Hein finishing a senior research project focused on understanding the history of barrier islands from Maryland to New Jersey by studying sediment cores to evaluate environmental changes that have occurred over time.

“An exciting project,” Geology Professor Chuck Bailey called it. “The results not only provide context of past change along the islands, but may point towards future trends as sea level continues to rise throughout the 21st century. Bianca is a remarkable student.”

Once she leaves VIMS — “lots of miles a week,” she joked — it’s back to campus for class, practice, working out and tending to the bumps and bruises that come from being the player opponents focus on most.

“She's unflappable in the classroom, the lab and the field, never getting too high or too low,” Bailey said. “Given the way Bianca plays basketball, her academic presence comes as no surprise. The geology faculty are completely impressed at how she manages both her academic and athletic responsibilities with grace and integrity.”

But as the Tribe travels to Newark, Delaware, to begin play in the CAA tournament Wednesday at 2:30 p.m. against the College of Charleston, it’s basketball that’s foremost on everyone’s mind. If W&M is to advance, Boggs figures to be a catalyst.

A 5-foot-8 guard, Boggs has progressed from All-CAA rookie team member to become a two-time All-CAA selection and two-time All-CAA defensive player. Her 17 points, 7 rebounds, 4 assists and 2.5 steals a game is testimony to the all-around effectiveness of her game. At 489 points, she needs just 34 more to set the school record for most points in one season by any W&M player ever. And her career total of 1,404 points, and counting, ranks sixth in a program whose history dates to 1919.

Not bad for a player who didn’t even score 1,000 points in high school. Boggs said she played on a team filled with Division I-caliber players, and it wasn’t her place to score.

That may be, Swanson said. But he and his staff were bowled over by her potential to be the kind of weapon she’s become.

“It’s kind of odd,” he said. “Most kids that get a Division I scholarship are usually the leading scorers and earn all of the individual accolades. She 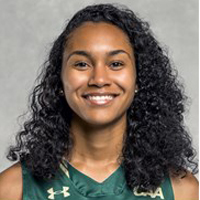 was just a good athletic guard that we thought would be a great fit for William & Mary.

“From an academic standpoint she was top notch. She was a top-notch individual. We knew she had the potential, but from a basketball standpoint, the jury was out. We thought she could have a terrific career.”

Others saw it, too. As a sophomore, Boggs was a valued role player on a team that featured scorers Marlena Tremba ’17 and Alexandra Masaquel ‘17, but capable of more. Then she scored 18 points in a win over an Old Dominion team that featured WNBA draft pick Jennie Simms, a prolific scorer.

Days after the game, a coaching colleague of Swanson’s phoned him and asked, “Does Bianca know she’s the best player on the floor?’

“And I said, ‘No, that’s the problem. She doesn’t know that yet.’ Last year, she figured it out. She knew she was one of the best players on the floor. It just took her time.”

Last season, Boggs was the second-leading scorer in the CAA at 15.2 points per game and made her first appearances on the All-CAA and All-Defense teams. There was no great epiphany, she said, just the sober realization that with several key players having graduated, it was time for her to accept a deeper responsibility.

"I always have been pretty confident in my abilities," she said. "It was more I felt that responsibility coming into my junior year ... I just kind of assumed that mentality, that scorer's role on the wing, knowing that I was probably going to have to step up to fill that void. Nothing really too drastic. I spent a lot of time working out that summer, preparing to be the main scorer."

That work ethic, she said, comes from her parents, Eric and Camille. They raised two other children, juggled various inconvenient work schedules, ferried Boggs to a private high school that was an hour's drive from their Waldorf, Maryland, home and did everything they could to see to it that their daughter could be a success.

"Knowing that I'm blessed to be in this position, to go here and play basketball, I want to make the most of my time here and my abilities,” she said. “Really, my mindset is being the best and to do everything I can to be good."

With her playing career coming to a rapid close — having started playing basketball at 6 and having no desire to pursue it professionally — Boggs has little trouble tagging her best game.

It was a 77-72 victory at Drexel in Philadelphia in early February, and Boggs scored 32 points. But that only tells part of the story.

The game lasted three overtimes, 55 minutes. Boggs played all but three of those minutes and scored 14 of the team's 20 extra-session points.

"It was the first time we beat them there," she said. "It was the way we did it, really having to persevere. A lot of the team was in foul trouble. I did score a lot of points, but it was the way we handled ourselves and gutted out that win. That meant a lot to me personally and to the other seniors."

"She's a kid that worked at it and got better," he said. "We couldn’t be prouder of her accomplishments."