Visiting Assistant Professor of Government Jackson Sasser and eight William & Mary students quietly passed through the National Memorial for Peace and Justice, gazing upward at names and places as they reflected upon acts of racial terror and their modern-day reverberations.

They walked beneath tombstones of sorts, burnt red steel plinths that carried even more weight than their coffin-sized frame would suggest. Each monument was inscribed with the name of a U.S. county in which at least one racial terror lynching took place between the end of the Civil War and the beginning of WWII.

There are more than 800 monuments total, representing more than 4,300 African American victims. Those are just the lynchings that are documented.

The visit to the National Memorial for Peace and Justice was a pillar of Sasser’s COLL 300 Study Away course this summer, with its one week ‘away’ segment taking place in the heart of the civil rights movement: Montgomery and Birmingham, Alabama. Titled “Honestly Remembering Together,” the course encouraged students to draw connections between the legacy of extra-legal violence (like racial terror lynchings) in the United States and modern-day capital punishment.

“I’ve never been a part of anything quite like this,” Sasser said. “I think it’s probably the most important thing I’ve done professionally. Our students — and the women and men who were kind enough to visit with us — were extraordinarily moving.” 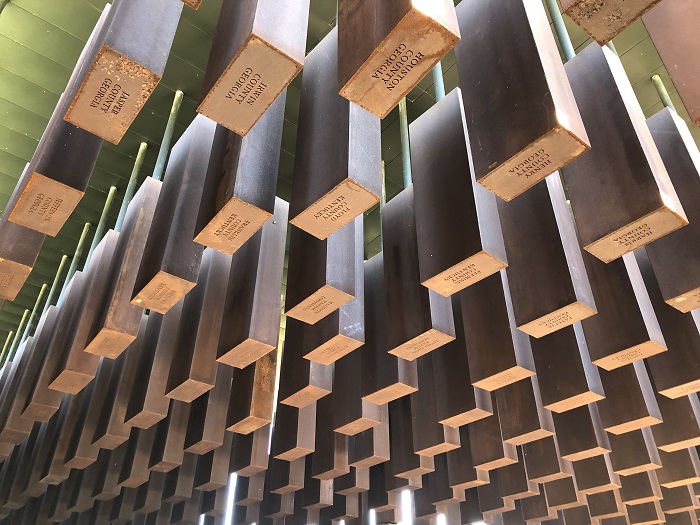 The trip was just as moving for Sasser’s students. While the course explored subject matter that was painful and disturbing, the trip provided them with high-impact learning experiences that shaped their understanding of society.

“It was easily a highlight of my college career,” Micaela Wibberly ’21 said. “I initially expected it to be a really disheartening experience, knowing that our trip was focused around the lynching memorial and the inequalities that continue to exist in our country. But I think what I got out of the experience was a message of hope. We learned a lot about the history of the civil rights movement. We also met with people who are pursuing equal justice and racial reconciliation in the present day.”

Sasser said the idea for the course came after speaking to the 1693 Scholars program. Sasser spoke about two of his seminars — “Race, Law, and Memory” and “Death is Different,” a capstone course on modern capital punishment — which consider the kinship between the modern criminal justice system and the Jim Crow South.

1693 Director Dan Cristol, who is also the faculty director of undergraduate research with the Charles Center, suggested Sasser meet with Director of Study Away Chelsie Craddock to brainstorm logistics and develop a program proposal. Sasser then created a course syllabus, a daily travel itinerary and expected expenses for the trip.

As with all Study Away program proposals, the Charles Center provided financial and logistical support for the off-campus component. The Charles Center worked with Sasser to finalize the itinerary, coordinate travel and lodging arrangements for students and faculty, and booked tickets and tours for the museums and site visits. Without that help, Sasser said the trip would not have been possible.

“The details are almost endless,” Sasser said. “With the Charles Center’s support and the counsel of several of my senior colleagues like Professors Jennifer Bickham Mendez, Rowan Lockwood and Silvia Tandeciarz, we were able to pull it off.”

Director of the Charles Center and Dean for Interdisciplinary Studies Teresa Longo noted, “Study Away is a signature program of the Charles Center as it combines the two pillars of the center’s mission of mentored research and interdisciplinary study. This initiative, developed five years ago, has allowed faculty across disciplines to take their courses off-campus and around the world. The students in Professor Sasser’s Study Away program will carry their experiences in Alabama with them far beyond their time at William & Mary.”

The Charles Center is now accepting Study Away proposals for spring 2020 through spring 2022. Faculty members who would like to propose their very own Study Away program can apply now.

A second iteration of “Honestly Remembering Together” is among the government department's offerings for spring 2020, and Sasser said he hopes it can become an annual course.

“I’ll take as many of our students as they will let me,” he said. 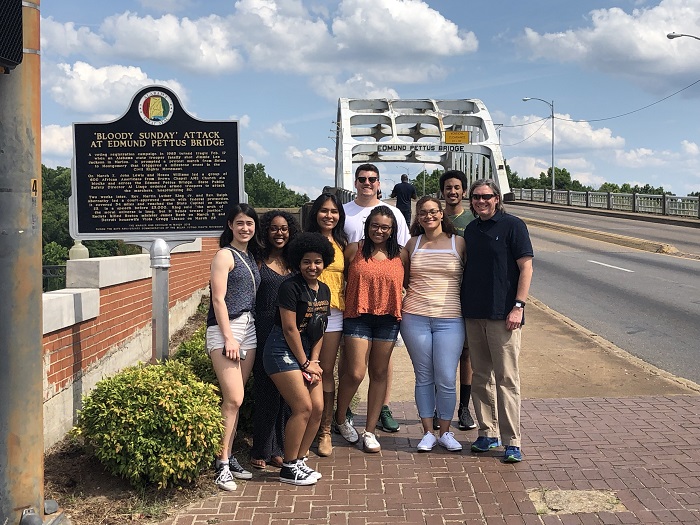 With his syllabus in place, Sasser assigned readings to get the students up to speed on the subject matter. Selections included a transcript of Dr. Martin Luther King Jr.’s December 1955 speech at Holt Street Baptist Church in Montgomery, memoirs from activists of the Montgomery Bus Boycotts, a recent Department of Justice report on the conditions inside Alabama prisons, and local news articles about the history of slavery in Hampton Roads.

While in Alabama, Sasser and his students toured civil rights landmarks, like the Freedom Riders Museum, the Birmingham Civil Rights Institute, and the Edmund Pettus Bridge in Selma. They also met with several experts and practitioners who are carrying on the legacy of the Civil Rights Movement and working for equality to the current day. Sasser said those discussions were “the heart of the course and the heart of the trip.”

One of the many speakers that stood out to the students was Aylia McKee, chief public defender in Montgomery County.

“One of the first things McKee said to us was that the American criminal justice system ‘Isn't the best, but it's the best we got.’ She plainly described instances in which discrimination and stereotyping occurred in past cases,” Aleyah Gowell ’20 said. “It was unnerving to learn of these injustices, but it was more so reassuring to meet so many enthusiastic young attorneys who are dedicated to advocating for their clients and combating these wrongful assumptions.” 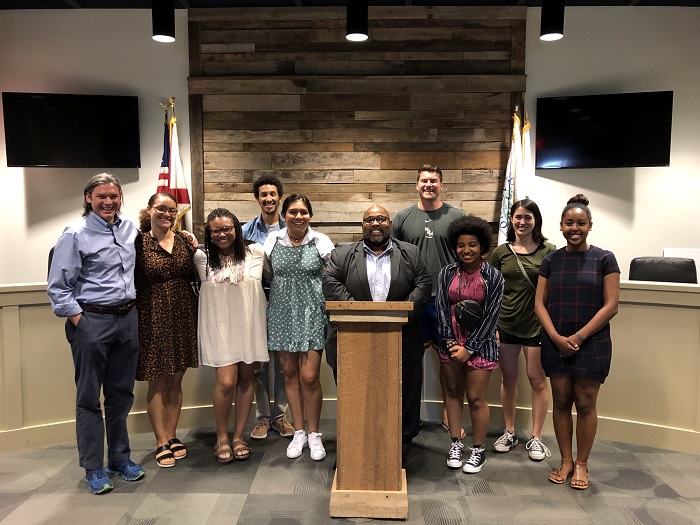 They also met with representatives of the Alabama Appleseed Center for Law and Justice, Senior United States District Judge Myron Thompson, the president of the Shelby County NAACP, and several officers from a Probation and Parole Check-In Station, among others. They even took a tour of the Negro Southern League Museum where they happened to meet three former players. One, James “Jake” Sanders, was kind enough to give the group a personal tour of the museum’s collection.

The substance of the class's conversations were often “heavy, to put it gently,” Sasser said, but he was routinely amazed by the engagement and insight demonstrated by his students. 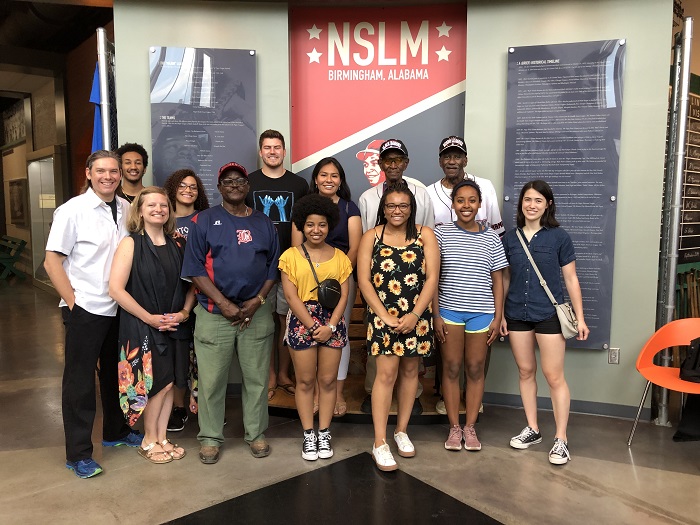 What’s in a name?

“It means that the present is deeply rooted in the past,” Wibberly said. “A lot of the inequalities we face today can be traced directly back to the legacy of slavery — we can’t address our current problems without also recognizing the role our history played in creating them.”

Sasser said he made sure ‘together’ was not just a word in the course title, but a theme of the trip. He wanted the group to bond over their shared experience. Each night, after their scheduled events were complete, Sasser would ask his students if they would “like to be a family tonight.”

They always said yes, and spent their nights bowling or watching movies together. They even went to a minor league baseball game on Father’s Day to honor the trip’s ‘Dad,’ baseball and Atlanta Braves fan Sasser.

“They were also just a blast to be around,” Wibberly said about the group. “I really loved that, while we took the subject matter of this trip seriously, we were still able to have fun in our downtime. I'm glad we are already making efforts to stay in touch.”