There are 5,827 civilians working at Langley Air Force Base in Hampton, Virginia. Each has a story, but none like the one belonging to their colleague, Michael Davis.

Davis, a 34-year-old graduate student at William & Mary who is on pace to earn his Masters of Business Administration from the Raymond A. Mason School of Business in 2021, is legally blind. That’s primarily the result of an auto accident suffered by his mother, then pregnant with him, that demolished their car and nearly killed him. She lost amniotic fluid and after Michael was born, he was also found to have congenital glaucoma. Numerous surgeries didn’t help.

He can recognize a solid color, such as white, but anything multi-colored to him resembles something from Salvador Dali’s surrealism period. Davis can see a person’s face, but not the expression on it. He sports a 3.85 grade-point average and carries a civilian rank equivalent to major as a contract specialist at Langley.

A 2007 graduate of the University of Richmond, Davis asks little of his graduate-level professors at W&M. Can he have class handouts in larger print? For a recent exam, he requested a study room at the university’s Peninsula Center in Newport News so that he could spread out his materials. His professors have graciously complied, he said.

In several ways, there is a Forrest Gump quality to Davis’ life, though one stands out from the rest.

Gump, the fictional title character of the 1986 novel and 1994 film, possessed an unnatural ability to run outrageous distances. But Davis has him beat. Not only has he run 16 marathons, including the Marine Corps Marathon twice and the famed Boston Marathon three times, but also between 40 and 50 half-marathons and more 8K and 5K races than he can keep track of.

On top of that, most times he pushes a wheelchair in which sits a fellow person with disabilities.

Rarely, if ever, chosen for teams by other kids because of his disability, today he proudly says, “Now I get to make sure that people with disabilities are included in races.”

There was one notable exception to that regimen. Other than his guide runners, companions who provide verbal assistance, Davis was uncharacteristically alone and a half-mile from finishing the 2013 Boston Marathon when two homemade pressure-cooker bombs were detonated near the finish line. The explosion killed three and injured hundreds of others.

An unexpected, inexplicable factor may have saved his life.

“I was having leg cramps, which doesn't ordinarily happen,” he said. “But at mile 25 or so I could not move. I didn't even know what to do. I was trying to work out the cramps, but it's a good thing I stopped because I was supposed to finish right when the bombs went off.”

Ten years ago, Davis joined two organizations that he said changed how he looked at being blind: The National Federation of the Blind and the Blind Lions Club. It was the latter that sparked something inside of him he never knew existed.

“They had a race called ‘Journey for Sight,’ a 5K that was at Fort Monroe,” he recalled. “They said, ‘You should run this’ and I said, ‘No, I’m legally blind, and I’m going to hit a wall and fall and be in the hospital and have a surgery and I don’t want to do that.’”

He was assured that blind people run all the time, and that they’d set him up with a guide (companion) runner. He finished third in his age category.

“I was really surprised,” Davis said. “I’m not very good at sports and I’d never had that before.”

Not long after, he ran a 5K in support of the Children’s Hospital of the King’s Daughters in Norfolk, where he learned about Team Hoyt. Since 1977, Dick Hoyt and his son, Rick, have completed well more than 1,000 endurance races together, with Dick pushing Rick, who has cerebral palsy. Included are marathons, duathlons, triathlons and ironman competitions. They even ran and biked across the United States in 1992, covering 3,375 miles in 45 days.

“I got really addicted after that,” he said. “It was really a lot of fun.”

His primary partner during the last seven years has been Ashton McCormick, a high-functioning 20-year-old man with autism, ADHD and congenital hypotonia, or low muscle tone. They have engaged in countless practice sessions and completed at least 10 races together, including the 2018 Boston Marathon. There they became the first duo – a two-person team in which one athlete pushes another in a specialized racing chair – comprised of a disabled runner and disabled rider to finish the race. 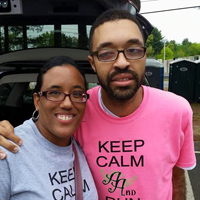 McCormick’s autism inhibits his ability to communicate, but mom Jenn McCormick said that the Davis family and the McCormicks have a relationship that goes beyond racing.

“He’s attended races for my younger son, we’ve gone to the movies together, we’ve shared birthday parties together,” she said. “Michael and (Davis’ wife) Reneka are a couple of people that we know we can rely on to leave Ashton with . . . I can’t say that about very many people.”

Davis has received his share of media attention in recent years, though he’s not sure how many people have been affected by his story. He also gives the occasional speech, the first of which, at a Portsmouth church, became one of his most rewarding experiences.