Authors don’t set out to write half of a biography on their chosen subjects, thus it was with a sense of resignation that William & Mary History Professor Christopher Grasso welcomed “Bloody Engagements: John R. Kelso’s Civil War” into the world a few years ago.

He had come upon Kelso’s story, at least a tantalizing portion of it, while researching a book titled “Skepticism in American Faith,” which detailed the country’s spiritual crisis between the Revolutionary and Civil wars. Kelso, who began life as a Methodist minister, was one of the examples of a faith crisis, and Grasso felt lucky to study an 800-page treasure trove of his manuscripts, poems and lectures, with an autobiography tacked on at the end.

“He wrote these very rich and evocative tales about his Civil War experience, but they break off in 1863,” Grasso said. “You come to the last page, and it just stops. I thought the rest of the story — he lived until 1891 — was lost.

Grasso was sitting in his office one day in 2016 when the phone rang, and a transformational conversation ensued. A man identified himself as Kelso’s great-great-great grandson and said he possessed “some manuscripts” the Kelso family had passed down generation to generation.

“I literally leapt out of my seat and started pacing around my office because I'm thinking 'What if, what if, this is the lost second half?'” Grasso recalled, the excitement in his voice still evident three years later. “He was in Seattle and I was trying to figure how to see him, and he says he's coming to Bethesda, Maryland, over Thanksgiving and he'd be happy to bring the manuscript with him.

“A month later I'm sitting down with what in fact turned out to be the lost second half. Another 80,000 words. And historians had never seen this stuff before.”

It won’t be long before they do. Grasso is close to finishing repurposing half-a-million of Kelso’s words into a new book: “Teacher, Preacher, Soldier, Spy: The Civil Wars of John R. Kelso.” A publication date for the complete biography has yet to be determined.

The title of the book doesn’t begin to cover all of the twists and turns in Kelso’s serpentine, often gruesomely dysfunctional, 59 years of life.

The preacher abandoned religion and became agnostic after the dissolution of his first marriage. Later in life, he would lecture on the disappearance of God.

The teacher became fiercely pro-Union prior to the Civil War. Standing before a hostile group of armed Confederate sympathizers in his combative Missouri hometown, he berated them for being “traitors.” 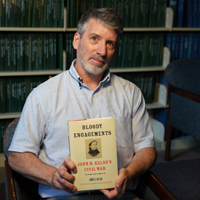 When his Southern-sympathizing neighbors burned down his home, he turned his rage against the Confederates, those responsible and not. When his second wife had an affair with a Union physician while he was off fighting, he channeled that humiliation into further hatred of the Rebels.

Kelso ultimately became a guerrilla fighter who stalked through the Ozarks in Missouri and made good on his vow to kill 25 Confederate soldiers with his bare hands. Frequently disguised as a Confederate, and often alone, he tracked unsuspecting Rebels for the kill. His writings make clear that he took “wild delight” and enjoyment in that endeavor.

But Grasso pointed out one peculiar occasion where he exhibited an inexplicable respect for the traditional trappings of war.

Kelso had killed one of two Confederate brother officers in his cabin and found the other in a different cabin, a sheet pulled over his head and presumably dead. Pulling back the sheet, he glanced at the man’s frightened wife then bent and whispered, “You are not dead, and you know it, and you know that I know it. And now let me give you a little good advice. If you recover from your present wounds ... go south and fight like a man for your cause. And when you are gone, remember that it was Kelso that saved you.”

His war exploits led to his election to Congress from Missouri, a short-term assignment. Infuriated by President Andrew Johnson’s proclamation for amnesty towards almost all former Confederates, military leaders included, Kelso was among the first members to call for Johnson’s impeachment.

“He's a complicated character, very intelligent, a very good writer,” Grasso said. “He thinks very deeply about what he's doing, but he does respond very passionately about what happens in his life. He doesn't go halfway about anything.”

After a 10-day post-war period in which one of his sons died and another — just 14 — committed suicide, Kelso fled Missouri for California, hoping for a new life. It didn’t work. Ultimately, he returned to teaching and penned some of the vast manuscription with which Grasso has become so familiar.

One of the few people to have seen Kelso’s memoir in the 19th century said that his "life reads more like romance than reality." This naturally leads to the question of the authenticity of Kelso's war claims. Grasso’s extensive research provides the answer.

Regarding his Civil War career, “I can measure what he says with the official records,” Grasso said. “What's most interesting is when I can see a battle from Kelso's perspective and from the field commanders’ perspective and then from the Confederate perspective. What you get are really three different views of the same event.

“In the Civil War material … when I can check what he says against the records, he is not making things up. For a historian, it doesn't get much better than that.”