From May 25 to 28, the team of 28 players will be in Milwaukee, Wisconsin, with 19 other schools vying for the championship. William & Mary has been there before, albeit 14 years ago. The games will be streamed on ESPN online and ESPNU.

W&M’s team — called Darkhorse — sports a 35-7 record entering the nationals. Its path there started when it won its conference tournament, beating other Virginia schools, to advance to the regionals. There, a 14-9 victory over Virginia Tech secured third place for W&M and its berth in this week’s championship tournament.

“Making college nationals has been a dream of mine since high school,” said Gus Norrbom ’20, “and it is difficult to describe the joy and sense of fulfillment that this accomplishment brings.”

W&M will be joined in its bracket by North Carolina, Minnesota, Texas and Connecticut, making it by far the smallest school.

Darkhorse will open play against Minnesota at 9:30 on Friday, followed by a 1:30 match with Texas. On the 26th, the Tribe plays Connecticut at 1:30 and North Carolina two hours later.

“There’s been a nice progression the last three years,” said coach Peter Rosenberg, a W&M graduate student in physics. “When I first joined the team, we were sort of fighting our way up, finishing maybe fifth or sixth. Last year we got into regionals but finished right outside of a bid to nationals. Now we’re there.”

For those unfamiliar with the basics of Ultimate Frisbee, the field is 70 yards long, 40 yards wide, with a pair of 20-yard end zones.

Seven players take the field for each team. Each team lines up at its end zone, and one team throws the disc to the other to start play.

The idea is for the quarterbacks — called handlers — to pass the Frisbee to cutters running up or across the field. The offense ultimately wants to reach the end zone, earning a point. A player who catches the disc must stop running as soon as possible and then has 10 seconds to pass it to a teammate or the opponent takes control.

Matthew Straus ’18, who just graduated with degrees in history and economics, called the ability to control the disc one of the team’s best attributes. 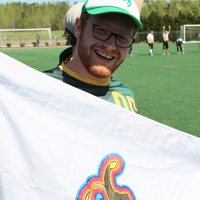 “We’re known for being pretty patient,” he said. “We’re not the most athletic team, but we’re very solid with the disc and the fundamentals. We can make a lot of throws and lot of catches until something opens up for us.”

Normally, the game is self-officiated. Defenders guard, but bodily contact is not allowed. Players can call a foul against a defender for bumping or jostling. In this tournament, there likely will be an official watching who will rule whether such calls are valid.

Substitutions are made after a point is scored.

“A lot of teams run the same guys over and over, but we have a really deep team so we can always have fresh lineups,” he said. “We have the ability to play long points and wear teams down.” 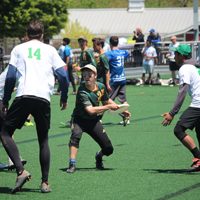 Norrbom attributes it to three factors: years of hard work by alumni that has led to a large and talented senior class, a strong rookie class that has worked beyond practice and the team's focus on aggressive defense and stingy, possession-based offense.

For Straus, the seminal moment of the season, and perhaps the program’s recent history, was a victory over UNC-Wilmington in the regionals.

“When I joined the team, they seemed like one of those scary teams that we just thought we never had a chance against,” he said. “Beating them was like the white whale for us. We showed that we’re at their level now, which is big.”