One of Sheila Johnson’s admirers recently wrote that her friend embodies “the qualities of a mother-aunt-sister-friend-mentor, and as the years go on, grandmother and great aunt might be added to the list.”

Those nurturing qualities make Johnson, who is a preschool III lead teacher at the Williamsburg Campus Child Care Center, a deserving choice to be the 2018 Charles and Virginia Duke Award winner.

Established in 1997, the purpose of the award is to provide recognition and financial reward for individual accomplishment and exemplary service to William & Mary. All non-student, non-instructional faculty employees of the university, or one of the contractors providing auxiliary services to the university, are eligible for consideration.

The ceremony honoring Johnson will be held on April 23 at 4:30 p.m. in the Great Hall of the Wren Building.

For 26 years, Johnson has worked at the Williamsburg Campus Child Care Center, part of W&M’s Auxiliary Services. For about 20 of those years, she has taught three- and four-year-olds.

At the end of her first week on the job, however, Johnson said she wasn’t sure she’d gotten into the right business. A career in nursing preoccupied her thoughts.

“I was a little skeptical,” she said. “It was a little chaotic. I’d worked with kids before, a summer program for two years. This was so much different. I felt like I didn’t know what I was doing.

“But the second week, I just found something intriguing about a conversation I had with a little boy who got me giggling about something. From that point, for the rest of the week, I started liking it a bit more and a bit more. As they say, the rest is history.” 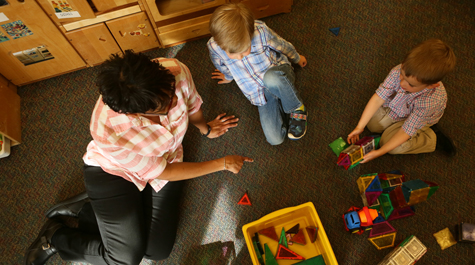 Johnson had been nominated for the Duke Award before, and one of her 2018 nominators wrote that the previous nominators “were delighted to hear that she was again being nominated. In fact, it created happy connections across generations of William & Mary families who benefited from (her) life work.”

Johnson, who has two daughters, a son and seven grandchildren, said she has no idea how many families or children she has worked with during her career. One of her nominators estimated as many as 400, and added that her “magic” rests in “making each child and parent feel like they are the only person in the room.”

“For many families, like my own, she has effectively become a surrogate parent, someone who lovingly nurtures our children while supporting and guiding parents as to their developing children’s needs,” wrote one nominator.

Yet another wrote that she was able to grow as a professional because “I knew my youngest was thriving in Miss Sheila’s class.”

That’s right, everyone calls her “Miss Sheila,” even when, as one nominator put it, “she is having eye-opening, difficult conversations.”

“It was Miss Sheila who gently, yet persuasively convinced me that we needed to pursue additional resources to get our child – now thriving by the way – back on track,” the person wrote. “And she connected some other parents who had faced similar issues with me, a network of support only she could have crafted.”

Phoned by President Taylor Reveley, who said he wanted to be the first to offer his congratulations, Johnson said she wasn’t sure what to believe.

“I told somebody that I’ve got to stop listening to that Steve Harvey Show in the morning because they do a prank segment,” Johnson said. “When I got that phone call from President Reveley, I kept saying, ‘Are you for real? Are you for real?’ I thought I was being pranked.”