One might say that the Exercise-is-Medicine program at William & Mary has hit the ground running.

In October 2017, W&M became a registered Exercise-is-Medicine campus with the American College of Sports Medicine. That organization instituted the program in 2007 to increase awareness of the benefits of physical activity and promote physical activity as a vital sign of health.

The W&M program’s leadership team did it by staging weekly campus walks led by faculty and staff, including one with President Taylor Reveley. They offered free “pop up” yoga classes weekly through Campus Recreation and free group fitness classes during fall and spring exams. They also highlighted programs and activities already happening on campus that promote physical activity, such as Campus Recreation’s Bee & Goody 5K, which last year drew more than 400 participants, as well as the various events coordinated by the W&M Bike Alliance.

They also provided opportunities to learn about the physical aspect wellness and its seven other dimensions: emotional, environmental, financial, intellectual, occupational, social and spiritual.

Although the program is aimed primarily at students, last week a record 32 faculty and staff members participated in a 40-minute walk down Duke of Gloucester Street. Starting behind the Wren Building, the group stopped just long enough for Herbarium curator and faculty guest guide Beth Chambers to offer brief descriptions of some of the trees found along the way.

It was the final walk of the spring, said Jenny Ruehrmund, associate director of campus recreation for fitness and wellness. Having made a successful debut, and with an eye on gaining silver-level status, she and the rest of the program’s leadership team will soon start work on their fall program. 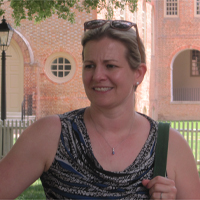 Concerned about resources, the decision to start an Exercise-is-Medicine program at W&M was several years in the making. Conversations with Health Center Physician David Dafashy helped get things rolling.

“He was particularly interested in reaching the students he sees in the Health Center with anxiety or sickness that could benefit from physical activity,” she said, “but who   might not want to come to the rec center. Maybe it was the distance. Maybe they were feeling insecure or were not advanced exercisers.

“So we discussed providing students with opportunities to get physical activity and learn about other wellness resources outside of the rec center. I told him about the Exercise-is-Medicine initiative, and he said it sounded perfect.”

“Our mission was really to get a couple of walks up and going as something that was tangible; that we could do quickly and did not require a lot of energy and time,” Ruehrmund said.

The team added another component intended to make the walks more appealing: faculty guides. Burnet led the first. Dafashy led the second. Dorothy Ibes, a lecturer in the Environmental Science and Policy Program and the Center for Geospatial Analysis, led one on mindfulness. She also procured commitments from Geology Professor Chuck Bailey and Biology Professor Randy Chambers to lead others. 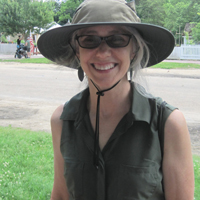 “We wanted to involve faculty members in order to reach a breadth of students around campus. There are many faculty members who are positive role models for health and wellness, and students respect and admire them,” Ruehrmund said. “Rather than campus rec being the ones spreading the message about physical fitness all of the time, we wanted to collaborate with other advocates for health and wellness on campus.

“It is the collective responsibility of our community to encourage physical activity amongst both students and faculty and staff members.”

Among the things Ruehrmund feels best about is the fact that the Exercise-is-Medicine program has inspired others, such as the School of Education and the Staff Assembly, to lead their own walks. She’s hoping the university can achieve silver status this February.

“We’re not looking to reinvent the wheel,” Ruehrmund said, “but to enhance what we’re already doing.”