Many political scientists believe that face-to-face diplomacy has little, if any value. Some even call it dangerous. Regimes change. Leaders lie. They change their mind. The priorities of their country change. It’s impossible to look inside another person’s heart or mind and glean what they really mean or intend.

Researchers point to British Prime Minister Neville Chamberlain, who in 1938 traveled to Munich and seemingly avoided a war by agreeing to hand the Sudetenland to Germany after Adolf Hitler told him he wasn’t interested in invading the rest of Czechoslovakia. That was a catastrophic mistake.

They point to former U.S. President George W. Bush, who after meeting with Russian president Vladimir Putin at the Slovenia Summit in 2001, proclaimed, “I looked the man in the eye. I found him to be very straightforward and trustworthy. I was able to get a sense of his soul.”

However, those who engage in face-to-face diplomacy regularly, maintain it is invaluable in allowing them to do their jobs, said Marcus Holmes, associate professor of Government at William & Mary.

And Holmes, author of the new book “Face to Face Diplomacy: Social Neuroscience and International Relations,” agrees with face-to-face practitioners. The reason is social neuroscience.

“One of the more important discoveries by neuroscientists in the last 20 years is this idea that we actually have fairly refined access to the minds of other people; in face-to-face interaction, we get clues about the intent of other people and these clues, under certain conditions, can be quite accurate,” Holmes said. “A system in the brain that has generated a lot of excitement — the mirroring system — suggests that in face-to-face interaction we’re basically simulating for ourselves what occurs in the brain of the other person. It implies that we’re on a similar wavelength when we interact face-to-face, and that’s not the case when we interact via other modalities — speaking on the telephone, sending a cable, wire or tweet, even an e-mail. They don’t allow people to understand each other the way face-to-face interaction does. 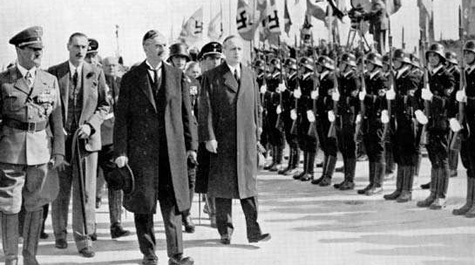 Holmes said that state departments and foreign ministries around the world are continually re-assessing how to engage. Does it make sense to pursue face-to-face diplomacy? To tweet? Send an email?

“One important implication of face-to-face diplomacy is that it allows you to read others, but it also means you can be read,” Holmes said. “Sometimes this is desirable, other times you might want to keep things close to the vest.

“In the book I try to develop the various conditions under which foreign ministries and state departments would want to pursue different types of diplomacy.” 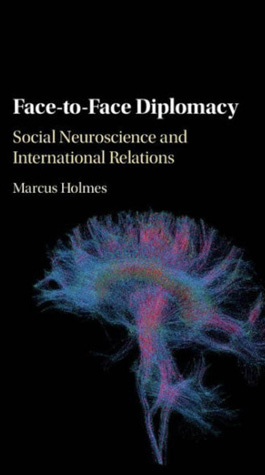 There is little question, Holmes said, that the current U.S. administration, under President Donald Trump, values face-to-face diplomacy. The president often talks about personal chemistry, about the value of liking other people and being liked on the international stage.

“I actually agree that these are important characteristics, and one of the keys of diplomacy is building personal relationships that can help you sustain through difficult times,” Holmes said. “The situation with North Korea is very precarious. North Korea has a lot of reasons to distrust the United States. The United States has a lot of reasons to distrust North Korea. The idea of engaging with the North Koreans, in this personal face-to-face way, is a good one when it comes to starting to build trust.”

Holmes said he was “optimistic” when Trump met with Kim Jong-un last summer. He was at least starting a dialogue to try and understand one another, something Holmes said the two countries haven’t had in a long time because the U.S. has not given North Korea the opportunity to say directly what their iintentions and concerns are.

“Do they simply wish to defend themselves from a U.S. invasion, in which case having a nuclear weapon certainly helps, or do they intend us harm?” he said. “Do they want nuclear weapons because one day they want to strike against the United States? I don’t think we’re able to answer that sitting in our offices in Washington, D.C., New York or Los Angeles.

“Ultimately if their concern is their own security, which I think is probable, reassurance will only come from them trusting us. And we need a relationship for that to happen.”

Holmes points to the Able Archer training exercises of 1983 as an example of where this question about intention was critical and how face-to-face interaction helped to answer it.

That year, despite heightened tension and distrust between the United States and Soviet Union, the U.S. and NATO launched the most realistic training exercise ever undertaken, Able Archer. It was a simulated conflict escalation that included an attack on the Soviet Union, one President Ronald Reagan was certain no one, especially the Russians, would believe was a real attack or a ruse to obscure a real attack. 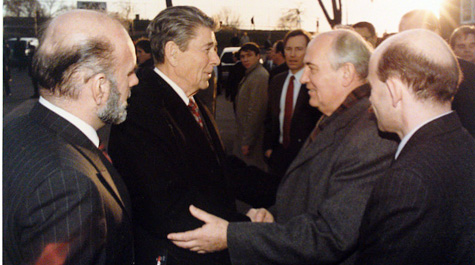 The Russians saw it as more than an academic exercise. They began ramping up their defense weaponry and readied their nuclear forces. Historians report that, fortunately, Assistant Chief of Staff for Intelligence for the U.S. Air Force in Europe Leonard Perroots did not order a counter-rise in the alert level of Western military forces, which the Soviets may have used to justify their fear of attack. The episode ended there.

“That moment is crucial for Reagan because it made him understand that he needed to get into a room with a Soviet leader, sit down and explain that not only was the NATO simulation sincerely a simulation, but that the U.S. and NATO had no intention of bombing or invading the Soviet Union,” Holmes said. “Because of Able Archer, he changed his approach to the Soviet Union, starting with the Geneva Summit in 1985.”

Through a series of meetings, Reagan worked with Soviet leader Mikhail Gorbachev to eliminate intermediate-range nuclear weapons through the INF Treaty.

“Reagan had the intuition that if he could convey sincerely that there was no intent to invade or attack Russia they’d be able to move forward,” Holmes said. “He was right.”