Maybe you and the person you’ve been dating are no longer an item, and it wasn’t your idea. Maybe you botched a test. Maybe there’s a problem at home that has just become worse. Maybe the allergies you’ve battled all fall just exploded into a full-blown sinus infection.

Bottom line: You’re feeling down and dispirited as you trudge to your campus mailbox. Inside, you find a letter, signed “From a friend.” The writer tells you to hang in there, that there isn’t a William & Mary student who hasn’t been in your shoes. You have friends on campus, people who care about you. They’re thinking of you and wishing you the best.

No, it doesn’t solve your problem. But you feel a little better. Maybe things aren’t as dire as they appeared a moment ago.

Score one for Campus Cursive at William & Mary.

That’s the official title of the club founded last spring by Amy Olejniczak ’19, who also serves as president. Kira Perzel Mandell ’18 is the vice president of membership and Alisha Mehdi ’19 is vice president for communications.

“Basically, our mission is to provide encouragement and positivity through hand-written letters, both on campus and in the local communities,” Olejniczak said.

About 15 students are active letter-writers. Earlier this week, the club asked students to nominate other students they thought could use a bit of written encouragement. Within the first 36 hours, more than 100 requests were received, all fulfilled within 24 hours.

“I had no idea people would be so receptive to that,” said Olejniczak. “It just goes to show that everyone needs a little bit of encouragement. It’s also testament to the power of the written word, especially in an era in which technology is moving so quickly and with college students being so busy and moving in a million different directions. It can be very nice having something lasting and permanent, assuring us that we are on the right path.

“One of the things I like most about William & Mary is the fantastic sense of community we have here. People look out for one another and they want to show others that they care.” 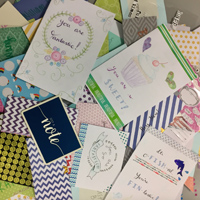 Olejniczak got the idea to form the club after reading a blog about an international non-profit organization called More Love Letters. She started writing letters for it then discovered that campus chapters existed.

“I was thinking, ‘Oh, I wish we had something like that here,’” she said, “and then it occurred to me that I should just bring it here. So that’s what I did.”

In addition to addressing students, Campus Cursive posts messages of encouragement in public places on campus, sends letters to local community organizations, even scribbles messages on the coffee sleeves found at Aroma’s inside Swem Library. In the near future, Campus Cursive plans to send letters to staff members, cafeteria workers and anyone else who makes the William & Mary experience more enjoyable.

Last spring, one of Olejniczak’s professors found a letter and brought it to his class, unaware that Olejniczak was involved in the club.

“He held it up and said, ‘I just want you to know that I found this and it gave me a little bit of hope,’” she recalled. “He said, ‘I think I’m going to keep it in my wallet from now on.’”

So now, Olejniczak said, faculty members are on the club’s radar. Even President Taylor Reveley can expect to find a little something waiting for him one day between now and his retirement.

“We want to let every member of the William & Mary community know that they are valued, loved and supported,” she said.