The beginning of Neal Courter’s career at William & Mary and its conclusion at Commencement on May 13 are bookends of unbridled excellence.

Courter will graduate with degrees in chemistry and French, and a 3.56 grade-point average. He was named a first-team Academic All-American Scholar-Athlete by the College Gymnastics Association three times. He was among those students receiving William & Mary Provost Awards for academic excellence three times.

Athletically, Courter was one of eight senior finalists nationally for the Nissen Emery Award, the highest honor in collegiate gymnastics, and akin to college football’s Heisman Trophy. That capped a career that started when he earned All-American status on the vault as a freshman.

All are remarkable achievements. But it’s what Courter experienced after that precocious freshman year that sets him apart from all but the fewest of his fellow graduates.

As a sophomore, Courter started struggling, becoming more reclusive. Always gregarious with a sharp sense of humor, he greatly reduced the amount of time he spent interacting with the gymnastics team or his friends. He began sleeping through classes and not being able to get out of bed.

“I was coming off such a successful first season of gymnastics and then everything started returning to normal,” Courter said. “There was all the excitement surrounding being able to compete in huge competitions against phenomenal gymnasts. It might have been that … sometimes, you can’t put a finger on what caused it.

“People realized I was struggling because sometimes I’d get frustrated and tearful in practice, but my team was always there to support me.”

Courter was diagnosed with depression, took a year off from competition and spent the spring 2016 semester home in Baton Rouge, Louisiana. Briefly — very briefly, he said — he considered not returning to W&M.

“But I knew I wanted to finish my competitive career and my education at a fabulous university like William & Mary, a place that I’d worked so hard for,” he said. “I definitely knew that it was necessary [to come back] and that I’d regret it if I did not.”

Courter filled the time away by taking a couple of courses at Louisiana State University, and by trying a new athletic endeavor: aerial silks.

“It’s a circus discipline where you have two pieces of fabric hanging from the ceiling and you do dance and flexibility and strength elements while wrapped in these two pieces of fabric,” he said. “It’s immensely entertaining and fun. Taking a class in that at the suggestion of a friend from home helped me to put things in perspective and realize that there was still joy to be had.”

The sabbatical also gave a knee injury he’d suffered in the spring of 2015 more time to heal. It took some time and a lot of tweaking, but Courter’s prescribed medications for depression began to take positive effect. The combination of better health, the ability to get back into gymnastics and the pleasure he derived from aerial silks “renewed my energy and vigor for the sport I loved for so long.” 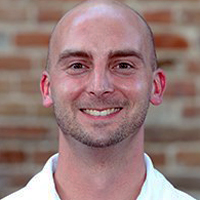 In addition to his nomination for the Nissen Emery Award, Courter won the ECAC championship in the vault and qualified for the NCAA championships in floor exercises and the high bar.

Academically, his array of extracurricular duties include being a teacher’s assistant and tutor in the French department for three years, as well as a student grader in French and German, where he said he has “provided insight into what students are struggling with.” He even taught some undergraduate French classes, a “practicum-type” experience.

“I really enjoyed it, although it was very difficult,” he said. “It puts into perspective the work the professors here put in day in and day out.” 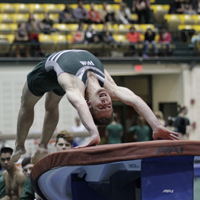 In June, he’ll be in Florida auditioning to be a stunt performer at Disney World, and he should know within a month which direction his early career will take.

“A lot of Tribe gymnastics alumni have gone on to do things like that,” he said. “I’ve been in contact with them, and they’ve been giving me advice. What they’re doing is amazing and inspiring, and hopefully I’ll get to follow in their footsteps.”