Members of Christopher Del Negro’s lab are back from an international neuroscience conference in Copenhagen and need to get ready to move to new facilities in William & Mary’s Integrated Science Center.

But late July saw no evidence of packing (or unpacking) in the lab — just neuroscientists in white lab coats working to further the understanding of how the brain controls breathing.

Del Negro is the chair of William & Mary’s Department of Applied Science. His investigation into the neural control of respiration is intertwined with his own dual role of investigator/educator. The same blending of instruction and inquiry helps both junior and senior members of the lab as they work together to probe the secrets of the pre-Bötzinger complex, a surprisingly small area of the brain that generates the rhythm of breathing.

Del Negro refers to the makeup of the lab as a “multi-level model.” It’s not unique to his lab or department, but multi-level labs like his are surprisingly rare outside of William & Mary.

“That’s what makes William & Mary special. PIs like me, we’re here because we like students. We really like training undergraduate students,” Del Negro explained. “But in order to do that effectively and to keep our research at the top of our game, we need to have Ph.D. students as well.”

Doctoral students are part of the multi-level lab model, which also includes post-doctoral researchers and the PI — the principal investigator — at the top of the pyramid. And the model also includes undergraduate students, even though the Department of Applied Science doesn’t offer an undergraduate major program.

The multiple-level model allows William & Mary labs like Del Negro’s to operate in the sweet spot between the undergraduate-only and big-research extremes in higher education, typically staffed only by post-docs and a few graduate students, an environment in which undergraduates are only rarely involved.

“Our faculty do research at the highest level; we’re internationally competitive. But we welcome the youngest trainees,” he said. “As a matter of fact, in summertime, I have high school interns working in the lab.”

Del Negro said that around a year ago, he saw that he had a particularly strong group in his systems neuroscience lab, a group that was just about ready to share their work with the world’s top neuroscientists. He started organizing a trip to the big time: the biennial congress of the Federation of European Neuroscience Societies (FENS).

“I wanted to take them to a really good meeting, because of the extraordinary accomplishments that the students were making,” he said. 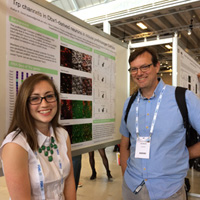 The multi-level model in Del Negro’s lab usually operates on the basis of teams working in parallel, with Del Negro providing the overall mentorship and leading the research. Each team is headed by a Ph.D. student or a postdoc who guides and implements the research protocols. Each team includes one (or more) undergraduate students actively engaged in the investigations and analyses, as well as in the writing-up of specific projects.

Three of the lab’s teams presented papers at FENS. The Martin-Kottick team presented a paper in the neural development session. The Pham-Vann and Dorst-Picardo teams both presented in the sensory and motor systems session.

Del Negro chaired a symposium at FENS, titled Cellular and Synaptic Origins of Walking, Running, Chewing, and Breathing. Among the participants was Ole Kiehn, of the Karolinska Institutet in Stockholm, a member of the Nobel Committee in Physiology and Medicine.

“FENS was an excellent meeting,” Del Negro said. “There were not a lot of undergraduates there. Most people were very surprised to find that three of my students were undergraduates, given the quality of their work.”

He said that his undergraduates walked into FENS with the intellectual background and laboratory chops to benefit from the presentations of the world’s foremost neuroscientists.

For instance, Carly Martin attended a talk by Bosiljka Tasic from the Allen Brain Institute. Tasic discussed a technique for sequencing the entire transcriptome of neurons, a cell at a time. Martin’s senior honors thesis is based on experiments using this method, “so I spoke with her more in-depth after the symposium. I left the conversation with new insights into how I should approach my investigation, as well as contact information and support from a scientist I admire,” Martin said.

The other two undergraduates also returned from FENS with new insights. Kaitlyn Dorst was inspired by a symposium on the genetic regulation of stress to pursue graduate education in the field. Francis Pham picked up new lab methodology.

“I was exposed to a technique where one simultaneously modulates and records neuronal activity in a new type of transgenic mouse — a procedure I had never even imagined possible,” Pham said. “The FENS conference also allowed me to develop my interpersonal skills. I not only gained information but was also able to offer suggestions to the researchers.”

And the junior members of his lab “did a fantastic job” of presenting their own work at FENS poster sessions, Del Negro said.

“Poster sessions are good, because there’s back and forth, whereas at a lecture, the students are just listening,” he said. “A poster session gives the presenter and the audience the chance to interact a lot more.”

The poster session format also allowed Del Negro to watch his students in action, discussing and explaining their work to the field’s leading scientists. He said it was a bit of a revelation to see his undergrads holding their own in science’s marketplace of ideas.

“When we’re in the laboratory, the projects evolve slowly as we gain more data and work toward publication,” Del Negro explained. “At the FENS meeting, I was able to watch my students present posters to leaders in the field, people I know and respect. And I was able to see them do it correctly and it made me extremely proud.

“I thought, they’ve got it. They know what the science is about.”